In the 1950s, August Width and his wife Jenny moved from Westfield, New Jersey to a house on 9th Street in Ship Bottom on Long Beach Island. A carpenter by trade, in 1958 August built The Viking Motel on four and a half acres of land on the boarder of Ship Bottom and Brant Beach. Named by August for his Norwegian ancestors, The Viking Motel is a well-remembered landmark on Long Beach Island.

August and Jenny’s son Henry, his wife Laura and their children David, Sharon, Darrel, and Sandy were frequent visitors to their grandparent’s motel on LBI. “In 1961, my parents, Uncle Patrick and Aunt Ruth Width took over The Viking Motel,” says David Width. “Later in the 1960s, my parents built a home on part of the property where the motel was located,” he says. “We lived there year-round for many years.”

David recalls his dad Henry, Laura’s brother Bob Burd, and son-in-law Bill Christopher were building an addition in the back of the motel when the 1962 storm hit. According to David, they refused to evacuate during the storm. “The plywood that was stacked on the roof blew into the bay,” he recalls. At the time of construction there were twenty-five units. “After the storm, Henry and Bill went out on the bay to recover as much of it as possible.” Construction after the storm, increased the number of rooms at The Viking Motel to forty-three. In addition, the motel now had amenities like air conditioning, color television and a new dining nook. 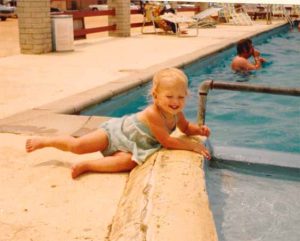 In 1963, The Viking Motel installed its locally iconic swimming pool and slide. “I remember carrying those heavy concrete blocks,” says David. “It was the biggest pool on LBI.” The pool was used in summer and winter. “Local kids used to ice skate on the frozen pool in the winter,” he says with a laugh.

Until the 1970s, The Viking Motel was open year-round providing accommodations for summer guests and offseason sportsmen. The average rate was $16.00 a night. Regular guests at the motel frequently reserved the same room for each stay. “Mr. Wolf always wanted room number 43, overlooking the bay,” recalls David. “He wouldn’t make a reservation unless it was available.”

Over the years, many local high school and college students found summer employment at The Viking Motel as housekeeping staff. Most returned to work at the motel each summer. As an incentive for staff to stay past Labor Day to help with the large crowds, the motel offered a generous temporary pay increase.

In 1985, The Viking Motel was sold, and subsequently torn down by the new owners. Serendipitously, in 2017 the property became the new location of Hutchison Fiberglass Pools and Spas, an exclusive dealership for Viking Pools. The new Viking connection brings a smile to David’s face as he says, “It’s a small world.”