Photography and text by Marvin Levitt

The summer after the Great Storm of 1962 that cut the island in half, I took my family down the shore. We always rented a large square house in Harvey Cedars from the Okurowski family.

The bay was quiet; the lisping splash of water against the dock was soothing. But the water beyond that was a ruin of garbage. The house sat atilt. Many houses were gone forever, taken by the ocean. 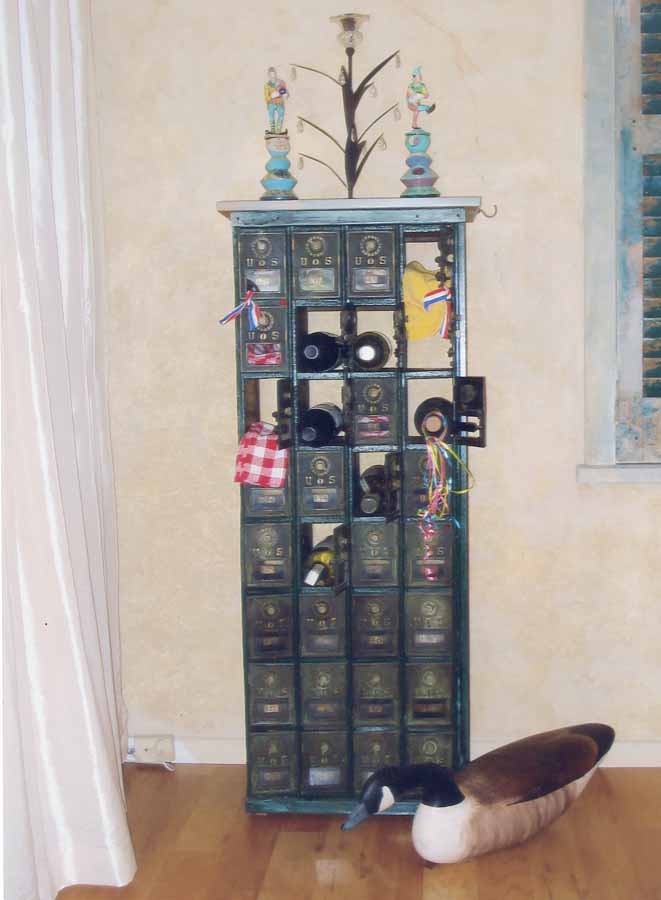 Jumping into the water to tie up my boat, my foot hit a concrete block and I stubbed my toe. I pulled the block from the water. I also pulled out part of a stove that had somehow been blown there during the storm. I observed detritus floating for as far as the eye could see.

Leon Okurowski and I planned to go fishing. But we had some serious work to do beforehand. We started pulling in flotsam and jetsam. Using our crab nets, we started on the smaller stuff; Coke cans, bottles, clothing, and such. Soon we were hauling in furniture, boards, batting, shingles, parts of houses; you name it, and it was in the bay sloshing past us.

Mr. Monk the postmaster wanted nothing to do with the old boxes, proclaiming them junk. A new post office was to be built now, along with a new municipal building.

Looking at the boxes, I admired the brass fronts and ornate construction. Being an artist with a serendipitous eye, I envisioned them as a unique item. I washed, polished, and waxed them back to beauty. When they were finished, I gave some away. One last row serves as the wine rack in my cottage by the bay. The post boxes are now a prized and beautiful piece of furniture. It stands as a relic of the past and reminds me of a bygone era on Long Beach Island.