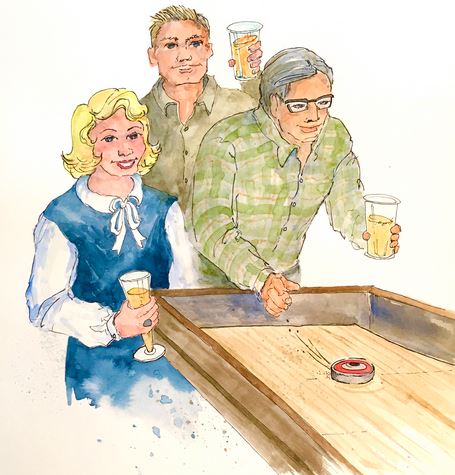 Artwork and story by Carol Freas

Year-round residents are often asked, “How can you stand the winter here? It’s so desolate! What do you do for fun?”

Sixty years ago to stave off the dismalness of winter, off-season folks on LBI and the mainland would see a movie at the Colony Theater in Beach Haven, with minimal heat, or, if they were fortunate enough to have a color TV with three channels, watch Ozzie & Harriet or Lawrence Welk on Saturday night. Otherwise, the biggest entertainment in winter occurred at local taprooms. These were gathering places to catch up on news, socialize, and to play a game more popular at the time then football. Table Shuffleboard.

Island bar keepers saw the market value for winter residents to play this friendly game and sponsored their own teams during the 1950s and 1960s. Among the hot spots for the game were Britz’s and the Moose Lodge in Beach Haven, The Sea Gull in Ship Bottom, Tompson’s in Manahawkin, Tower Tavern and Cidas in Barnegat, and Sabus in Tuckerton. Each establishment provided a free dinner buffet half way through the night during tournaments. Serious competition, along with Schmidt or Schaefer beer on tap, led to much laughter and ribbing. Practice was held throughout the week, possibly with a few side bets for upcoming tournaments.

Shuffle board is a challenging table-top game using accuracy and strategy with a deft touch to slide a weighted disk or puck along a smooth shuffleboard table. Tables can range in size from 9 to 22 feet in length, with regulation size for tournaments set at 22-feet. Alternate players standing together, take turns to knock the opponent’s puck into a gutter that surrounds the surface. The stroke is soft and measured, a slow controlled motion and steady follow through. To decrease friction, corn meal, with silicone beads added today, is sprinkled on the table. At each end, red scoring lines separated sections for points of one, two, or three, while a puck on the edge, a hanger, was four to win the frame at twenty-one points. Players recognized the value of the table insisting no bottoms, wet beer glasses, or fried flounder grease be allowed on the surface.

Historically called Knock Off or Shovel Groat, the game was originally played by English royalty in the 15thCentury and eventually, in English pubs where commoners slid a four Pence coin down the bar. During the American Revolution, the game traveled across the pond with British soldiers. Its popularity continued to grow over the years with regional variations. By 1941, the National Shuffleboard Association standardized table sizes and rules. Sweeping the country, this classic game of skill, not chance, offered diversion during the Great Depression and World War II. The height of popularity occurred during the 1950s with nationwide tournaments televised to excited local players here on LBI.

By 1970, its popularity dwindled since it did not attract a new generation of players. Today, dedicated older players across the country have revived the sport and are again passing along the social fun. Do you want to try your hand at shuffleboard? There are still shuffleboard tables at several bars here on LBI. Try your hand. Go knock off a few pucks.