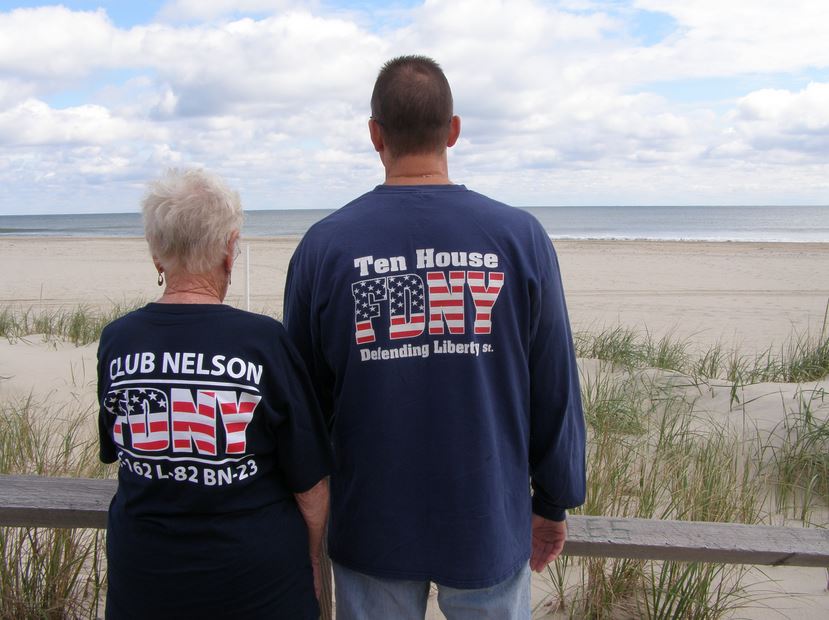 She restored my faith in people,” said Joe Healy about Betty Sullivan. In June of 2016, after returning home from a day on the beach at 68th Street in Brant Beach Joe realized he had lost his gold Maltese cross. It had been a gift from his sister Patty the first Christmas after he joined the New York City Fire Department. Emblematic of firefighters everywhere, the Maltese cross is a symbol of strength, protection, loyalty, courage, and sacrifice. Retired since 2006, Joe had worn the cross, engraved with his firefighter badge number, for more than twenty-one years. “We searched everywhere,” recalled Joe. “It was lost.”

In August of 2018, Joe’s wife Liz answered a phone call from Sergeant Michael Nash of the Ship Bottom Police Department. “He asked if anyone in the family had lost anything,” recalled Liz. “We just looked at each other and said no,” said Joe. He went on to explain how the fleeting thought of a lost beach badge brought to mind something he had lost more than two years ago. “The officer on the phone overheard me mentioned to Liz the gold Maltese cross and chain I had lost in Brant Beach,” said Joe. “We were shocked when he said they had it.”

At the Ship Bottom police station Joe and Liz learned that his cross had been found Betty Sullivan of Brant Beach while metal detecting in the 68th Street bay beach parking lot. Unable to successfully track the firefighter badge number, Betty brought the gold Maltese cross to the local police department. The badge number led them to Joe. “We were so surprised Betty had tried to find me,” Joe said with gratitude. “We wanted to meet her to thank her in person.”

Thinking back, Joe believes his Maltese cross may have fallen from the pocket of his beach chair in the bay beach parking lot. During the two years that Joe’s cross laid there, the parking lot was refurbished. Remarkably, it survived hidden under the new layer of gravel until it was unearthed by Betty.

After retiring from the New York City Fire Department, Joe and Liz relocated their family to Manahawkin. Sons Jack and Paul are involved in township municipal sports. Both are students at Southern Regional High School where Jack plays volley ball and Paul is a member of the marching band and jazz band.

Time is a gift promised to no one, as Joe knows only too well from his career as a firefighter. Having served his community for more than twenty-one years, Joe says he is grateful for every day spent with Liz and their sons. “I haven’t missed a single game or concert.”

THE GREATEST TREASURES FOUND ARE FRIENDSHIPS MADE

For more than thirty-five years Betty Sullivan of Ship Bottom, New Jersey has enjoyed the hobby and sport of metal detecting. She is a member of the Mid-Jersey Research & Recovery Metal Detecting Club and the South Jersey Metal Detecting Club. Periodically, clubs host treasure hunts in which participants search for silver coins or tokens that are hidden for the events. Often the hunts are a competitive team sport with prizes awarded. Betty has participated in hunts in Atlantic City, Virginia, and New Hampshire. Over the years, she has won seven metal detectors – earning her the nickname “Lucky” from her team mates.

Despite her nickname, not every outing produces treasures. “I went to Seaside after a nor’easter and didn’t find anything,” recounted Betty without a hint of disappointment. “Each time out is a wonderful experience. It’s fun and it is a passion I’ve enjoyed for decades.”

Although it can be hit or miss, thirty-five years of metal detecting has turned up a bounty of finds. Among the countless items Betty has unearthed over the years, a few of the more memorable include a hockey championship ring and a nurse’s ring. Frequently, on the off-chance an item she found was reported as lost, Betty contacts the local police department. 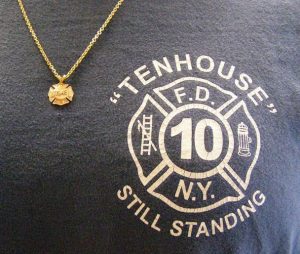 Some of the things Betty finds have been lost for years. But not always. Last summer while using her metal detector on the beach a young couple enlisted Betty’s help to find their lost car key fob. Using her metal detector in the area where their child had been playing, Betty soon found the key fob in the sand.

In addition to the thrill of finding treasure, Betty finds metal detecting to be personally gratifying. Recently, after contacting the Surf City police about a wedding band she found on the beach, Betty had the opportunity to meet the owner and his young son when they came to claim the ring. When Betty asked the little boy if he was happy she had found his daddy’s ring, he gushed. “My Mom is the happiest of us all.”

On a hot afternoon in June 2018, after a less than successful morning of metal detecting in Beach Haven, Betty decided to try her luck in Brant Beach at the 68th Street bay beach parking lot. Walking the parking lot with her metal detector, it wasn’t long before Betty heard that familiar signal. As she scraped away the new gravel that had been laid down when the parking lot was recently refurbished, “I got another signal,” recalled Betty. “I thought it was a piece of gold chain.” Further investigation revealed the gold chain was attached to a beautiful gold Maltese cross – a fireman’s shield pendant. Realizing the numbers engraved on the back of the pendant were most likely a fireman’s badge number, Betty telephoned her nephew Mike. She went on to explain, “Mike contacted his friend who is a firefighter. I hoped we would be able to track down the owner.” In the interim, Betty reported her find to the Ship Bottom Police Department. Twenty-four hours later the police department had good news for Betty. Using the badge number on the cross, they had found and notified the owner – firefighter Joe Healy. 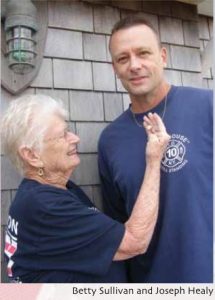 Joe Healy, a veteran of the New York City Fire Department, had lost his gold Maltese cross in August of 2016 after a day on the beach. He had served for twenty-one years as a firefighter. Now retired, Healy and his family live in Manahawkin, New Jersey. Somehow, his gold Maltese cross had survived for more than two years in the parking lot – it even withstood the refurbishing of the lot.

“Joe’s wife Liz called me,” said Betty. “She thanked me for finding his cross and for my honesty.” Eventually, Joe and Liz met with Betty to express their gratitude. Joe presented Betty with a New York Fire Department shirt.

The thrill of the hunt and finding treasure is only a part of what Betty loves about her hobby. For her, the human connection made when returning a treasure to its owner is priceless. According to Betty Sullivan, “The greatest treasures found are the friendships made.”