Gardening enthusiasts and commercial growers alike are re-discovering the value of choosing native plants over their more exotic and sometimes invasive counterparts from around the globe.

Indigenous plants have far-reaching roles throughout New Jersey’s ecosystem. The use of native plants in our landscapes and gardens supports local wildlife including threatened and endangered species that depend on them for food, shelter, and nesting sites. They help to stabilize the dunes and reduce erosion along our shorelines. They require less supplemental irrigation, are better adapted to our New Jersey climate and they attract important pollinators! Offered below are some selections that may pique your curiosity. 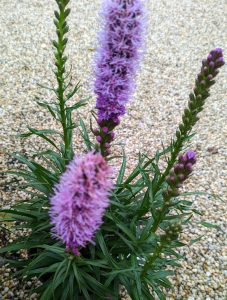 ‘Gayfeather’ or ‘Blazing Star’ (Liatris spicata) is an attractive perennial with showy stalks of fluffy purple flowers contrasting a lush, finely textured, grassy foliage. It is an outstanding alternative to purple loosestrife (a non-native species commonly found in LBI gardens) which is a serious invader of wetland areas.

All of the milkweed varieties listed below are valuable alternatives to Butterfly bush (Buddleia davidii) which is highly invasive in wooded areas and stream banks.

Swamp milkweed, Pink milkweed (Asclepias incarnata) is native to most of the United States and eastern Canada with the exception being west coast. It is a nice addition to a butterfly garden and is also attractive to many species of butterflies as a nectar plant. Swamp milkweed prefers moist soil, likes full sun, and typically flowers from June to September. It can spread through underground rhizomes but is easier to control in the garden than common milkweed (Asclepias syriaca), which is more appropriate for growing in the wild. 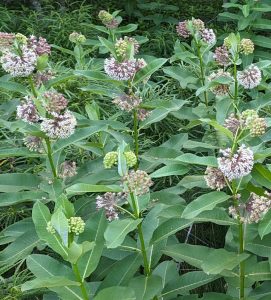 Butterfly milkweed (Asclepias tuberosa) also known as butterfly weed does well in dry soil and is self-seeding. The reddish-orange blossoms burst forth in May and lighten to a tangerine color as they mature in June. It is a favorite of hummingbirds, monarch and swallowtail butterflies, and bees.

Whorled milkweed (Asclepias verticillate) is native to most all of eastern North America is a good choice for dry areas. It reaches one to three feet in height and flowers June through September.

Spotted bee balm or horsemint, (Monarda punctata), a New Jersey native, is a good plant for barrier islands like LBI and coastal plains. It grows in dry soil, flowers June through July and has pagoda-like flowers.

Scarlet bee balm (Monarda didyama), an herbaceous perennial in the mint family, is native to coastal North America. It prefers moist, well-drained soils and full sun but will tolerate some shade. Bee Balm can reach a height of four feet and flowers June to August. Blossoms attract bees, hummingbirds, and butterflies.

New Jersey tea (Ceanothus americanus) is short woody native plant less than three feet tall. It is drought tolerant, has vigorous root growth and is good for erosion control. Another common name for this plant is wild snow ball because the flowers resemble those of the hydrangea family. 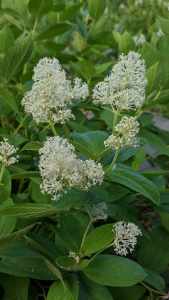 Winterberry (Ilex verticillata) is a deciduous (losing its leaves in autumn) holly which exhibits bright red berry-like fruits into the winter, providing a food source for local birds. As with most hollies, in order to produce berries, it is necessary to plant both a male and a female plant in close proximity to each other.

Inkberry holly (Ilex glabra) is a perennial evergreen shrub which can grow from six to twelve feet tall if left untrimmed. Both the flowers and berries are inconspicuous, but this plant is quite hardy especially in wet soils. It makes a good background border for the garden. 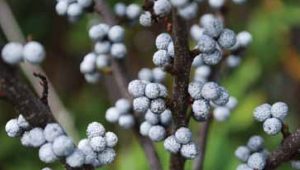 Bayberry (Myrica pensylvanica) is a deciduous round-shaped shrub with fragrant, dark green foliage. It is well adapted to growing at the New Jersey shore since it grows well in poor sandy soils and is able to tolerate salt spray. It grows up to eight feet tall, is deer resistant and is an excellent choice for hedges and screens. The small gray berries have a waxy coating used to make the familiar bayberry candle, which is scented by the crushed leaves. 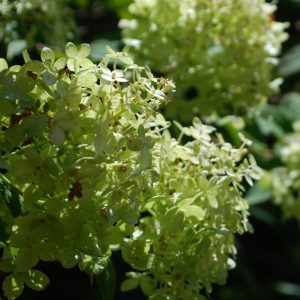 Wild or smooth hydrangea (Hydrangea arborescens) are showy, water-loving, long-flowering plants just like their cultivated cousins. The biggest difference is that the wild species has fertile flowers, which are more beneficial to pollinators than the sterile flowers of cultivars such as “Endless Summer”

Common ninebark (Physocarpus opulifolius) is a deciduous, wildlife-friendly shrub, five to eight feet tall, whose clusters of pinkish-white flowers and drooping red fruit offer food to many pollinators. It is especially suited to growing on barrier islands because of its drought tolerance and preference for poor sandy soils.