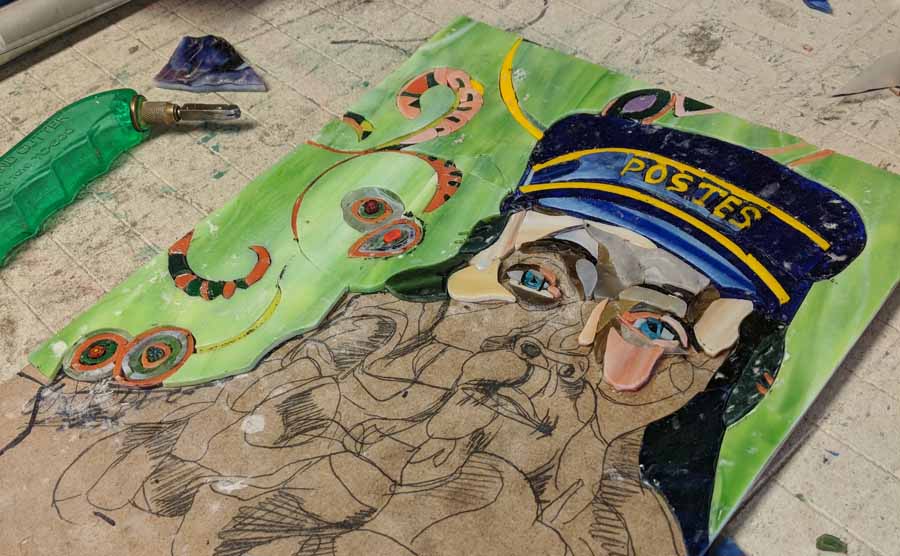 Photography and text by Susan Spicer-McGarry 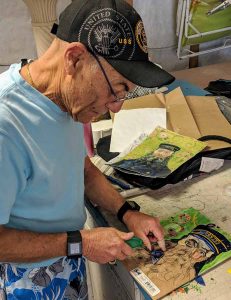 Bill Geller working on The Postman (shown above) in his Harvey cedars studio.

An elemental building block, silica is the main component in sand, it is found in traces in the human body and fundamental to life. “Glass is everywhere,” says retired attorney and glass artist Bill Geller. “It’s used for so many things.” Comparing it to the three phases of water, it is clear Geller is fascinated by the transformative nature of glass.

Though static in form, in Geller’s hands glass is imbued with fluidity, color, and a deceptive appearance of the ease of transformability. Using bold colors and vibrant tones in textural layers, Geller introduces geometric and abstract shapes producing portraits in glass, glassware, and sculpture with an element of humor and surprise. Geller’s work is performance art captured in glass.

“Crossing the LBI bridge was like crossing the Rubicon,” says Geller. Vacationing up and down the Island since 1986, Geller and his family found LBI friendly. “We love it. It is a great place to be.” Eventually they purchased a home in Harvey Cedars, expanded it and settled into summers on LBI between the ocean and the bay.

“My father was a Russian immigrant who lived the American dream,” says Geller. “He came here with two kopeks in his pocket and opened a butcher shop in East Orange, New Jersey on Main Street where my brother and I worked after school.” He describes Hillside, New Jersey as a working class one-square-mile town. “It was a great place,” says Geller. “Everyone knew each other.” 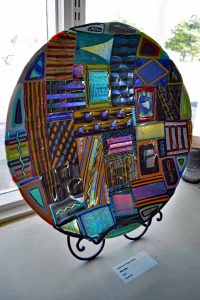 A graduate of Rutgers and the University of Maryland Law School, Geller describes himself as “retired for the most part. I don’t do any of the heavy lifting,” he says.

As a teenager, Geller enlisted in the Navy after graduating from high school. “It quickly became apparent that I wanted more out of life,” he explains. After completing his obligation, he applied to Rutgers. “I was not a stellar student and was not accepted,” admits Geller. “I requested an interview where I literally begged my way into college on my knees.” Having been told he did not meet the standards and rules for admission, in a moment foreshadowing a legal career Geller successfully posited, “Rules? Sir, you know there’s an exception to every rule. I am that exception.”

Geller’s adventure in glass began more than three decades ago with his accidental destruction of a newly purchased Victorian stained-glass window. Cautioned by his late wife Elinor to leave it alone, his efforts to improve the wooden frame were less than successful. “I broke a section of the glass,” says Geller. With an eye toward repairing the antique window, he enrolled in a stained-glass class. Seeking advice, he brought the broken window to class. “The instructor told me it wasn’t possible to fix broken glass,” he says. With that, Geller went on to create stained-glass windows and intricate stained-glass lamps.

Most handmade glass work falls into one of three categories or types of glass. Cold glass or cold worked glass involves any work done without heat, such as etching, cutting, and grinding. Warm glass is heated in a kiln to create slumped and fused glass. Hot glass work uses molten glass for blowing, sculpting, and casting. In a natural progression, Geller moved from cold worked glass to warm glass creating large-scale platters, bowls, and wall sculptures, eventually transitioning into hot glass.

Presently, Geller is creating portraits in cold glass. Using small pieces of glass instead of paint daubs he creates impressionistic pointillism-like work. Unlike mosaic, his glass portrait work uses no grout. Instead, the pieces of glass are cut by hand and carefully fit into place “shoulder to shoulder to obtain the desired shading effect,” explains Geller. The results are astonishing. 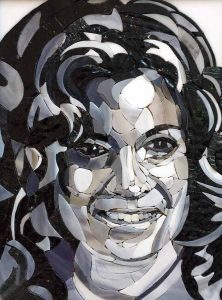 Geller’s black and white glass pointillism portrait of his late wife Elinor was well received at a recent exhibit at Delaware County College in Media, Pennsylvania. Currently he is working on a color portrait – his interpretation of Vincent van Gogh’s The Postman.

The transition phase of glass takes place in a heated kiln where it expands, contracts, and forms air bubbles. Geller’s slumped and fused creations require careful orchestration. Each piece of hand cut glass is meticulously positioned to allow air to escape as the heat of the kiln transforms the carefully laid pieces into unique works of art.

With no formal training as an artist, Geller is almost entirely self-taught and self-deprecating. “I’m not even sure I’m an artist,” he says laughing. “I’m always just making it up as I go along. The world is divided into engineer-types who first work out all the details before doing something; and trial and error guys who jump right in, figure it out as they go along and then take it to the next level,” explains Geller. “It’s a good thing I’m a fast learner.” 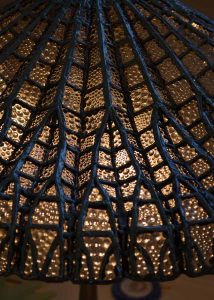 A visit to a hot glass studio in Mexico inspired Geller to expand his work into multi-media sculpture. Still in the planning phase, the piece presents numerous technical challenges. “I’m still working out the details,” he says. With a tone of excitement in his voice, Geller goes on to explain the project. “The major challenge will be creating one-inch thick tricycle tires from warm glass.” Once completed and combine with an authentic tricycle frame the pieces will become a multi-media sculpture.

An avid runner, Geller participates in the Harvey Cedars 5 Mile Dog Day Road Race. In celebration of a milestone birthday this year, Geller will run 26.6 miles through the five boroughs of New York City on the first Sunday in November in the New York Marathon. “I’m cranked-up to do it,” he says. “It’s a definite event. I’m training and doing a lot of running.” According to The New York Road Runners Club, last year of the fifty-thousand runners that participated – only thirteen ran in Geller’s category. “I hope to complete it before the lights come on.”

At his studios in North Brunswick New Jersey and Harvey Cedars Geller continually works to hone his craft. He finds inspiration in a juxtaposition of personal memories, great artists and occasionally found objects. Describing himself as deeply inquisitive,” Geller laughs and says, “I’m also constantly worried I’ll run out of ideas.”

Geller describes his life much like the glass he works with. “I have these transformative moments in life that I go with –– that redirect my life in ways that I never expected or anticipated, and always surprise.”