Many families have a long history with Long Beach Island. One such family is the Heiss family. In 1943, Warren and Gladys packed up their children and brought them to Beach Haven Crest for the month of July. For the Hess family coming to LBI immediately became their annual vacation.

The Heiss family rented the same house on 79th Street until the 1960s. Because the owners of the house were the White family, Warren’s family nicknamed their shore rental The White House. It was a gathering spot for friends and family and where church and choir members would sing and tell stories.As Warren got older, he traveled to LBI as often as possible.

Warren’s Uncle Russ loaned him his 1951 Ford for the summer. Warren and his friend Barclay had the freedom to cruise to LBI. Barclay’s parents owned The Tag A Long Hobby Shop.

Warren’s dad, Warren Sr., was an avid hunter and fisherman. He hunted all over the Pinelands and fished frequently on LBI. As a young boy, Warren recalls being awakened very early by his grandfather, Edward Esler, on cold January mornings to head out for a day of fishing.

The first stop was always breakfast at the Dockside Diner. They’d throw out their lines in Holgate. His grandfather was an impatient man and if there were no hits within five minutes, they were back in the car headed to Barnegat Light. Warren swears that his grandfather would speed down the boulevard at no less than 60 miles per hour in order not to miss the fish. They also had a tradition of annually renting Garvey boats. No matter the weather, they would go out and fish in the bay.

During WWII, at only seven years old, Warren got a job from town officials. He and a couple of friends were instructed to walk along the beach at night and alert homeowners to draw their shades and turn off their lights as U-Boats were spotted offshore. Early mornings, Warren could be found on the beach greeting the pound fisherman or watching the Menhaden boats offshore. 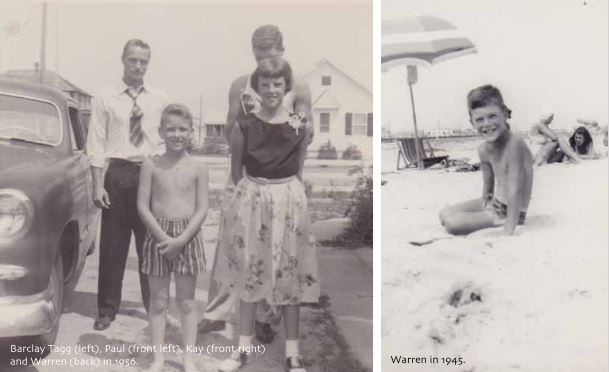 During the week Warren’s dad commuted back and forth to Philadelphia. On LBI without a car, the rest of the family shopped at the corner store for essentials and had milk delivered to the beach house by a local dairy. During that car-less time, Warren’s mom became Lutheran for a month instead of Methodist because the Lutheran Church was right down the road. When they had the family car, they could travel to the Kynett Methodist Church in Beach Haven to worship.

In 1957, Warren found his true love at the spring formal, Ann Stone, a student nurse. They married in 1959 and have been coming to LBI every year since. They used to go to the drive-in movies in Manahawkin and would roll up the windows to fight off the mosquitoes even though it was 80 degrees in the car!

Ann and Warren continued the tradition of August on LBI with their own family. From 1971 to 1994, they rented in Brant Beach on the ocean where friendships and memories were made that have lasted a lifetime. They were known for their happy hours. The partying started earlier and earlier and lasted longer and longer. People stopped in and were still there a week later. On many occasions, the beach patrols on their beach would party all night and were unable to show up for work the next day.

In 2001, Warren and Ann moved year round to Ocean Acres. With three grown children, Scott, Wendy, Donna and their families, their 70 years of LBI traditions continue.

It is with great sadness that I share the news that Ann Heiss has passed away. She and her husband Bud have ”Waves of Memories” here on LBI dating back to when they vacationed here with Bud’s family in the 1950s.

As a nurse, Ann Heiss was a wonderful, caring, and compassionate person. I was lucky enough to have her as my nursing instructor during my nursing school years from 1973 to 1976. We always shared our magical LBI connection. Each year, Ann, I, and my fellow classmates of 1976, held a reunion at a Surf City beach house. We loved seeing and spending time together on LBI.

RIP Ann. You will be missed. To Bud, and her family, I send my deepest condolences. You are all in my thoughts and prayers. Sincerely, Diane Stulga, Class of ‘76.