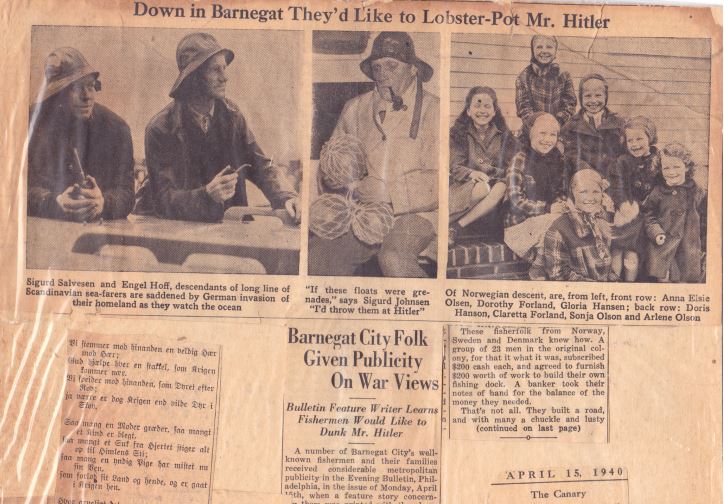 The Cause of the Norwegian Fisherman of Barnegat Light

Eighty-one years ago, Hitler’s Germany took the next step in its invasion of Europe and brought the reality of this far away war home for the Norwegian-Americans of Barnegat City, New Jersey, who together with their native brothers and sisters would answer the call of duty on both fronts of the war.

On April 9, 1940, German forces advanced north to Norway and its strategic fjordland ports that could be used as a vantage point to attack the United Kingdom more easily from across the North Sea. While some Norwegians were already allied with the workers parties in Germany and other countries across Europe that had been active for years, supposedly fighting to bring about national unity and rights for the working poor, the vast majority recognized the Nazi party and its domestic sympathizers in Vidkun Quisiling’s National Union party for what they were — fascist radicals.

Appeasement was accepted policy in Norway, which maintained neutrality with all sides. The National Union, though, was not in agreement with the tradition of pacifism emanating from Oslo. They wanted to join Germany and Italy in a new Europe. No sooner had Hitler’s army and navy attacked the county than Quisling launched a failed coup d’état that saw his party gain power a few years later in occupied Norway. Ahead of the invasion, which Germany publicly declared was for Norway’s protection from the United Kingdom, the country’s rightful leader, King Haakon VII, rejected Hitler’s demands to appoint Quisling prime minister of a new government lest his kingdom be destroyed. This led to a desperate months-long retreat ever northward for the unyielding king and government officials with help from the British Royal Navy while German bombers gave chase. Haakon was finally forced into exile in the United Kingdom in June. As the shock of the invasion unfolded, officials of the legitimate government of Norway took steps to follow in the footsteps of King Haakon, whose motto “All for Norway” would become a rallying cry throughout the struggle to retake the country.

One such official was Mathias Moe, head of the Royal Norwegian Consulate in Philadelphia. Like many, shock soon gave way to resolve. In a statement, he declared, “I am satisfied this crisis has come as a bewildering surprise to the Norwegian people. I am afraid they were unprepared. They have no great standing army. That is natural, because the country has been at peace with the world since 1841.” He ended with a portent of what was to come for the pacifist nation. “The Norwegians are a race of magnificent courage.” The courage he described would soon define the Norwegian fight against Nazi Germany, which had already begun in Barnegat City a world away.

That summer, the Philadelphia Evening Bulletin reported on the talk among Barnegat City’s sizable Norwegian fishing population, and it was as salty as could be expected. Nearly all had been born and raised in Norway, some wanted to stick Hitler in a lobster pot and sink it in Barnegat Bay. Sig Johnsen had more explosive ideas. Holding a couple of glass fishing net floats while speaking to the reporter, Sig told him, “If these floats were grenades, I’d throw them at Hitler.” This sentiment turned into activism and fundraising. Norwegian relief organizations were formed across the country in the wake of King Haakon’s flight. In Ocean County, the Long Beach Island Aid Norway Committee organized Island-wide community events to raise awareness. Members and leaders included a who’s who of Island governance and Scandinavian heritage: Howard Shifler, Lester Hoft, Jack Lamping, Rev. Ragnar Kjeldahl, Mrs. Adolph Jensen, Joseph Sen, Mrs. Edward Sprague, Lena Schrayshuen, Peder Nordstrand, A. H. Mowry, Mrs. Christine Benestad, Axel Jacobsen, Niels Ecklund, Hans Olsen, Fred and Karl Held, and Tonnes Bohen.

When the traditional summer open-house day approached in August 1940, it offered another opportunity for the exiled Norwegian government to rally support. The formerly saddened consul Moe was by this time leading the charge before concerned Americans in the region. At the Barnegat City firehouse that August a dinner, Norwegian dances, raffles, and a speech by Moe before hundreds from up and down Barnegat Bay was planned. Throughout the day, fishermen’s daughters went door to door asking for support and handing out “I have aided Norway” buttons. 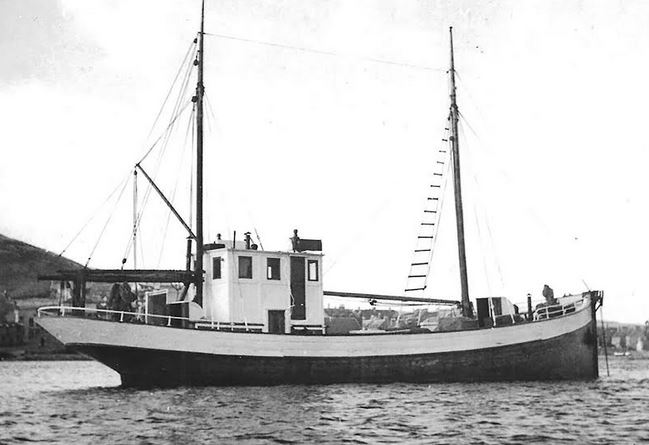 A Hardanger cutter, one of many used by the Norwegian Naval Independent Unit, nicknamed the Shetland Bus, from 1941-1945.

Money in a donation jar and festivities were only the beginning of the courage the Norwegian fishermen of Barnegat City and the home country would show. In the wake of the invasion, the hardiest fishermen in Norway fell in with the British Royal Navy and intelligence service to begin what would become known as the Shetland Bus. Over the next five years Norway’s fishermen volunteered their boats and their skills at the helm to evacuate refugees and government officials and covertly transport military supplies, secret agents, and intelligence in and out of occupied Norway from the Shetland Islands north of Scotland, 200 miles across the North Sea.

On the other side of the Atlantic, those fishermen’s Norwegian brethren sailing in and out of Barnegat Inlet would be no less heroic. When the United State was finally dragged into the war by the Japanese attack on Pearl Harbor in December 1941, the horror of war came to American shores, though it was downplayed through the U.S. War Department’s strict control of media. From January to June 1942, German U-boats savaged American merchant ships along the East Coast. One of the epicenters of activity and the site of the most visible attacks were the waters off Barnegat City.

Four tankers were torpedoed, two within sight of shore. The Norwegian fishermen at the docks on 6th and 18th Streets, along with their fellow fishermen of all stripes and the U.S. Coast Guard, did not hesitate to rush headlong into an active battle zone as the U-boats stalked the broken tankers burning on the water, sometimes firing on the would-be rescuers.

After years of bloodshed and oppression, Norway was retaken in the spring of 1945. On June 7, nearly five years to the day he was forced to flee, King Haakon returned and re-established the exiled government. In a post-liberation speech Haakon consoled his traumatized nation and scattered people, calling on Norwegians to begin the arduous work that lay ahead. “Today we all have the same feelings. Let us keep that unity that gave us victory. And let us, in this moment, remember those who paid the ultimate price in the struggle for Norway. Let us gather in the promise — All for Norway!”

That struggle in the face of tyranny and evil, which claimed more than 10,000 Norwegian lives, began with a defiant king, a courageous people, and grassroots events like those in the Barnegat City firehouse one warm August day long ago.