How do you turn back the tide? That was the question asked by the people of Barnegat Light, Ocean County freeholders, state legislators in Trenton, New Jersey’s representatives and senators in Congress, and the Army Corps of Engineers as World War II loomed on the horizon in the late 1930s. Barnegat City, as the town was called until 1948, had long known the power of the Atlantic and watched its ceaseless but slow march upon the precious sands that were its literal foundation with resigned fear. The culmination of Tuckers Island’s erosion into the sea in the late 1920s and early 1930s , an entire town filled with hotels, cottages, and a lighthouse, was still present in the minds of Islanders considering Barnegat City’s peril. Was Barnegat City destined for the same fate? 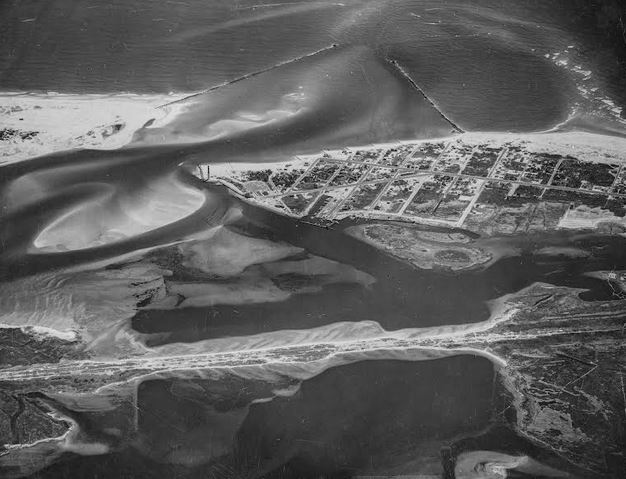 In the preceding twenty years, the failed planned city developed by Camden investors in the 1800s saw its remnants erased from the face of the earth. The giant Oceanic Hotel was forced into demolition when the ocean ate away right to its foundation. The grand keepers house was similarly torn apart for scrap before the waves could claim it. The favored hunters haunt, the Sunset Hotel, was a burnt ruin that was soon after covered by an equally erosive Barnegat Bay. Three streets, from East 3rd to East 5th, and most of their cottages were wiped off the map never to return. A bustling port that was also home to fishermen and their families for generations became part of the inlet channel and in part forced the construction of today’s docks at 18th Street. Barnegat Lighthouse, though saved from imminent collapse in the late 1920s, still faced constant threat from surging waters on three sides. At one point in the 1930s, Barnegat lighthouse was nearly made an island because of its precarious place on a now worn-down sandy point where the tidal flushing was at its most powerful. Slowly but surely, Barnegat City was being scoured away four times a day as the infamous inlet moved millions upon millions of gallons of water around the town’s shorelines from West 6th Street all the way to East 8th Street.

Something had to be done that would withstand the power of these life-giving and life-taking waters. That something, though, also had to make use of the natural forces at work if it hoped to be a lasting solution.
The Army Corps of Engineers assumed responsibility for this epic conundrum. Their engineers came up with a radical plan. They would install rock jetties, as state and local officials had been begging for years. But they would go much further than normal short jetties placed strategically on the beaches to catch sand and build up land.

In late 1938, the Army Corps arrived at Barnegat City. Over the next two years, they would erect gigantic metal towers on both sides of the inlet that rivaled the lighthouse. Powerful engines at the feet of these towers operated wires and pullies between them. Using this system, massive boulders trucked up to Barnegat City would be lifted and ferried across on the wires and deposited on the southern tip of Island Beach. The boulders mined at Trap Rock quarries in New Jersey would be met on the other side by a train-mounted crane operating on a long temporary wooden pier that would allow the construction of a 4,200-foot jetty at a cost of $300,000 to stabilize the north side of Barnegat Inlet. This high-wire act was necessary due to the absence of paved roads down Island Beach to the inlet and the lack of a deep-water approach to the shore there that would allow offloading by barge. On the south side of the inlet, a matching jetty would be constructed at an angle from the beach at East 8th Street out to a new 1,000-foot mouth that was intended to guard the inlet channel from further movement or disruption when combined with regular dredging in the future. 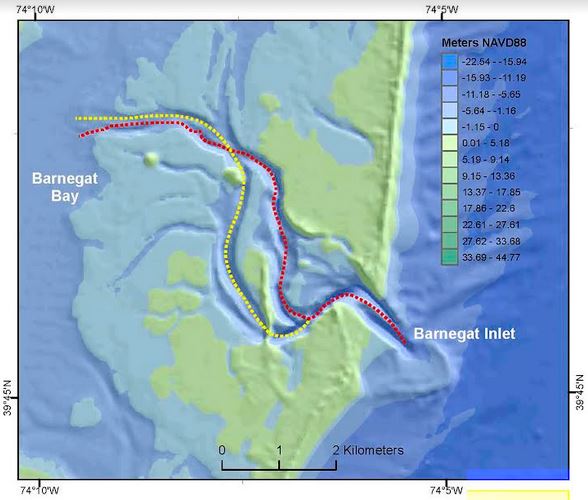 The jetties, however, dealt with only half of the problem facing beleaguered Barnegat City. The same channel they would manage in the future also had to be re-routed.

In 1943, the Army Corps of Engineers accepted a $130,000 bid from Eastern Engineering of Atlantic City for the second phase of this two-pronged counterattack against the destructive tides.

The Army’s plan was to block the historic channel that snaked its way south behind Barnegat City then turned west, passing between Sunset shoal and High Bar shoal out in the bay. Eastern Engineering moved thousands of tons of sand so that out of the bay rose a nearly two-mile dike closing the gap between Sunset and High Bar shoals. A smaller dike was also built between High Bar shoal and the Island at West 20th Street, cutting off any path for a southern channel behind Barnegat City. The company also dredged a new 19-foot channel from the Inlet that turned northwest after it passed the lighthouse instead of the old turn further south.

Taken together, the effect of the jetties and the dike were to force the awesome flushing power of the bay and ocean through Barnegat Inlet away from the town’s fragile and threatened shorelines. It also helped to increase the natural safeguard regulating flooding that inlets provide which in Barnegat Bay’s case was compromised by its unique geography, leading to less emptying than expected. Because of this, Barnegat City suffered chronic flooding and increased erosion thanks to the regularly higher water table.

This mammoth effort would prove not to be the end of the threat to Barnegat City, but it was a giant leap to the beginning of the end. In the years to come, further jetty and groin construction, along with the eventual re-alignment of the south jetty in the late 1980s, would prove necessary before the tides were truly tamed at Barnegat Inlet.

During especially high tides or storms, water would build up in the now closed mini-bay between Barnegat Light and the dike to the east, causing flooding along the bay from West 6th down to West 20th streets. The oceanfront streets north of East 8th remained under threat as the close shoreline of 1938-39 was effectively fixed in place by the construction of the south jetty, leading to dangerous flooding whenever there was a storm. The outer ends of the jetties, submerged at high tide, would be the cause of a spate of complaints from boaters fearful of striking the deadly rocks just under the surface and those boaters who would strike them, putting life and limb in jeopardy.

During the war, the south jetty at high tide caught its share of Navy vessels, helping to expedite later fixes. And over the decades, the channel would wind inside the mouth of the inlet southwest near the beaches from East 6th Street all the way up to the lighthouse, at times making for risky swimming by bathers and nervous sailing by captains passing so close to shore. 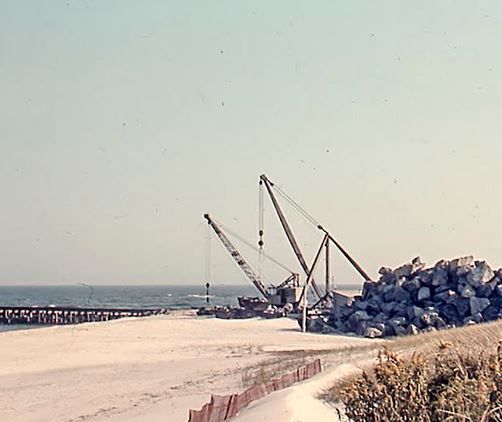 If not for the $1,000,000 Barnegat Inlet improvement project between 1938 and 1943, the Barnegat Light of today might look shockingly different, and smaller.

As often as history records, the prolonged loss of Barnegat City’s landmarks and the very ground on which it stood was due to bureaucracy, inaction, infighting, and political squabbling between the town, Trenton, and Washington, D.C., sooner or later when the little town first sighted by Henry Hudson in 1609 needed it the most, the stars would align and action would be taken to save the day, albeit usually at the last possible minute. And so, it was. In 1938, after twenty years of desperate appeals and half-measures, at long last, the battle at Barnegat City was joined with the full force of American ingenuity when mankind found a way to turn back the tide and save a town.