“Bloody John” Bacon and William Franklin made for strange bedfellows during America’s Revolutionary War. One man was the royal governor of New Jersey and son of a Founding Father; the other, a Pine Barrens malcontent who roamed the nearby woods and beaches pursuing a reckless, violent life of crime. But how did such a pair join forces? What common goals could these two men have possibly shared? If you lived on Long Beach Island during the last half of the 18th century, on any given day you might look out past the breakers and set your sights on the comings and goings of pirates. In stolen sloops and schooners, purloined brigantines and barques, desperate men of questionable character cruised the coast picarooning those merchant ships often less well-armed. Some of these sea dogs were locals, others from distant ports-of-call; all keen it seems on criminality, chasing down their prey for its treasured booty, often at the business end of a flashing sword or cannon ball. 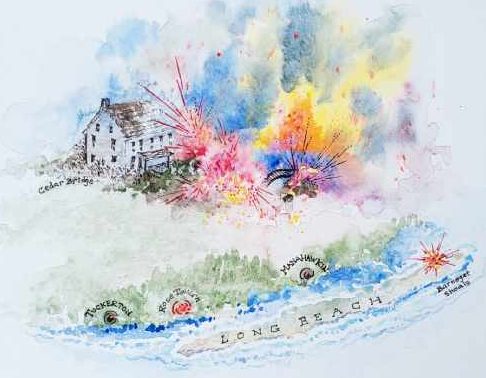 “Bloody John” Bacon, Pine Barrens born and bred, living at various times in Manahawkin or Pemberton, was one such villain as adept at mischief on land as at sea. Treachery was his calling card — murder his middle name. With a ragtag crew of Piney misfits, his reputation for terror and mayhem only grew in those years which spanned the Revolutionary War.

Up in Perth Amboy, then New Jersey’s capital, political life was hardly less exciting for William Franklin, the son of Benjamin Franklin, who had served with distinction as royal governor for more than a decade. His British masters in Parliament, sensing the Colony’s itch for independence, were nervous, and Franklin would soon need to decide — Patriot or Loyalist — which would be his side. Remain loyal to the Crown which paid his way, providing a royal lifestyle? Or switch his allegiance to the thirteen upstart Colonies whose very survival was hardly assured.

By January 1776, as the drumbeat for independence grew, Franklin’s choice was made. Arrested and charged with supporting the Loyalist cause, he was held for two years in a Connecticut jail. But upon his release — unrepentant and unbowed — he doubled down in support of the British Crown and formed The Board of Associated Loyalists. Sanctioned by King Charles “to annoy the sea-coasts of the revolted Provinces to disrupt their trade,” he recruited a band of guerrillas to harass American Patriots on New Jersey’s southern shore. At the top of Franklin’s wish list to lead such a force was “Bloody John” Bacon, who, with his Pine Robber Refugees, roamed the woods from Tuckerton to Toms River. Taking full advantage of his newly minted Captain status, Bacon not only fulfilled Franklin’s wishes but exceeded them, plundering with impunity Patriots and Loyalists alike.

Bacon, you see, was a man without a country, loyal to neither side, who used the war as a cover for his crimes, as raids in 1781 on innocents in Waretown and Soper’s Point do prove. But it would not be until the following year that “Bloody John” made his blackest mark, a stain so great he lives in infamy today, as the instigator of The Massacre at Long Beach.

On the afternoon of October 25, 1782, Bacon and his men got wind that a Dutch cutter, with a valuable shipment of tea, had run aground on Barnegat’s shoals. The wind was cold and the seas were high, his informer told him, and the local militiamen who were off-loading the vessel would need to suspend their work at nightfall and seek shelter in the dunes; the perfect time to strike.

Sailing from the mainland in his whale boat, Hero’s Revenge, Bacon and nine others beached their craft on the bay side of the Island and approached the camp at first-light. Silently drawing their knives, they fell upon the men, murdering many as they slept. The cries of the others were heard aboard a nearby vessel, Alligator, riding at anchor just offshore. But by the time help arrived it was too late — all twenty-five men were slain or wounded. The Patriot leader, Captain Andrew Steelman, was among the dead.

When word of the slaughter reached Governor William Livingston, a bounty of 50 pounds was placed on Bacon’s head, quickening the urgency for his capture. But still the desperate outlaw slipped into the pines with more havoc left in him. For William Franklin, things were not much better. Fearing that the war was lost, Loyalist volunteers, once eager to sacrifice life and limb, were having second thoughts. Bacon must have known this too, for in late December 1782, with Britain’s defeat assured and Burlington County’s Mansfield Militia in hot pursuit, his camp near Cedar Bridge Tavern was overrun — most of his band captured or killed — in what has come to be known as “the final skirmish of the Revolutionary War.”

Yet “Bloody John,” alone now and wounded, eluded his captors once more, and several months would pass before he was tracked down to face the bayonet and ball inside a West Creek tavern. His lifeless body was brought to Arneytown, Burlington County, and buried in an unmarked grave.

The end of the road had come for Franklin as well. Forced to flee, he sailed posthaste for London. Estranged from his famous father and left out of old Ben’s will when he died in 1790, William lived his last twenty-four years in English exile.

And so concludes the story of the pirate and the printer’s son. One man, with two countries, who had to choose which one he’d lose; the other man, without a single one, whose life was bent and broken.