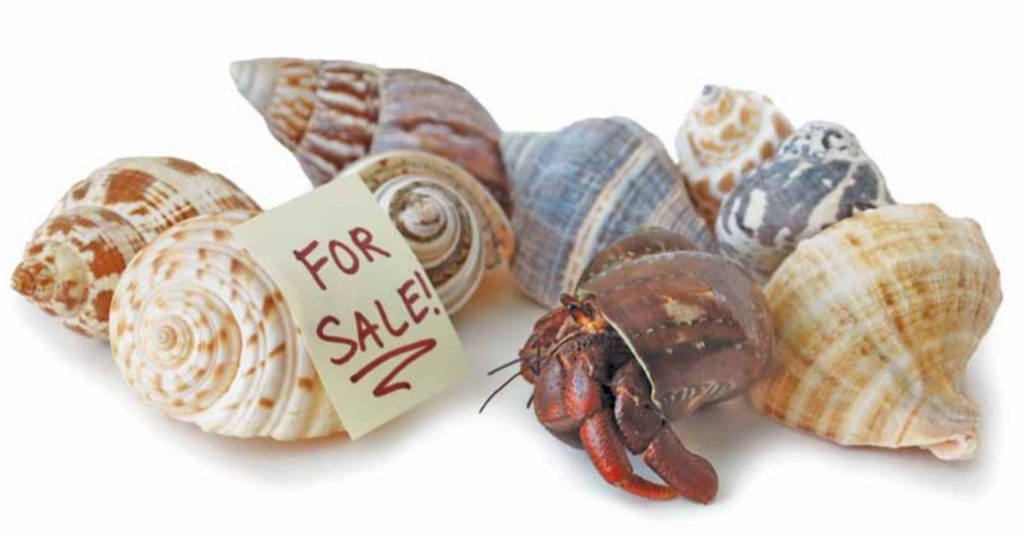 For years, hermit crabs have been the first pets for many beachgoers. They can be a wonderful way to teach a child how to properly care for small animals. Unfortunately, when it comes to choosing a new friend, many judge a hermit crab not by temperament and health, but by the look of its shell. Often this means choosing a hermit crab with a colorful painted shell, or one with a famous character or favorite sports team emblem on it. However, painted shells are dangerous, not only to the crab, but potentially your child.

Purple pinchers (Coenobita clypeatus) are the most common species of hermit crabs sold in stores due to their hardiness and ease of adaptability. Hermit crabs can live up to forty years in captivity. Like any other pet, a hermit crab should be seen as a member of your family and not as a souvenir. And just like other pets, it is important to understand the care a hermit crab needs to live a long and healthy life. That care starts with selecting a hermit crab with a natural, unpainted shell.

While they may look pretty, painted shells can be deadly to hermits. Though not connected to their bodies, the shell is an important part of the crab’s biology. Paint contains chemicals which overtime, can seep into their food and water supply because hermit crabs like to sit in their food and water dishes. Additionally, hermit crabs store water in their shell, which they pass over their gills to breathe. Often wet paint gets inside the shell and does not dry before the crab moves in. As the paint dries, the crab becomes stuck and cannot exit the shell where it slowly dies from starvation or suffocation. Natural shells also help regulate the crab’s body temperature. Anything on the shell’s surface may prevent this process leading to stress and ultimately death. Besides the dangers to hermit crabs, painted shells can be hazardous to children.

Many painted shells originate from the Pacific fishing trade and are sold wholesale from overseas. The paint used is unregulated and may contain lead, a well-known hazard. Lead was banned for use in house paint and children’s products in the United States in 1978; however, it is still widely used in other countries. Children may be exposed to lead from shells coated with lead paint.

It is important to pick a hermit crab based on temperament and health instead of its shell. Look for one with a calm nature. A hermit crab that is climbing and active is good, but hyperactivity or skittishness might be a sign of stress. If the hermit crab looks lethargic or has the smell of an old boot, it may be ill.

Hermit crabs usually change shells once a year after a molt when they grow. Sometimes they’ll change if their shell is damaged. When choosing shells for your new friend, choose natural ones with wide, circular openings, such as turban and moon shells. Be sure the new shells have an opening slightly larger than the one the crab currently occupies. Place a few shells in the crab’s habitat around the full moon, especially after a molt. They’re more likely to do it at night when they feel safe, so give them some privacy. It’s important to remember animals do what they want, and we must be patient.

Natural shells are beautiful, healthy home for your hermit crabs, and there are so many to choose from. Your new friends will thank you, even if they can’t say it.

Remember, hermit crabs are living creatures and should never be treated as toys or summer souvenirs.