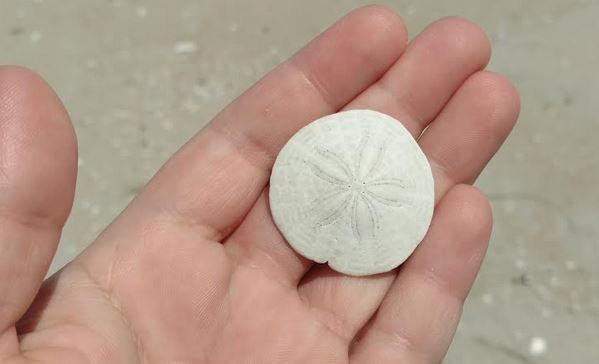 Many of us have searched the beaches since childhood for treasures hidden in the sand. Shells, sea glass, and driftwood are among the favorites sought by beachcombers. One rare find that always captivates seekers – young and old – is the sand dollar. Beautiful gifts from the sea that enchant and fascinate, sand dollars can become the highlight of a beach hunt and a valued part of any collection. Delicate as they are, these simple sea creatures have quite a long legacy to share.

Commonly called sand dollars because of their resemblance to silver coins used in the past, they are also known as pansy shells for the flower-like star pattern on their upper surface. Sand dollars are technically a flatter form of sea urchin of the order Clypeasteroida. An ancient animal, the first true sand dollars first appeared 66-56 million years ago during the Paleocene and are currently found worldwide. Their flat structure enables them to burrow into the sand to escape predators. Living sand dollars are usually a deep purple or pink in color and covered in fur-like cilia. Spines on their underside allow them to travel across the sea floor in search of plankton, crustacean larvae, algae, and detritus.

Like sea stars, this food is forced to the mouth located at the center of the sand dollar’s star-like grooved underside via tube feet called podia. The mouth apparatus, also known as Aristotle’s lantern, consists of tiny teeth-like structures arranged in a star-shaped section designed for grinding prey. When the dried endoskeleton of a dead sand dollar is broken open the tiny structures, resembling angels or butterflies, fall out.

After a sand dollar dies, the cilia covering decomposes, and its pale gray endoskeleton is all that remains. This is when it should be collected from the beach. Most sand dollars are not bright white unless bleached artificially or by the sun. After death, the endoskeleton can absorb the color of the mud or sand in which it is buried. Because of this, gray, brown, and even dark black endoskeletons are possible. If you find one sand dollar you will likely find more in the same area because they live in large colonies. Sometimes more than 600 individuals live in one square yard. As they live, grow, and die, sand dollars stack up on one another creating layers in the sea bed.

Like growth rings on a tree stump, the age of a sand dollar can be determined by counting the rings on the endoskeleton. The growth plates extend outwards as the animal ages, which can be seen in the form or dark spots on the top of the shell surrounding the petal-like pores. A sand dollar can live up to ten years.

Prior to the beach replenishment after Superstorm Sandy, sand dollars where rarely found on Long Beach Island. Today, sand dollars are emerging from the dredged-up sand and clay as it erodes back into the ocean. The sand dollars of LBI tend to be fragile as they have been buried on the ocean floor for many years. As a result, the center often breaks, so finding a whole sand dollar is a real treasure. But no matter where they are found, sand dollars are always a beachcomber’s delight.