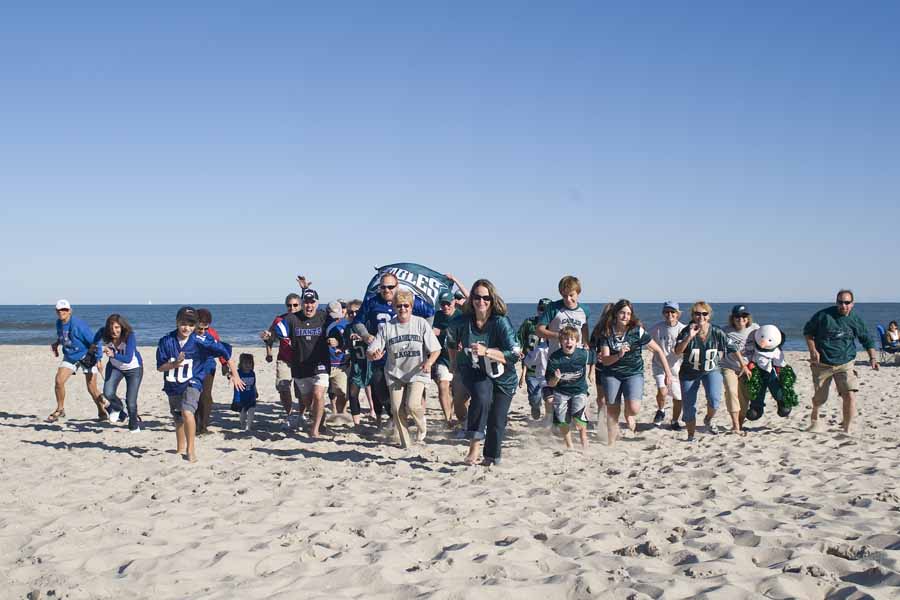 Eagles or Giants? New York or Philly? Long Beach Island is divided right down the middle on that one. Like a proverbial line drawn in the sand, and one as concrete as the Boulevard, LBI splits the fans of these storied football franchises in two.

On any given Sunday, green and blue jerseys battle it out in local bars, in living rooms and on decks all over the Island. Friends and family argue over quarterbacks, third and longs, instant replays and playoff chances. Football on the Island is the modern-day war between the states. The North has two teams in the fight, Jets and Giants, while the South boasts only the Eagles. 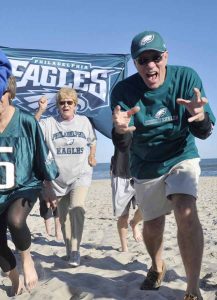 A Sunday afternoon at the Elks, Moose, Nardi’s, Tuckers Tavern, The Gateway, and every other sports gathering spot in the area resounds with “J-E-T-S Jets, Jets, Jets” or “E-A-G-L-E-S EAGLES!” Giants fans usually just point to their finger, football jive for “We have a Superbowl Ring, ‘nuff said.” Like the Capulets and Montagues or the Hatfields and McCoys, the final battleground for fans of these two cities seems to be LBI.

During summer, as the population swells, and you can occasionally spot a Cowboys or Redskins jersey on the Island. For the most part, though, it’s green or blue, with a vengeance. Can friends and family survive the divide? It can be done, but it is a delicate balance.

A few simple rules should get you though the season with your relationships intact. First, never gloat (easier said then done). Second, extend sympathy when the other team really tanks (even if you’re faking it). Third, do not call or speak to the losing team fan for two days after a defeat, they need time to mourn, and your joy will probably be hard to conceal. Last, and most importantly, if their team scores, smile and buy your rival a drink, but order yourself a double. It’ll help you cope. These few simple rules should get us all through the season still speaking with each other. Or not!

ARE YOU READY FOR SOME FOOTBALL? I know I am!