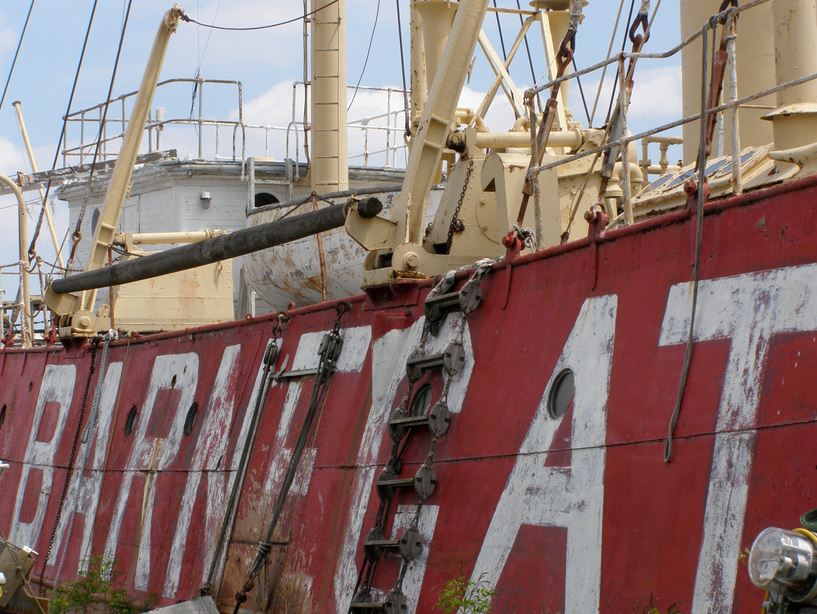 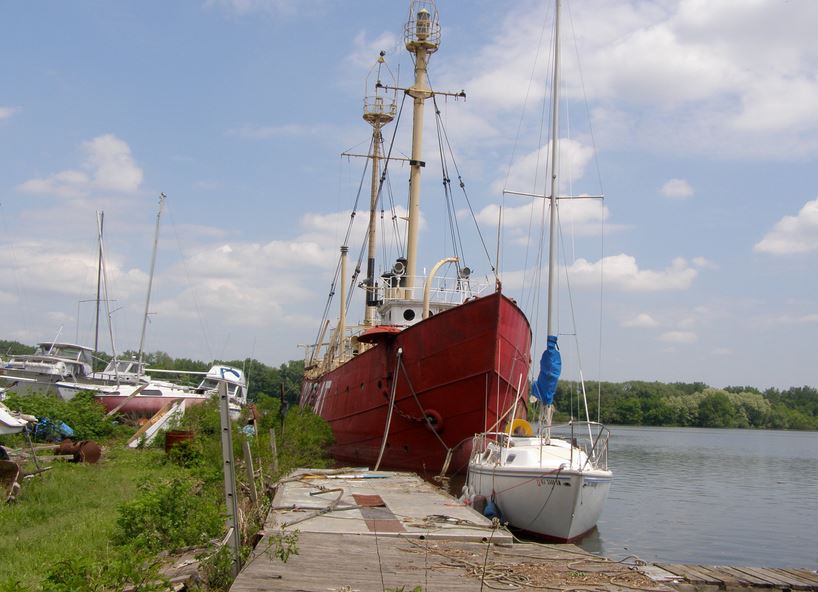 Of the few lightships in existence, the Lightship Barnegat is one of the oldest. It is the last of its kind, embodying the steel-hulled lightship history of Long Beach Island.

Lightships and their crews are the unsung heroes of the coastal sea. Tasked with warning other vessels of impending hazards, they rode at anchor through hurricanes and perilous conditions when all other ships sought safety. Considered the most dangerous of assignments, many lightship sailors lost their lives while protecting the lives of others.

From 1820 to 1952 a total of one hundred seventy-nine lightships were built for the United States. Used as floating lighthouses in areas where the shoreline was not suitable for conventional lighthouses or where shifting shoals and sand-bars presented ever-changing hazards, lightships deployed steam-chime whistles or foghorns, and flashing lights from atop their masts to warn ships away from danger. Easily recognizable from afar, the name of each lightship was painted in large white letters upon its bright red hull. By 1909 fifty-one lightships were stationed along the U.S. coast.

In 1835, to mark Barnegat Inlet, a forty-foot-tall conventional lighthouse was constructed at the northern tip of Long Beach Island. By 1857 it fell into the sea and a temporary light took its place until a new lighthouse – Old Barney – was erected in 1858. Despite the use of the new Fresnel lens, due to New Jersey’s unique coast, mariners still found the new lighthouse to be insufficient. Destructive storms and erosion eventually caused the lighthouse to be turned over to the state of New Jersey and decommissioned. In its place an offshore lightship was established in 1927. Vessels along the New Jersey coast would be guided by Light Vessel 79 – the Lightship Barnegat. 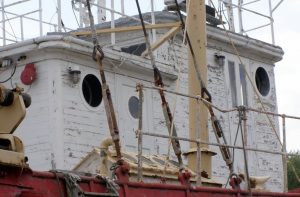 The Lightship Barnegat LV/79, was built by the New York Shipbuilding Company in Camden, New Jersey in 1904. The steel-hulled, 688-ton, steam propelled 130-foot Lightship Barnegat was designed with two masts displaying a total of six oil-fueled lanterns, a steam-chime whistle that sounded every twenty seconds, a submarine bell, and later a radio beacon. Assigned to the newly created Barnegat Station, her role was to warn ships of the hazards presented along the infamous coast of New Jersey.

Hailed by the “Lighthouse Service Bulletin” as “the most important new aid to navigation provided in many years on the Atlantic coast of the United States”, the newly established Lightship Barnegat would serve in one of the most important navigation stations. The Bulletin further stressed the need for a lightship:

“…there is no sound fog signal along the entire coast of New Jersey, over 100 miles, between the entrances to New York Bay and Delaware Bay, and it is not practicable to place such a signal at a shore lighthouse because the track of vessels is too far offshore. Second, this location off Barnegat is of critical importance to shipping because of the change of course necessary here for all coastwise shipping, and because at this point traffic con-verges from Delaware and Chesapeake Bays, from Cape Hatteras and the South Atlantic coast and Panama, from New York entrance, and from New England. Third, because of the immense marine traffic along this coast and the fact that it is a low-lying shore, fringed with shallow water, compelling deep-draft ves-sels to keep well off; 50 strandings were recorded in this vicinity between 1903 and 1923.”

From 1904 to 1924 the Lightship Barnegat was posted at Five Fathom Bank on the coast of New Jersey near Cape May Lighthouse. For two years, it was used as a relief lightship before being permanently posted to Barnegat Station where it remained until 1942. At the close of World War II, it served temporarily as an examination vessel by intercepting and inspecting all ships seeking entry into the Delaware River. After the war, the Lightship Barnegat was returned to Barnegat Station where she served until decommissioning in 1967. 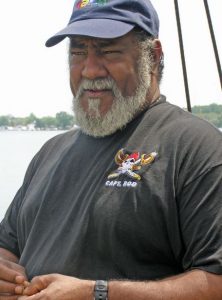 Sadler, a former teacher and beloved community activist, sought to restore the Lightship Barnegat and move her to the Camden waterfront as part of a revitalization project. But his vision, fierce dedication and hard work could not overcome the ensuing economic downturn. Despite Sadler’s monumental efforts the project lacked the necessary resources to go forward. With the fate of the Lightship Barnegat still undetermined, Rodney Sadler passed away on March 20, 2019.

Though without restoration – docked at Pyne Poynt for decades – Sadler protected the historic Lightship Barnegat from artifact seekers, vandals, and those who would sell her for scrap. She is, for the most part, intact. But not even Sadler could protect her from the ravages of time. Decades have passed; time and rust are masters of their craft.

The future of the Lightship Barnegat is unknown. Today, docked in the tidal waters of Pyne Poynt she awaits a new advocate to champion her cause. For without an advocate, the historic Lightship Barnegat will be lost, and an important part of Long Beach Island’s maritime history will disappear forever.

Like most lightships, the Barnegat is easily recognizable from afar by its name, though her paint is peeling the large white letters are still visible on her red hull.

If you know anyone on this list or if you, or anyone you know served on the Lightship Barnegat, please contact Cheryl Kirby at echoesofLBI@gmail.com