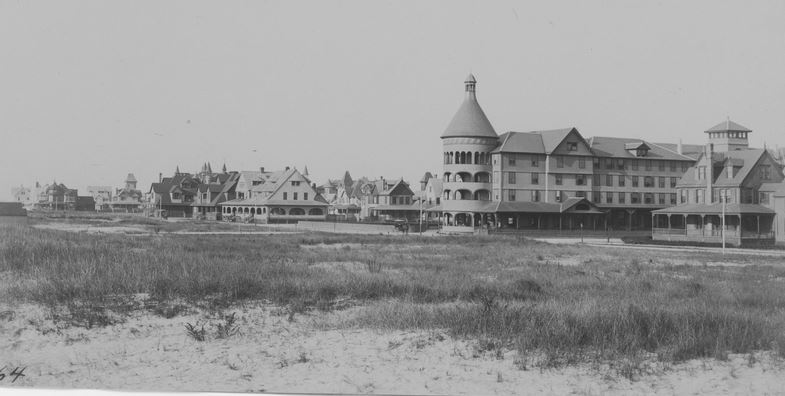 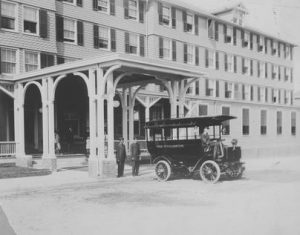 Autocar bus would meet guests at the wharf.

It is not often today that a father finds his son in Europe and orders him home to take over the family business. Yet that is exactly what Robert Barclay Engle did when he became ill a few years after building the large and luxurious Engleside Hotel in Beach Haven.

Robert Barclay Engle was born on March 6, 1834 in Hainesport, Burlington County, New Jersey. Educated at lo-cal schools, he later attended Friends Boarding School in Westtown, Pennsylvania. Engle became a teacher but turned to farming after only four years. He married Jane Darnell in 1857. Together, they had two sons, David D. Engle, and Robert Fry Engle.

Citing what might be called a midlife crisis, Robert Barclay Engle moved to Beach Haven, New Jersey in 1875 to manage a hotel – the Parry House. There he found his true calling. The Biological Review of Camden and Burlington County, NJ described his relocation to the shore:

“…a change of scene and occupation being desirable, Mr. Engle moved to Beach Haven, on the lower end of Long Beach [sic] in Ocean County, a stretch of land barely redeemable from the broad Atlantic.”

Unfortunately, the Parry House burned down in 1881. But, by that time, Robert Barclay Engle, and his cousin Samuel T. Engle, who provided much of the financial backing, had purchased land in Beach Haven in January of 1876 and construction of The Engleside Hotel had already begun. 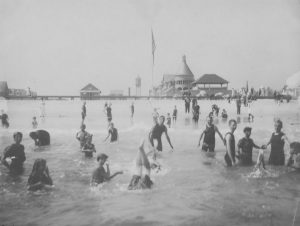 Hotel guests in the breakers.

A June 29, 1883 advertisement in the Philadelphia Inquirer stated The Engleside was open for the season with “thoroughly sanitary arrangements.” A steamboat connected with the Tuckerton Railroad to take summer visitors to the island. No detail was overlooked for hotel guests. The Engleside attracted families and Robert Barclay Engle went so far as to bring Guernsey cows from his Mt. Holly farm to Beach Haven to provide fresh milk for the children of guests. For wealthy Philadelphians, The Engleside quickly became the fashion-able place to stay.

Robert Barclay Engle was known to be public spirited and progressive. He was one of the first members to serve on the Beach Haven Borough Council and was elected to the New Jersey Senate.

His son, Robert Fry Engle had trained as a professional photographer under Burton Holmes and was pursuing his own career when called home to help his ailing father run the hotel. By 1895 father and son were touring hotels in Colorado, looking for ways to improve The Engleside. A year later the Tuckerton Beacon reported a complete refurbishment of the dining room with new chairs “more suited to the rich class of guests which The Engleside entertains…and spending thousands of dollars in mate-rial to please the eyes of his guests.”

The torch passed to son Robert Fry Engle around 1890. By May of 1901, Robert Barclay Engle was dead. According to Charles Edger Nash in The Lure of Long Beach, “The hotel property was then incorporated under the title of The Engleside Company of which Robert Fry Engle is manager.”

He followed his father’s lead to provide only the best for his guests; one winter 175 tons of ice was taken from Lake Pohatcong in Tuckerton. Cut into blocks and stored in ice houses packed with straw, the ice was a luxury enjoyed by hotel guests in the heat of summer. Known far and wide, in 1907 the Baltimore American praised the hotel: “Match-less bay for sailing and fishing, perfect beach and bathing, The Engleside has all modern conveniences, private baths with salt and fresh water.” New York, Philadelphia, and New Jersey newspapers regularly re-ported the social scene, noting who visited, the sport in which they partook, and the tea dances attended. Unlike its competitors, The Engleside never served alcohol, but there were tennis courts, croquet, concerts, baseball, and dances all summer. 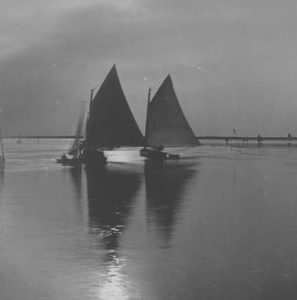 As his father before him, Robert Fry Engle devoted his life to Ocean County. He served as president of the Long Beach Island Board of Trade from 1938 to 1940, was president of the Mosquito Control Commission, and a member of the New Jersey State Board of Commerce and Navigation in Trenton.

Robert Fry Engle’s love of photography continued during his years in Beach Haven. Taking photographs of gunning, sailing, children on the beach, and friends, he did all his developing in a dark room off his Engleside office. Many photos were panographed, known today as panoramic. Attracting other photographers to Beach Haven, they all followed his lead, including photographing from the highest places around town available such as the water tower and Hotel Baldwin turrets.

But in the 1930s, two things contributed to the end of The Engleside. There were fewer guests – a reflection of the Great Depression – and the buildings needed maintenance. Despite owing back taxes, Robert Fry Engle refused to increase room rates, nor would he apply for a lucrative liquor license after the repeal of Prohibition, unlike the Baldwin Hotel which profited from a lively bar.

In addition, Robert Fry Engle’s health declined. The hotel was lost through nonpayment of taxes and torn down in 1943. On December 26, 1943 at age seventy-five, Robert Fry Engle died at Bryn Mawr Hospital in Pennsylvania. His obituary stated:

“He embodied the staunch Quaker tradition of honesty and fair dealing. Island friends recalled over and over in their minds and heart his service and love for Beach Haven.”

“We in the Boro of Beach Haven have always followed the trail of progress blazed by Mr. Engle in his 33 years of faithful public service on the Boro Council. His vision and foresight were al-ways many years in advance of events…”

The Tuckerton Beacon portrayed him as a Long Beach Island pioneer and “an extraordinary contributor to the island and county, prominent in every public movement on the island…”

The largest and most enduring legacy of Robert Fry Engle is his photographic history of Beach Haven which he generously shared with friends and organizations. Photos found over the years, and albums received by the New Jersey Maritime Museum, are now shared with the public by the Long Beach Island Historical Association and the Beach Haven Library Museum. The Engleside Hotel property was never developed and is now Veteran’s Memorial Park.