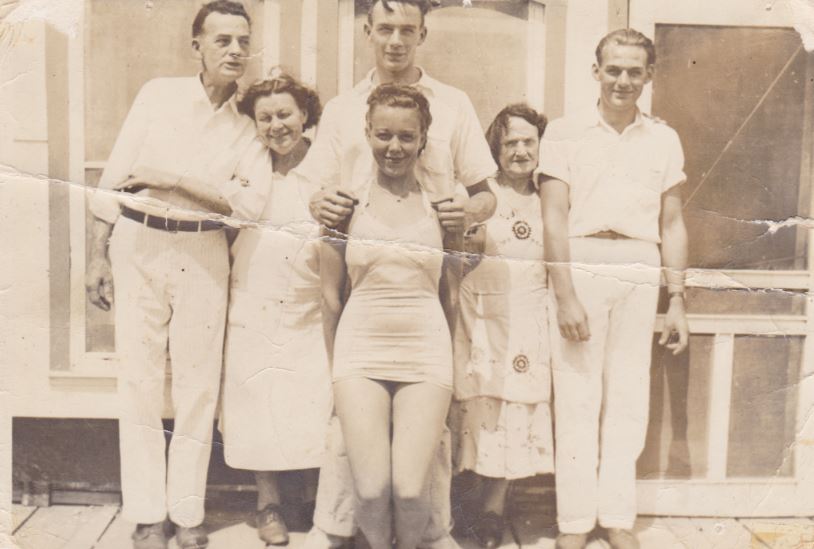 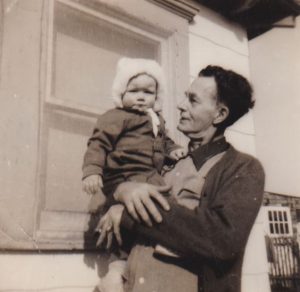 In the 1920s as “Nucky” Thompson in HBO’s “Boardwalk Empire” was celebrating Atlantic City’s entry into Prohibition – with its liquored-up excesses and crime-drenched glamour – Charlie Fackler, the original “Dutchman,” was some twenty miles due north staking claim to his own kingdom by the sea, the salt-stained mud-flats of Cedar Bonnet Island.

World War I was in the rear view mirror and the “Roaring 20s” lay just up ahead. It was a time of changing gears and shifting fortunes. So, for Char-lie, a baker living in Bordentown, cooped up too long tending a hot oven, the idea of living by his wits surrounded by a swirling sea and sky must have held great appeal.

He loved to hunt and fish, so he no doubt realized that the needs of the well-heeled sporting-class weren’t being met in such a remote locale. Where would they find rods and reels? Cigarettes and bug juice? Shotgun shells or candy? Where would they eat? And more importantly, where would they drink? 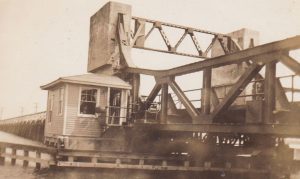 As legend has it, early one Sunday morning in 1922 Charlie left Trenton on his motorcycle and showed up later that same day on the eastern end of the wood-plank bridge to LBI. As he climbed down from his bike to look around – Barnegat Bay, wrapping around the emerald green Cedar Bonnet like a sparkling jewel, must have dazzled him.

In short order, a deed for a patch of bayfront just across from the gentleman’s hunting club, Duck Inn, had his name on it, purchased from the C. H. Cranmer and Hazelton families of Manahawkin. Soon Charlie’s wife Carrie, son Jack, and infant twins Betty and Bill, would join him and his business was born. After the repeal of Prohibition in 1933, Charlie applied for and was issued the very first liquor license in Stafford Township. For the next thirty-plus years Charlie’s Bar, with its ramshackle bait, tackle and rowboat business, flourished as a destination for locals and out-of-towners alike.

Before her passing in 2017 at the age of ninety-seven, Charlie’s daughter, Betty, remembered her legendary father and their wild, isolated life on Cedar Bon-net. At the urging of her daughter, Kathy Bohan Roma, who still lives on LBI, Betty wrote a memoir shortly before her death which describes in great detail a life steeped in hard work and hardship, but also the exhilaration and freedom of growing up on Barnegat Bay.

“We were like pagans on a deserted island,” Betty writes. “No electricity, no running water, no heat except for a pot bellied stove. Mother caught rainwater in a huge barrel and the path to our backyard privy would flood with the tide. Until I was fourteen, it was just us and the bridge tender’s family. Except for going to school, only twice as a girl did I ever leave Cedar Bonnet, those times when I’d been invited to visit another family to see how they lived.”

Instead, the natural-born tomboy threw herself into island life, catching minnows for the bait shop, swabbing out rental boats, and tending the watery pens which held clams and soft-shell crabs. “Once we had a turtle too big to fit in a wash tub so it was decided we’d set him free,” Betty writes. “I swam with him halfway out into the bay hoping he’d make it back to the ocean.” And when mother Carrie wanted to bake a cake, Betty went hunting in the marsh grass for duck eggs.

Another time she remembers taking a ride on the draw bridge which linked their little island to the outside world. Betty writes, “One day, as it was being raised to allow the passage of a masted sailboat, I closed the safety gates to stop traffic and when the bridge began to tilt skyward I jumped up on the iron railing and rode to the top for an aerial view. Oh, what a rush!” The second time she tried that stunt the bridge tender saw her and she got a scolding. But that first time had been well worth it. 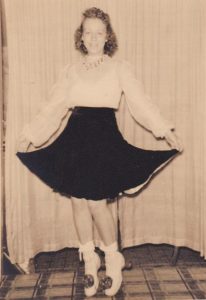 As an athletic teenager, Betty discovered roller skating, a high energy escape from her solitude. Having formed a club dubbed “The Skater Bugs,” she and her friends would often gather at rinks in West Creek, Surf City, and even in Mays Landing, which became their favorite.

But ultimately it was her charismatic father who stirred the Cedar Bonnet drink and provided the antics which had his customers coming back for more. “He had a head for business and innovative ideas,” Betty writes. “He’d bring home anything from the fishery that would attract attention, including one time a huge hammerhead shark. In the front picture window of his shop he set up a pen which held a number of rattlesnakes. When teased they’d spit venom on the glass. Anything to get people to come around.”

When Charlie finally purchased a four-wheeled vehicle for the business, an old Model-T Ford, he removed the backseat and converted it into a flatbed truck, which came in handy during the frequent runs to the ice house in Beach Haven. “What a brain he had!”

Old timers still talk about “Charlie’s Bar” with a giddy reverence – like a vanished Mecca on the marsh. A place where the tide might lift up the floorboards but the beer never stopped flowing. “Move every-thing to the high side!,” Charlie would yell as a storm set in. When the place was packed, one hundred dollar bills often crossed the bar to keep the good times rolling. Sandwiched in between the mainland “stump jumpers,” the bayside “clam diggers,” and 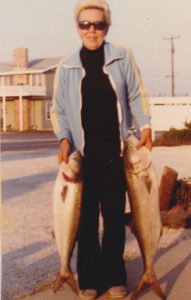 the moneyed “swells,” it’s said “there weren’t three people who didn’t know each other.”

Betty graduated Tuckerton High School in 1938 and married Jersey City native Master Sgt. Peter Bohan in 1942. After the war they raised three children, first with her parents on Cedar Bonnet, and later on LBI. For many years, Betty worked for the Shapiro brothers, developers of LBI and Beach Haven West. Peter became Long Beach Township Chief of Police after the tragic death of Chief Angelo J. Leonetti, who perished during the infamous storm of March 1962.

A community dynamo, Betty was known up and down the island for her good works and organizational skills, including the founding of a ladies’ surf fishing club, an early board member of Ocean County Hospital in Manahawkin, and proprietor of LBI’s first vitamin and health food store.

By the early 1950s, the good times for Charlie’s Bar were coming to an end. After some four decades the business had outgrown the fam-ily’s ability to manage it and was sold to Otto and Thekla Schmid, who changed the name to the Bay Shore Bar. After the storm of 1962, they were forced to rebuild and re-opened as The Dutchman’s Brauhaus, a fitting tribute to the memory of Charlie Fackler. Today, the popular bar and restaurant, still owned by the Schmid family, is undergoing extensive renovations with plans for a grand reopening in 2020. No doubt the original Dutchman would be proud.