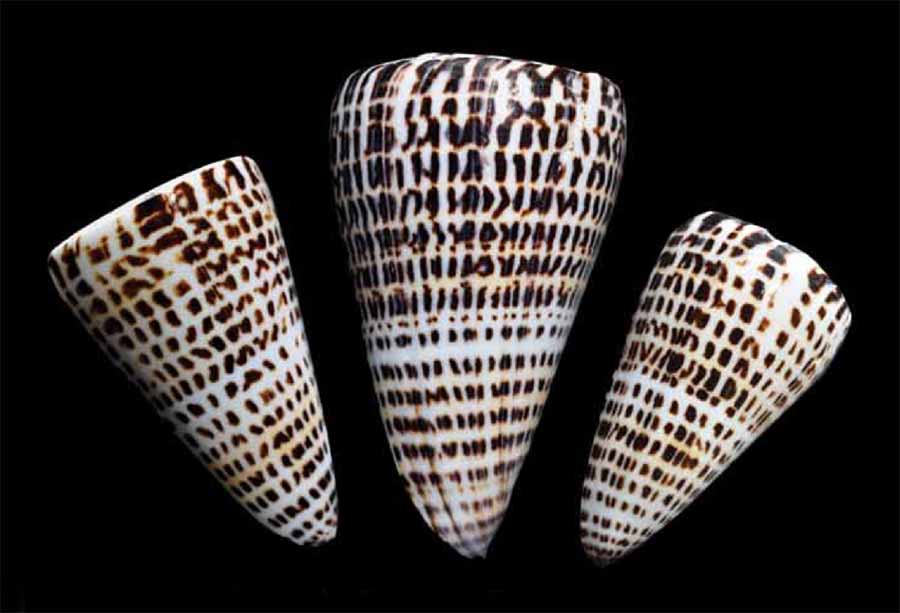 Since ancient times man has collected shells from the beach. Highly prized and treasured, shell necklaces have been found in Neanderthal graves. In more contemporary eras, Native Americans used shells in jewelry, rituals and trade. Victorian homes frequently had a cabinet of curiosities displaying shells collected from around the world. World-wide, shell collecting continues to be an increasingly popular avocation. Travelers to tropical and subtropical beaches seeking souvenirs should be wary of a stealthy gastropod. Its striking beauty belies a deadly secretive predator with the potential to paralyze and kill.

The lettered cone snail, Conus litteratus is part of a family of predatory sea snails that make up some of the most-deadly creatures in the world. The translation of its scientific name “cone marked with letters,” clearly refers to the unique letter-like patterns on its shell. The original name of this species, Conus arabicus, may be attributed to the fact that some of the patterns are similar to early Arabic letters. Just like fingerprints each cone shell has a different pattern. Occasionally, words can be made out from the letter-like patterns. Interpreted by some as a secret message. Shells with words are popular among collectors.

Lettered cones are found in the Indo-Pacific and Indian Ocean, a range stretching from Madagascar to Australia, the Philippines and southern Japan. Around 300 BCE , the Yayoi People of West Kyushu, Japan traveled extensively between the Korean peninsula and Okinawa in search of Lettered cone shells. Fashioned into bracelets for an elite class of women, the shells were in high demand. Anthropologists believe the Lettered cone shell had such value to the Yayoi because of the treacherous journey and deadly risk required to gather them. Lettered cone bracelets have been discovered among remains in graves of Yayoi women of a specific elite class.

Despite its deadly potential, cone shells are prized for their unique beauty. The carnivorous cone snail uses a powerful harpoon, the toxoglossan radula, loaded on an extendable proboscis to stab fast moving prey. Unfortunately for careless beach goers and unaware shell collectors it also uses it for defense. Signs on many tropical and subtropical beaches warn visitors of the deadly danger of cone snails. Currently the subject of neuroscientific research, Letter cone snail venom or conotoxin may show promise in the treatment of neurological diseases, such as Alzheimer’s, Parkinson’s, depression, and epilepsy. Concentrated amounts of venom from some cone species has shown to be a potent pain reliever one-thousand times stronger than morphine.