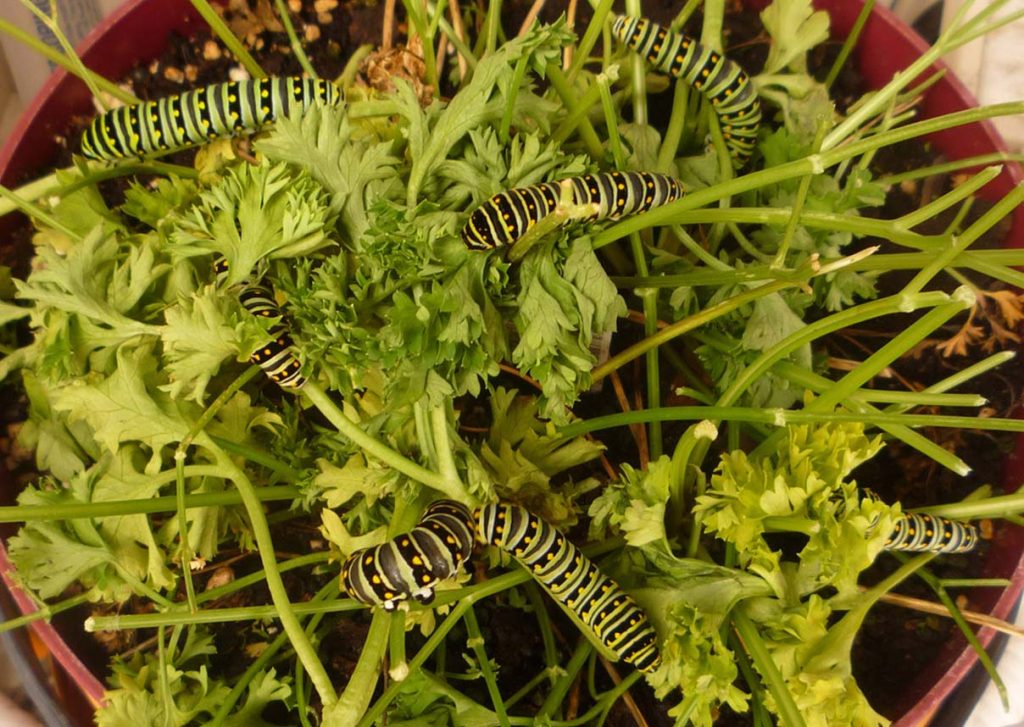 Photography and text by Vickie VanDoren

In early September 2015, I noticed a yellow and black swallowtail butterfly (Papilio polyxenes) hanging around our porch. We enjoyed watching it rest on some of the plants. One day while watering those plants I noticed a green and yellow caterpillar wandering around on the parsley. More caterpillars appeared in the next few days (a total of seven). They began eating all the tender leaves of the parsley.

As they grew fatter and the parsley became sparse I went in search of more parsley but they were not interested. They wandered off. Like a good steward I would retrieve them and put them back in what I now referred to as their parsley. I would count them and search for those that had wandered off. Soon it became apparent that they knew what they were doing and I had to let them go. Their story could easily have ended here. 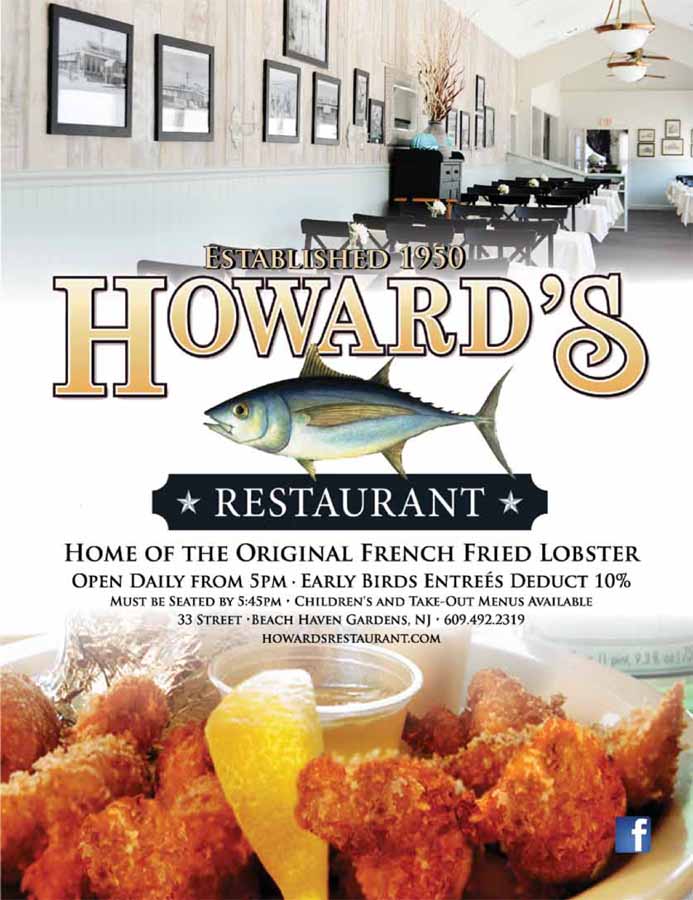 Late in October while moving all of the porch furniture and decorations inside I found four chrysalises: one on the back of a chair, one on the underside of a beach toy and two attached to fish netting that I found after they went through the wash. The chrysalises still attached to the chair and beach toy were moved back to the porch in the spring with no expectations of when or if they would become butterflies. The two that went through the wash were left in a dish by the washing machine.

One morning in late May while watering this year’s plants I noticed that the beach toy had a butterfly on it. Like a proud mom I grabbed my camera and started snapping pictures. One chrysalis had survived the winter and was now a beautiful butterfly. About a week later the one on the back of the chair emerged A few days later I found a butterfly that came out of chrysalis that I have no idea where it had been. And the fourth one flew out of the house one day when I opened the front door. Four out of seven survived!

Typically, a butterfly will lay its eggs on or near a plant that will provide nourishment for the caterpillar when it hatches. Swallowtails tend to like parsley, carrot leaves, dill and fennel. It takes about 7-10 days for the larva to hatch after the eggs are laid and gradually grow into a fat caterpillar. The caterpillar will eat and go through a series of molts or instars for the next week to ten days.

When they’ve outgrown their current skin, a hormone called ecdysone is released triggering the larva to molt. After it molts about five times, the larva stops eating. When the caterpillar prepares to turn into a butterfly, it attaches to a sturdy item by a fine thread. About 24 hours after it has attached, it emerges from its outer skin and the chrysalis is exposed. This is where its life becomes interesting. 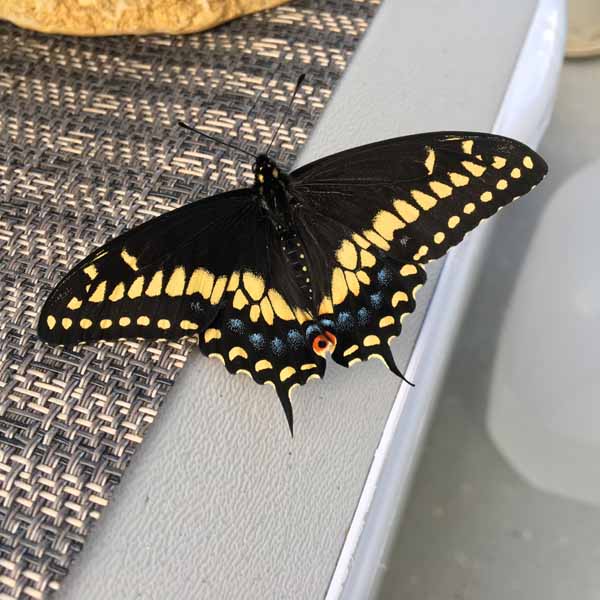 Cells in the muscles, gut and salivary glands are digested and act as spare parts for the soon-to-be butterfly. Each cell self-destructs through the activation of enzymes called caspases that reprograms the characteristics of the cells. Once a caterpillar has disintegrated, imaginal cells, which are genetically identical to the previous cells, react differently forming the wings, antennae, legs, eyes and other parts of an adult butterfly. Basically the DNA reconfigures itself allowing it to morph from a caterpillar into a butterfly. Ideally it takes a few weeks for the butterfly to emerge as long as there are minimum of 14 hours of daylight and temperatures around 70. When the entire metamorphosis has occurred, the butterfly will break through the chrysalis, gradually spread its wings so it can dry and then fly away.

The black swallowtail butterfly became the official New Jersey State Butterfly in 2015 and was signed into law on January 11, 2016 by Governor Christie. The Swallowtail is indigenous to New Jersey and is found in all 21 counties. At press time swallowtail butterflies were seen flying around the porch. Time will tell if the next generation will continue its life cycle on this LBI porch.

This morning, August 31, 2017, there was another swallowtail butterfly laying eggs on my parsley. I assume it’s a different swallowtail from last year’s, or perhaps it was one of the caterpillars who ate my parsley last year. I found it fascinating nonetheless. Once again my parsley will become a nursery for young caterpillars, and hopefully, more of this amazing butterfly species.