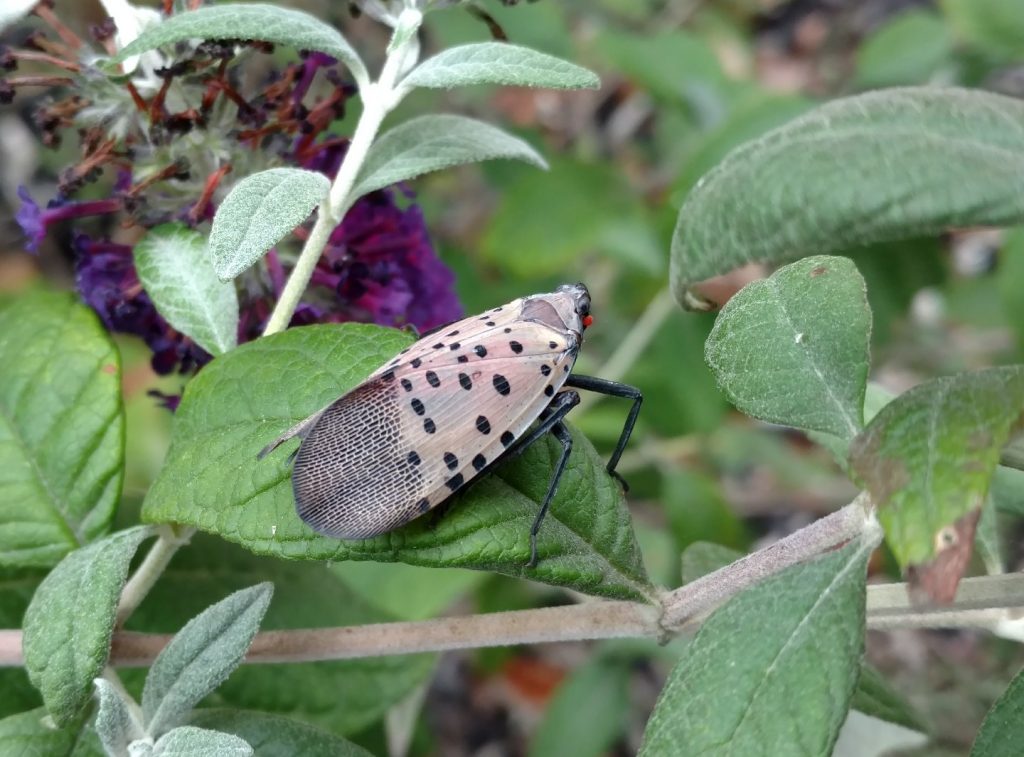 By Mary Wilding and Sara Caruso

Nature has a very delicate balance. Every flora, fauna, and fungus specialize in occupying a particular niche and serving a specific purpose in the ecosystem. Unfortunately, the activities of humans can have unintentional consequences, resulting in a non-native species ending up where it does not belong. In a favorable environment with few, if any, natural predators, invasive species can thrive, spread, and harm existing native species. One of these invaders, the spotted lanternfly, has spread rapidly throughout the east and central regions of the United States since it was first identified in 2014, in Berks County, Pennsylvania.

The spotted lanternfly (Lycorma delicatula) is native to Asia, in particular India, China, and Vietnam. Despite its name, the spotted lanternfly is not a fly, but a species of planthopper of the Fulgoridae family in the subfamily Aphaeninae. The life cycle of the lanternfly begins in masses of thirty to fifty eggs, which are present from October to July. Hatching lanternflies can be observed from late April until June, and appear as small white, beetle-like nymphs. These nymphs, known as instars, turn black with white spots as their exoskeletons harden. Over the next few days, nymphs mature into juveniles, becoming red and black with distinctive white polka dots. In late July through August juveniles mature into adults with their trademark black-spotted, pinkish-tan outer wings, and under wings displaying bright red patches with black spots. Adult lanternflies are about one inch long and are present July through December, or until there is a heavy frost. 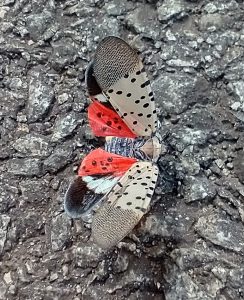 Lanternflies lay their egg masses on flat surfaces, and it is believed they were introduced to the United State via a shipment of cut stone. Initially they were found on their host the tree-of-heaven (Ailanthus altissima), another invasive Asian species that was introduced into the United States by gardeners in the late 1700s.

The spotted lanternfly uses a drill-like mouthpart to feed on the sap of host trees. It is an indiscriminate feeder with a strong preference for economically important plants such as grapevines, fruit trees, valuable native trees, and ornamental shrubs.

The lanternfly’s attack is twofold. First, as it feeds the spotted lanternfly excretes a sweet sugary substance called honeydew which attracts wasps and other insects. Honeydew also promotes the growth of sooty mold, a fungus that builds up on the host tree and surrounding forest. The mold can also accumulate on understories, patio furniture, cars, and anything else found below a feeding spotted lanternfly. For smaller plants, the layer of fungus prevents sunlight from reaching the leaves, stopping photosynthesis, and eventually resulting in death. Second, the spotted lanternfly poses a threat to crops which can affect food supplies and impact the economy.

As of 2021, all of New Jersey, except Cape May County, reported the presence of spotted lanternflies. Regionally, Pennsylvania, New York, Delaware, Maryland, Virginia, West Virginia, Ohio, and Indiana have infestations. There is a high probability the spread could go through the nation’s corn belt, and to the central valley and coastal areas of California as conditions are right to support the insect. Methods to manage it are underway, and there are some simple strategies which can be implemented immediately. The Department of Agriculture has begun the Stomp It Out campaign, encouraging the public to destroy the highly destructive insects. 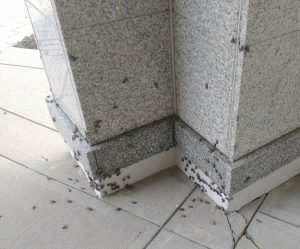 Physical, non-chemical management is the safest and quickest line of defense. Learn to identify the lanternfly’s favorite host plant, the tree-of-heaven, remove it from your garden and dispose of it in a sealed plastic bag. Learn to identify lanternfly egg masses on flat surfaces such as trees, branches, cars, patio furniture, and hardscape walls. Remove egg masses with a putty knife or old credit card. Scrape the mass into doubled plastic bags containing rubbing alcohol or hand sanitizer. Seal the bags carefully and place them in the trash. Sticky tree bands can be wrapped around the trunk of an affected tree but should be shielded with chicken wire or mesh to prevent small animals from getting stuck. Replace the sticky bands frequently to ensure new lanternflies get stuck. Large swarms can be sucked up with a shop-vac and dispatched in a mixture of water and dish detergent. And of course, the simplest way is to Stomp it Out!

While it may feel cruel to destroy a seemingly innocent, colorful insect it is important to remember what is at stake. Together we can stop the spread of the spotted lanternfly and help protect the delicate balance of our ecosystem.

Encounters with the spotted lanternfly should be reported to the New Jersey Department of Agriculture at www.badbug.nj.gov