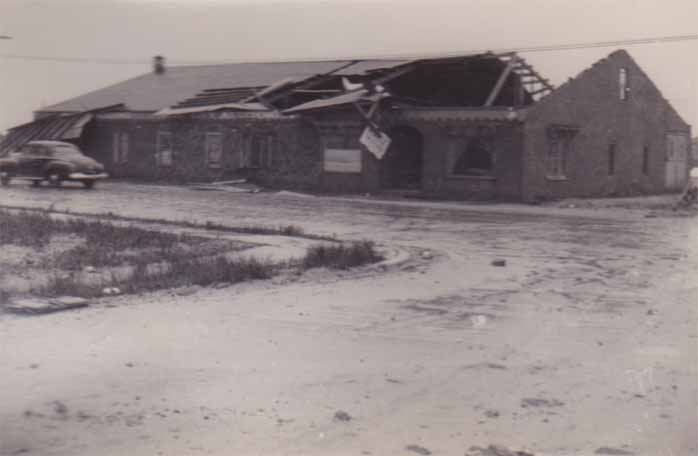 Skating rink in Surf City after the Storm of 1944

It’s 1936. “Don’t Fence Me In” plays on the Philco radio as Betty Fackler (born February 15, 1921) escapes her dad’s bar on Cedar Bonnet Island (today The Dutchman’s). The lyrics fit her romping, tomboy personality. A Tuckerton high school student, she liked any excuse to be on the bay or lace up her roller skates and head to Ship Bottom across the old wooden drawbridge.

Twin brother Bill and older brother Jack didn’t mind doing the chores at the restaurant of the thriving business. Started in 1923 as a bait and snack shack, Betty’s father Charlie Fackler expanded in 1933 when the Depression ended and a liquor license was obtained. One day Betty headed to work at Lynn Photo to earn gas money for the family car (thirty-six cents a gallon). She used the family car more than her dad. Ever the instigator, most days she picked up her girlfriends Ellie Cramer, Ann Hannold, Veryl Price, and the Johnson sisters to skate at the Manahawkin rink owned by Berthe Beisic. The group was known as the Skater Bugs sporting custom-made jackets of yellow satin, lettered and trimmed in brown. The approximate twenty-five by forty foot cedar shake building was a teen hangout into the 1960s. Today the lot on Bay Avenue fills with vendors each weekend as a flea market.

Before World War II, roller skating was the biggest entertainment for teens in the country, providing physical activity and opportunities to spend time with the opposite sex. Subdued lights, slow music for couples, fast tunes to show off technique, and even faster music for the guys to race and impress the girls. Betty drove the gang to rinks 40 miles away to perform their routines and meet new kids on weekends. One eventful excursion found them in Washington DC flirting with the room service guy after a full day watching a roller derby.

During Betty’s high school years, skating was the rage in every town in the US. There were competition roller derbies with traveling teams in all the major cities. Huge crowds came to cheer and bet on their favorite team. By 1939 spectators were thrilled watching competitors pushing and shoving while they sped round an oval rink. Then the war forced the bleachers and rinks to empty when young people enlisted, thereby causing the sport to dwindle in popularity.

In 1941, Betty was shopping at Koseff’s in Beach Haven and was introduced to a handsome soldier by the store owner. Abe Koseff started three businesses in the early 1930s: a tackle store, a general merchandise emporium, and the first pull-up gas station in town. He generously provided discounts and credit to servicemen from Fort Dix during the war.

There was an immediate attraction to Peter Bohan who was billeted at the old Wida’s Hotel in Brant Beach and patrolled the Island to watch for U-boats. He skated into her heart that day, soon proposing and marrying sweet Skater Bug Betty on November 18, 1942. And her wonderful roller skates? They were passed on to a younger friend on Cedar Bonnet Island who skated into her own adventures.

Anyone with images or stories of their time at the the skating rink, please send to echoesoflbi@gmail.com.