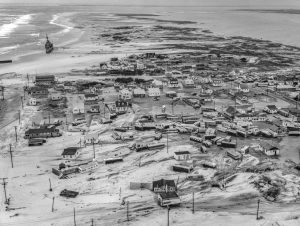 USS Monssen aground in a devastated Holgate.

“Today, tonight, and tomorrow cloudy, chance of snow developing, possibly mixed with rain. Highest temperature today and tomorrow in the 30s, lowest tonight about 30 degrees. 10 to 15 mile-an-hour northeast winds tomorrow. Wednesday partly cloudy, not much change in temperature.” That was the forecast issued by the National Weather Bureau 60 years ago on Monday, March 5, 1962. What would actually follow was arguably the most catastrophic storm to ever hit Long Beach Island. There are ferocious others in the historical record. But none caught everyone by such surprise and lasted so long as to seer itself into the memory of all who endured the Five High, or Ash Wednesday, storm that wreaked havoc upon the Island for five horrific tides across three days.

What began as an ordinary low-pressure system moving off the North Carolina coast, which would normally continue out to sea or as sometimes happened, redevelop and push NE as a storm of varied strength affecting some parts of the mid-Atlantic with a snowstorm, developed, indeed, into a nor’easter but was forced into an unusual stall off the Delmarva peninsula. A blocking pattern was in place thanks to a strong area of high pressure over southern Ontario that slowed and suppressed storm systems underneath it. In March 1962, this setup not only suppressed the low undergoing explosive growth known as “bombogenesis” off the east coast, but it held the storm there for over three days in just the right spot to inflict maximum damage. The results on the ground were nothing short of apocalyptic, especially on Long Beach Island.

As Tuesday, March 6, dawned, so did the realization that something terrible was about to happen. The dull forecast of the day before was replaced with something more eventful that still grossly misjudged what was to come. “Tomorrow will be partly cloudy with the high in the 30s. The east winds are expected to be 50 – to 60 – miles-and-hour today, slowly diminishing and shifting to northeast and northwest tomorrow.” That afternoon, weather observers would report sustained winds of 65 mph along the coast, with gusts near hurricane force. Tides, already high thanks to a full moon, were expected to be three-to-five feet above normal. Before the day was over, there were reports of “heavy damage” on the Island. Late word reached the media that a destroyer, the USS Monssen, under tow to Philadelphia for storage, had broken loose from her line and came ashore below Holgate. Fortunately, her tug, the Penobscot, and crew made it safely to the destination. 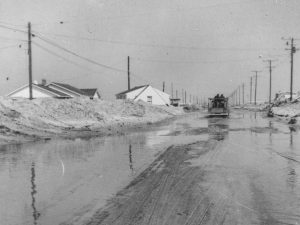 The Monssen wasn’t the only vessel to get tossed around. As The Asbury Park Press reported, “The schooner, Lucy Evelyn, now a 140-foot, 800-ton gift shop and marine museum in Beach Haven, nearly went out to sea again. The old Maine lumber packet was raised from its landlocked berth on the bayside in Beach Haven, where it has rested since 1948. “Our first shop went out to sea in the 1944 hurricane, so we decided to get one that would float,” said Mrs. Nat Ewer. But when it was run ashore on a high tide and surrounded with earth, she and her husband never expected to see it float again. [On March 8], the red water line of the Lucy Evelyn is a good three feet above the broken sidewalk.”

By Wednesday, the storm was still raging, and the effects were devastating. Six Islanders were reported missing, including a police chief and town official attempting a rescue. Two couples being evacuated along a washed-out road on the south end were said to have been taken by eight-to-ten-foot waves breaking over the road. Seven Atlantic City Electric workmen were unaccounted for. All the while, frantic evacuations were underway by truck, boat and even helicopter. Over 900 who hadn’t left before things deteriorated were assisted off the Island on Wednesday and sheltered at Southern Regional High School.

Thursday, March 8 revealed even more damage as the skies finally began to clear, even though the massive storm’s effects were still being felt with three-foot high tides and gusty winds betraying the comfort of sunshine finally poking through after days of gloom. On Thursday alone, thirty-two more cottages were lost in Ship Bottom. In hard-hit Harvey Cedars, the clearing conditions revealed that 183 out of its 352 homes were destroyed, with most of the rest suffering significant damage. Most problematically, the ocean and bay had cut through LBI in four places, dividing it into islands that would slow rescue efforts.

The situation for survivors and emergency personnel on the Island was dire. Electricity, water, sewer, and telephone were out everywhere. Rescue efforts at the state level were begun by the Conservation Department. The National Guard was dispatched to supply drinking water. Bell Telephone sent 200 workmen. First responders began searching homes for survivors, human and animal. And, sadly, the process of recovery also got underway with the discovery of the body of one of the couples who were swept away the day before. He was found twenty-five miles south — washed into Ocean City. Security was also a chief concern as looting was witnessed. 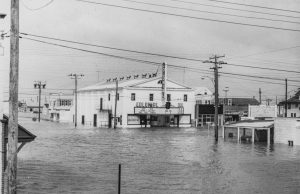 By Friday, March 9, forty-eight hours had passed since the storm ended and yet the situation appeared to be going downhill in spite of the effective but uncoordinated localized rescue and recovery operations. Another body was found in Ocean City, followed by a third the next day. Partially restored power was going out again as frozen saltwater spray accumulated on the lines while swamped substations began shorting out. In Beach Haven, the lone pumphouse keeping drinking water flowing caught fire and burned out of control. The sewer system for the entire Island was badly damaged. A Navy helicopter surveying the effort to free the Monssen crashed offshore, the pilots escaping serious injury. Initial estimates calculated damages on the Island at more than $250 million. In Beach Haven, twenty homes were reported destroyed and 90% of the rest severely damaged. Ship Bottom officials counted fifty homes lost, while Surf City reported sixty. Preliminary figures had 200 to 300 properties totally destroyed. That number would later be revised to 600.

Though the storm was gone, things would get worse from here before they got better. The following Tuesday another much weaker storm hit the area with high winds, flood tides and rain, causing additional damage and hampering recovery efforts.

As the days passed, though, the situation at last began to improve. Aid poured in and the Island community slowly re-emerged with the cottages and roads from their sandy burial. Two missing since the storm hit were found alive and well at the still-isolated Harvey Cedars firehouse. The missing Atlantic City Electric crews were found safe. Hundreds were evacuated by boats from Barnegat Light to Forked River until basic services could be restored. Seventy evacuees were airlifted from Harvey Cedars to Ship Bottom where they were then bussed to SRHS. The State Highway Commissioner dispatched scores of heavy equipment to help clear the roads. The Bureau of Forestry sent sixty-five trucks, cranes, loaders, and tractors to help repair the beaches. The ranks of the State Police presence swelled thanks to one-hundred extra troopers assigned to the Island. President John F. Kennedy declared the area a major disaster, freeing up federal funds to match over $100 million in proposed state aid, including $5.3 million for emergency beach replenishment. By the weekend, electricity and water were restored to much of the Island. Residents with livable homes were allowed to return, while those who could only assess their properties were escorted over just for the day. By this time, officials guessed that substantial recovery of the Island would not be completed for at least two months.

In the way that some things never change, the priorities of those overseeing these efforts mirrored those of their counterparts cleaning up from Superstorm Sandy fifty years later. 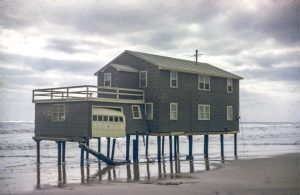 The primary tasks after the 1962 storm were restoring the beaches, securing the gas lines, and preventing looting. With the first two being quickly addressed, state police were tasked with erecting checkpoints on the bridge and boosting patrols in Island towns. Three were arrested by the end of the week. Six more after the weekend. After looters successfully reached the Island at night by boat, the state assigned three of their own to patrol the bay.

As the weeks and months passed, the question many asked, which helped spur advances in weather forecasting in the United States, was how could such a massive storm still sneak up on tens of millions without warning given all the technological advances by then? The answer, in part, was early satellite technology, mankind’s only way to view large scale weather patterns. In a subsequent report, the National Weather Bureau concluded that the particular satellite assigned to observe the east coast was tasked on South American weather patterns during that week.

The reality of the storm of March 1962 is one that lives up to its legendary status. Those who experienced it still speak of it sixty years later. It was this storm that gave rise to the question of when the “next one” would hit the Island. Even so, a new era of innocence followed, with an unusual number of years passing without another devastating hurricane or nor’easter. Forty-nine years later, a direct land-falling tropical storm, Irene, would come and go in 2011 with none of the devastation seen in 1962, leaving some Islanders wondering if modern infrastructure and beach replenishment efforts had made the Island immune to such damage. By 2012, many on Long Beach Island had come to live and summer there after 1962 and had no memory of any truly catastrophic weather having hit the Island. In October 2012, fate, sometimes cruel but always dependable, would initiate the uninitiated about what such storms are like.

Those who lived through the nor’easter of 1962, however, remembered the devastation, worried about the future with such storms inevitable, and appreciated how lucky they were to survive, able to live a treasured but precarious life on a barrier Island in New Jersey. 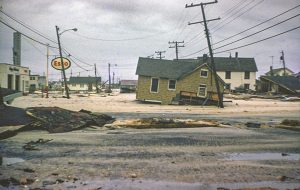 The APP spoke with one survivor in the aftermath who echoed those sentiments. “‘Hurricanes are nothing to what this was. This is the worst it’s ever been.” Randall Evans talking. He’s lived in his house on 15th Street, Surf City, since 1936…The Evans’s were lucky. Water washed past the house but never came in. “We didn’t realize how bad it was until we saw rubble on the street Tuesday morning.” But the Evanses stayed put through the whole storm.