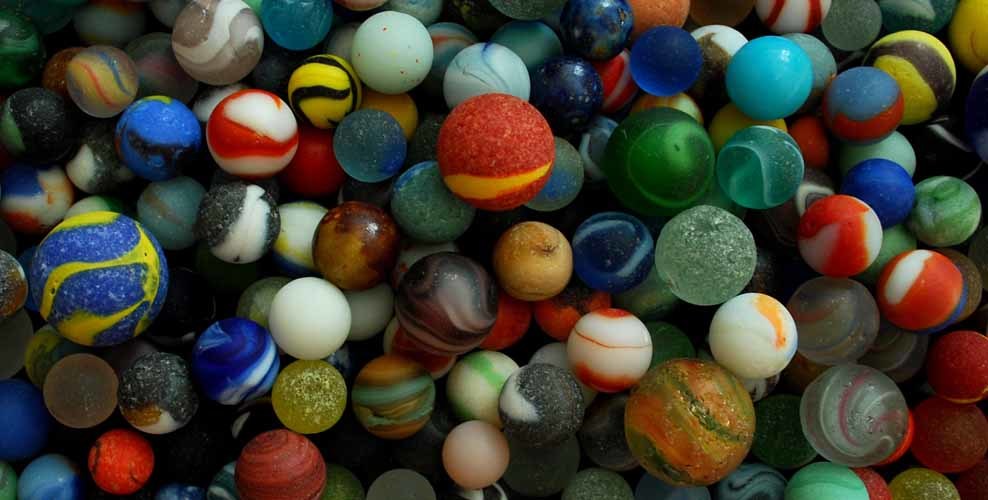 Photography and article by Sara Caruso

Of all our cherished toys in our toy box, those colorful glass balls were the most treasured. The mesmerizing patterns and swirls captivate our minds even as adults. Marbles have a long history from games to gambling, and go back to ancient times. Excavations in Pakistan and Egypt have found marbles of clay and glass that date back 5,000 years ago. In more modern times they have been everything from a toy, to a cushion for railroad tracks, to a form of ship ballast – which may be why some end up on our beaches.

Earthenware, or clay, marbles were the most commonly manufactured marble at one time. According to The Marble Collectors Society of America, they were reportedly produced in Germany and shipped across the sea to be sold in the United States. An ongoing theory is that the marbles were stored in the keel of the ships and may have acted as temporary ballast. An example of this is the Italian bark the Fortuna which shipwrecked in what is now Ship Bottom, New Jersey in 1910. Its iron hull contained no cargo, only terracotta roofing tiles which acted as ballast. It shipwrecked off the coast of Long Beach Island and spilled the tiles into the surf.

Just like the Fortuna, sometimes the marble carrying ships didn’t make the full journey and sunk with the ship. New research has found that clay marbles were not used as ballast by all ships, stating instead they used sand or stone – a much cheaper material. The use of marbles strictly as ballast is likely a misunderstanding. The colorful glass marbles we seek, however, did not originate from shipwrecks.

At one time creating glass marbles was a rare art form. A skilled glass blower would pinch and form a perfect sphere and create a masterful piece. Marbles became a way for glass factories to use up the glass leftover from the day, however there were many marble making companies. Some of the earliest patents in the U.S. are for marble making devices. One such company was Akro Agate. Formed in 1910 in Akron, Ohio. It was the largest producer of toy marbles in the country. It later moved to Clarksburg, West Virginia in 1914 where it remained until it claimed bankruptcy in 1951. Most of the colors and swirled sea glass marbles found on U.S. beaches are from this company. How they end up in the sea is a mystery to most sea glass hunters. 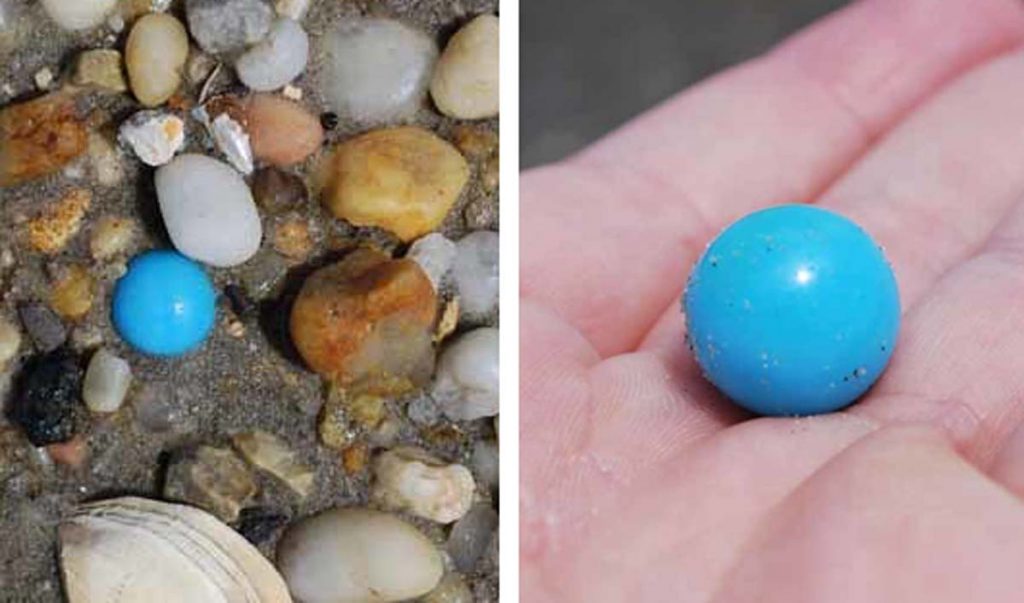 Marble found on the bay side of LBI

There are several theories as to why we find the colorful glass marbles on the beach. Children would play marbles in the sand and sometimes accidentally leave them behind. Some may have intentionally been thrown in the sea. My brother would shoot marbles into the surf with a slingshot at Rockaway Beach in New York back in the 1970s. Storms could also be a cause of marbles. When a house is damaged and later demolished, children’s toys are easily forgotten and thrown out with the rest of the debris. In the past, dumps were often along bays and waterways which flowed into the ocean. Other sources for marbles may include railroads close to shore. Even in modern times, shooter-sized marbles are used along with the stones under tracks as a cushion when the trains roll over them.

Another source for marbles, especially in the UK, are Codd bottles. These were an early form of bottle, between the late 1800s and early 1900s, that used a marble as a form of stopper. The strange looking pinched neck of the bottle holds the marble in place while the person drinks, but prevents spilling of the contents if inverted. Due to sanitary issues, and an obvious choking hazard, the idea soon faded into history. However, some countries, including India and Japan, still use this bottle today, not always with a marble. Spray paint cans often contained marbles to mix the paint when shaken. Many sea glass hunters go a lifetime without finding a marble, but it is possible if you look in the right places.

Some beaches which were dumps in the past can produce an endless supply of sea marbles. Usually these sites are located along bays rather than oceans. These areas are also great sources for especially old glass and historical finds. The Chesapeake Bay, Dead Horse Bay in New York, and some sites along the Delaware River are good places to find marbles. I myself have found a marble on the bay side of Long Beach Island prior to Superstorm Sandy. If you look in the right place, you may not have to search long. After all, you never know what the next tide will bring.