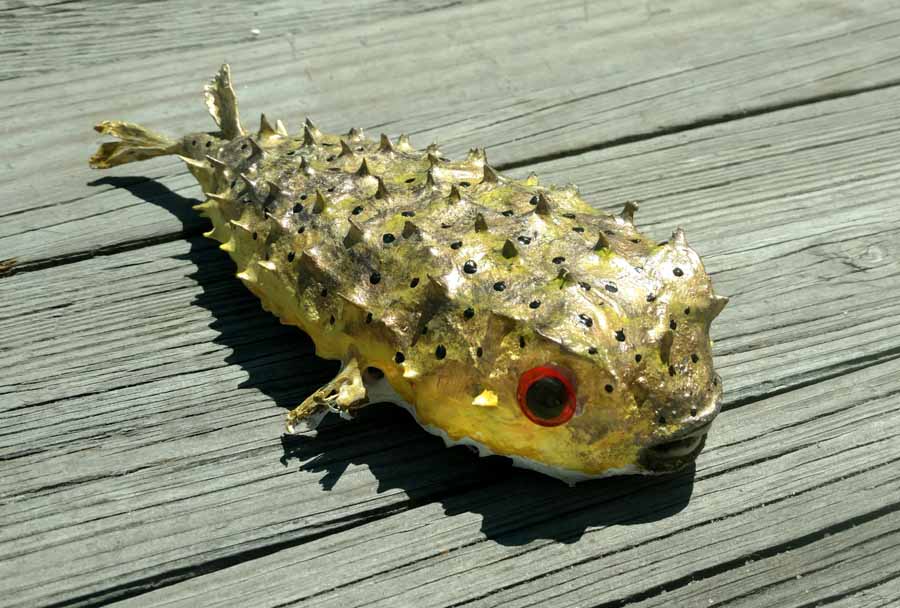 Artwork and text by Cynthia Andes

Anyone who mentions a fondness for blowfish fillets should expect looks of shock and disbelief, followed by the big question, “Aren’t they poisonous?” Blowfish was enjoyed on Long Beach Island many years ago, and is still enjoyed today.

Known for its ability to puff-up into a spiny globe by sucking in water, or air if the fish is out of water, the blowfish or puffer fish may be seen in the waters or on the beaches of Long Beach Island again this season. However, it is no longer the meal time staple they once were. They can still be caught in the bay or ocean. But it is illegal to sell blowfish commercially. According to local Surf City restaurateur, Mike Sulish, blowfish are occasionally requested by customers seeking a dining adventure.

Those who have enjoyed this delicacy describe the flavor as that of any other mild fish, tasting much like perch cheeks to someone from freshwater areas, or flounder to those with salt water palates. To someone unfamiliar with both, the fillets would be enjoyed by anyone who likes chicken, or appreciates the flavor and texture of another delicacy – frog legs.

Blowfish were abundant in the 1960s and 1970s. Over time, changing environmental conditions diminished the eel grass that is so important for small crustaceans, a main food source for blowfish. In recent years as conditions in the bay have improved, the blowfish have started to slowly return.

If a local fisherman or woman did happen to catch a blowfish with a net, or hook and line, the next challenge would be to properly clean the fish so that none of the toxins contained in skin and organs contaminate the small filets located on either side of fish. Some old school cleaners nail the head of the blowfish to a board to hold it steady, and peel back the skin to reveal the edible filets. Others, just hold the fish in-hand – make a horizontal slice behind each eye, and proceed to peel back the skin. Most of the fish itself is then offered to the gulls, crabs and other marine creatures waiting for a meal.

Blowfish have a lot of character and have inspired many artists to render them in both serious and humorous ways. Although their spines can make them difficult to pick up, and their bird-beak like teeth sharp, blowfish are some of the most entertaining fish to watch and certainly some of the most delicious to eat.