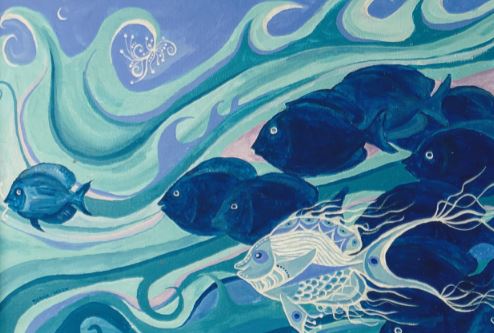 Diana Woodward, a lifelong resident of Ship Bottom, feels as though she has lived forever on Long Beach Island and loved every minute of her experience. “As a child, I lived in the Ship Bottom Life Saving Station. Growing up on the Island back then, the days were long, lazy, and fun-filled. My brother, Daniel, and I would jump into the ocean and drift lazily on a gentle wave that slid us back to the warm sandy beach. Later in the day we’d walk barefoot to the local movie theater. We’d top off the day with ice cream cones at White’s in Ship Bottom,” she recalls nostalgically.

After the innocent days of childhood, Diana emerged as a robust young woman, and was admitted to Syracuse University where she pursued her passion for art. She enjoyed the academic and carefree life of a university student. But Diana’s university days of the 1940s would come to a harrowing halt during the summer of her junior year. She had taken a summer job as a counselor in a children’s day camp. One day, she returned home, and was struck so hard with pain she bent over a chair and called out to her mother. The pain persisted for days.

Worried about the mysterious illness of their daughter, within the week Diana’s parents drove her to a hospital in Philadelphia. She vividly recalls the events of that day. “We sat in the waiting room praying. Soon, the doctor emerged with a concerned look on his face. ‘I’m sorry to tell you, but your daughter has polio. We can move her to a rehab where she may improve,’ he added, offering some hope.’ ” 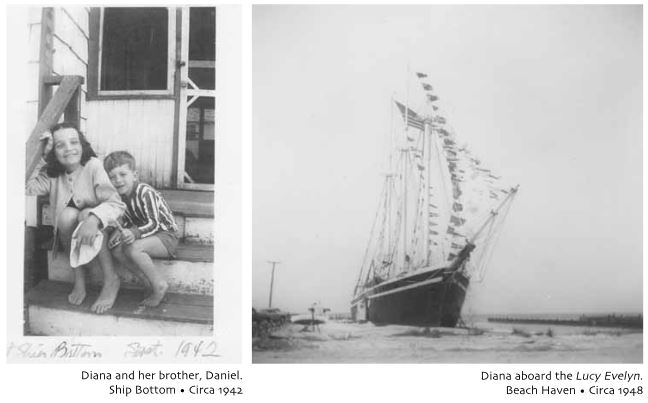 “I listened quietly to the doctor’s words,” said Diana. “I thought about my Quaker upbringing and about the power of the practice of reflection that I learned in the Quaker meetinghouse.”

The young patient was admitted to a rehab hospital in Philadelphia. Determined to overcome polio, Diana put her energy into strengthening her weakened muscles, dreaming of the day she would regain the use of her limbs.

Within time, Diana’s body healed, and she returned to the Island. She regained strength, with only a slight impairment to her left leg, which persists to this day. “One of my favorite memories of the Island is about the Lucy Evelyn when it was moored in Beach Haven,” says Diana. “My mother convinced me to stand in the bow and then she snapped a picture of me.”

Diana obtained a job teaching art in Barnegat Light. Her work as a teacher reminded her that talent can begin at any age. When giving an art lesson to a kindergarten class, she asked the children to draw a picture of her. “I was struck by a little girl’s ability to add details such as my earrings and the child’s perspective of me leaning over the desk.” 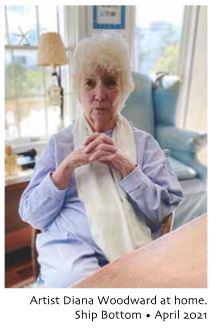 Eventually, Diana married and had two children. “Life still had its ups-and-downs. I experienced losses and grief. But because I seek to keep joy in my life, I can be aware of the pain and discomfort of divorce and the passing of a husband. And I leave room for that pain, but I can also let in the joy of everyday living.”

Diana’s talent is evident throughout her home. Sea-theme paintings decorate a bedroom; shell vases, she crafted, sit as bookends on the fireplace mantle; the fireplace shelf, which holds her treasures, was one “…I dragged home from the beach as driftwood and my husband, Gene, refinished.” she said.

Known and loved as the energetic, former President of the Garden Club of Long Beach Island, Diana recalls, “I think my best contribution to the club has been a tradition I changed. Each year on May Day, members would make a bouquet for other members. I suggested we make bouquets for women in the community who live alone.” That thoughtful idea became a tradition that remains today.

Despite everything, Diana soldiers on. These days, macular degeneration has forced Diana to retire from art, but not life. “I have difficulty reading. But I enjoy listening to audio books every day — just before cocktails with Gene.” Smiling, Diana points to a nearby photo of her husband. “Twenty years ago, Gene and I exchanged vows, in the Quaker Tradition, on the beach at 42nd Street in Brant Beach. He is the love of my life.”