When she entered Barnegat High School, this sweater was the inspiartion for Pooch’s nickname “Birdie”.

The Great Depression had taken hold and her young parents needed to find a place for her father, Reynold Thomas — who had been gassed in World War I — to live a healthy, outdoor life. Pooch’s great-grandfather on her father’s side, John Kinsey, had come to Barnegat Light after the Civil War to open a hotel, and an uncle, J.B. Kinsey, offered the young family a building lot on the bay. So, for these strange and difficult times it seemed the perfect place for the growing Thomas clan to land. 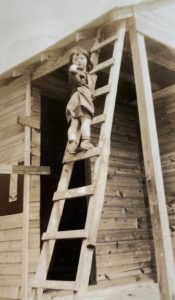 Climbing the ladder to help her father build an addition to the house. Pooch, age 3. 1936.

Eighty-eight years later, seemingly the same dynamo she’s always been, Margaret “Pooch” Thomas Buchholz has lived the better part of her life on Long Beach Island. As the owner and publisher of the free and indispensable Island newspaper, The Beachcomber, from 1955 to 1987, she has contributed in countless ways to the Island’s cultural and business vitality. And as far as I’m concerned, she’s the closest thing this Island has to royalty.

Living today on the same patch of sand where her parents first set that basket down, Pooch vividly recalls a time on LBI accessed now only in photographs. So, sitting with her for this interview — a first-hand telling of “growing up wild on the north end”— feels like a special gift, one which I’ll gladly share.

Of course, the first thing I want to know is why the nickname Pooch? “That came by way of my German nursemaid,” she chuckles. “She called me her little doll, her ‘Püppchen’, which my father morphed into ‘Poochy.’ I hated it as a kid, and didn’t really take to it until the 1990s, when I put it on my license plate; so, I guess I’ve accepted it.” 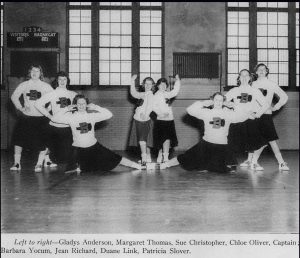 As Pooch tells it, she’s had a lot of nicknames growing up. “At Barnegat High where I played basketball, softball, and was a cheerleader they called me ‘Birdy.’ In college my nickname was ‘Tommie.’ I still have a friend who writes to me that way. And my second husband, Guenter Buchholz, the German architect, preferred Margaret.”

“But wait,” I say, “we’re getting ahead of ourselves. What else can you tell me about Barnegat High in the late 1940s?” “Every day on the bus, sixteen miles over to the mainland and sixteen miles back,” says Pooch. “Some days, on the way home in the late bus — after play rehearsals or sports — when it only went south to drop-off the Beach Haven kids, I’d have to get a ride or hitchhike home from the circle in Ship Bottom.” 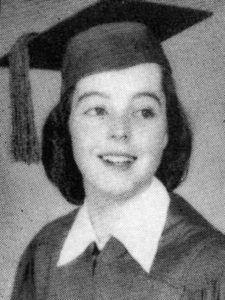 What was it like for girls in Harvey Cedars back then? “Girls?” Pooch quips. “Except in summer there weren’t any other girls my age when my younger brother, Michael, and I were growing up. My friends were all boys, which made me keep up. Joey Meshberg, Jimmy McClellan, and Freddy Slover are a few names that come to mind. Running, jumping, swimming, you name it. We played touch football on the only lawn in town — when the owners weren’t there of course. I would walk out on the top pipe of the floating pontoon of my father’s dredge faster and more gracefully than they could.

Scavenging on the beach, calling dibs on the flotsam and jetsam that washed up from the ships torpedoed offshore, dragging home K-rations, rubber ponchos, life jackets, and the prize catch: a 12-foot rope ladder! And these little glass vials we called yellow bombs which would sort of explode when thrown on the road. They were actually water purifiers from lifeboats. The beach was our playground. Every day was an adventure.” 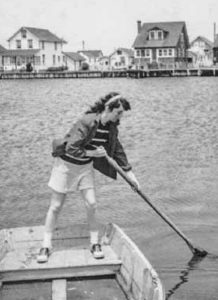 “Weren’t you ever lonely?” I ask. “Not really,” muses Pooch. “Somedays I did need to get away for a little peace and quiet and would take my book up to the beach. I biked to a house on the ocean in Loveladies. It’s still there, with a double row of dunes in front, where I’d lie on the warm sand and read.”

And what about your early LBI job opportunities? “I always worked in the summers. The first money I made was selling softies — soft-shell crabs. I poked them out from behind the bulkhead pilings with my foot into a net and got 25-cents apiece for good-sized ones. Who could turn down a freshly caught crab from a smiling child? Sell a couple of those to Mr. Houghton, who owned the clam bar at 83rd Street, and I could buy a book of Deanna Durbin paper doll cut-outs at the original Ship’s Wheel on the boulevard. That and treading for clams certainly padded my 15-cent-a-week allowance. I remember once showing my mother the $1.50 I made. She couldn’t believe it. In high school I did what everybody did — scooped ice cream, babysat, and later got a job as an elevator operator at the old Baldwin Hotel in Beach Haven. At first, I was a waitress, which I hated and wasn’t very good at. So, after I dropped a tray and cried instead of cleaning up the mess, the owner gave me the 4 to 10 shift on the elevator. I loved it. I could read, chat with the guests, and when I got off at 10 o’clock I’d meet my friends and we could fool around for a couple of hours.”

You said you had a health scare as a youth. What was that about? “Between the 8th and 9th grades I was diagnosed with polio, which caused scoliosis of the spine, so my doctor pretty much ordered me to exercise and be as active as I could — to force my growing body into its original straightness — so I did. And it worked! I loved all sports, acrobatics, dancing. Lots of dancing! My Aunt Milly taught me some of the moves she’d learned when she studied with Martha Graham. By the time I graduated college my back was almost perfectly straight.”

But wait, we’re rushing ahead. You’re already in college? “I wanted to go to Whittier in California, but my parents said forget it, it was too far away. I graduated from Cedar Crest College in Allentown, Pennsylvania. English major, in 1954. And during those three summers I got a job selling advertising for The Beachcomber. My mother told me I should ask for $50 a week. So, I did, and I got it.” 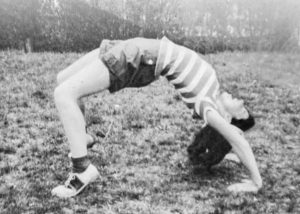 Unstoppable! Pooch, three years post-polio, showing off her back bend. 1949.

And soon after that you were offered the chance to buy the paper? “In March 1955 I married Bill Douglas who was the editor of the Beach Haven Times, and we became owners of the five-year-old Beachcomber. After Bill’s sudden death in ’57, I ran it for the next thirty-two years, before selling it to the owners of The Sandpaper, who kept me on as an editor for the next twenty years. I was lucky to have had such good writers in the beginning, who were only too happy to write for what I could afford.”

What about this house we’re sitting in? It’s the same cottage your parents brought you to in that basket, right? “Almost. Daddy’s uncle gave them a place to stay that first year, then they built this house in 1934 for $200. At first it was heated with a potbelly coal stove, with two bunks for my parents. The house was enlarged two years later when my brother was born. Some of the walls have been rearranged but it’s still all on one floor. My father thought we’d lose it in the hurricanes of ’38 and ’44 and we evacuated both times. After that, my mother wanted off the Island but, thank God, my father talked her out of it.”

Sitting in her airy living space with the bay just an arm’s length away it’s clear Pooch wouldn’t want to be anywhere else.

And what’s the last, funniest, most surprising thing she told me? “I never actually ate a clam until I was in my thirties,” she hoots. “One Saturday night at the Barnegat Light Yacht Club they laid out all these beautiful clams on the half-shell to slurp with our cocktails. I had one and loved it. I’ve been eating clams ever since.”