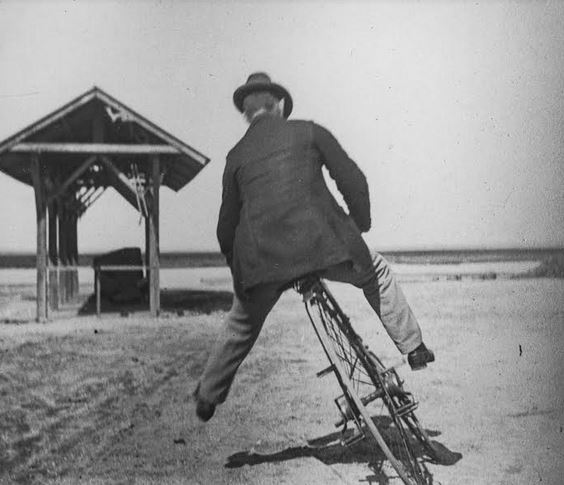 A rush of wind at your back. A flash of color whizzing by and growing smaller on the road ahead. A ringing bell from behind and a smiling couple side by side. These are the familiar sights and sounds of cycling on LBI, a tradition dating back to the first hard pack gravel roads and pavement.

The French pioneered these machines, called vélocipède, back in the 1860s. These crude — but familiar early contraptions evolved in the 1870s into penny-farthings, tall bicycles with a gigantic front wheel and a little seat on top of the rubberized, crank-operated mountain of wood or iron.

Neither variation was for the average man, woman, or child. Just getting onto the bike took practice and skill. Falls and headlong gainers over the wheels onto the hard pavement below were common.

A tinkerer named W. S. Kelley and a host of others in the United States and United Kingdom set out to revolutionize this niche sport into the everyday-for-everyman toy we all grew up with.

Initially they reversed the orientation of the bike, seating the operator facing the smaller steering wheel. Most importantly, later designs shrank the giant rear wheels and made both the same size, increasing stability, balance, and control. These bicycles in all their variations became known as “safety bicycles,” saving new generations from the headers of old.

One such early transitional design was the Pony Star bicycle by G.W. Pressey in 1880, a reverse penny-farthing model. And in a twist of Long Beach Island fate, it was manufactured by the H.B. Smith Machine Company in Smithville, New Jersey. From there, they left the factory and traveled around the world. One such place was our own Beach Haven.

Like many others, the fellow in these undated photographs, taken at Beach Haven, did his best just to get onto the thing. Another design quirk of the unique Pony Star was the use of leather and levers to move the wheels instead of chain and cranks. The large wheel at the back was operated by the rider stepping up and down on rocking metal levers mounted on the large rear wheel axle. When one got the hang of it, the leather spun the wheel hub on each side as it unfurled with each downward pump like the pull start on a lawn mower, then recoiled around the axle as the lever rocked upwards again.

The Pony Star lived a short but fascinating life. Safety bicycle design continued to evolve until, in short order, the modern bicycle was born, changing childhoods and the shoulders of the boulevard forever.