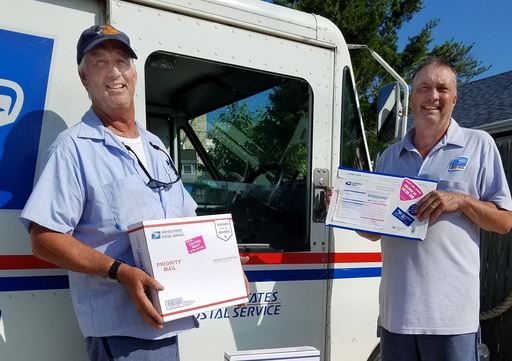 Meet Tom Logue. When Tom was ten years old, his parents purchased a home on Long Beach Island. As a year-round resident, Tom attended elementary school on the Island and then, Southern Regional High School where he was a member of the basketball team for four years. Currently, he lives with his wife and their four children in Manahawkin. Tom’s career with the U.S. Postal Service spans more than three decades.

As a youth, Tom had a newspaper route in Ship Bottom. He delivered newspapers to Bud Simmons, the owner of Simmons’ Bait and Tackle that was located on the circle in Ship Bottom. Today, Tom delivers mail to Bud’s son, Mark Simmons in Harvey Cedars.

For Tom, each mailbox is a connection to its owner. “You get to know your customers and become aware of their routines,” said Tom. Two years ago, on his Loveladies route, Tom noticed the mail was not being taken in by an eighty-six year old resident. Concerned, Tom knocked on the door. Although it appeared someone was home, there was no response. Looking around, Tom found the elderly gentleman unconscious and called 911. His actions saved the man’s life.

On Father’s Day in 2012, while at the beach, Tom was first to notice a young boy on a boogie board being swept out to sea. Suddenly, the child was engulfed by a large wave and disappeared. Tom ran into the water, swam out to where he had last seen the boy and dived under. He pulled the child up and struggled through the rip current to bring the boy safely to shore.

For his actions that day, Tom Logue was named the 2012 National Hero of the Year by the National Association of Letter Carriers. This commendation was established to pay public tribute to outstanding letter carriers who, despite danger to themselves, perform selfless and heroic acts to rescue those at risk of losing their lives. Tom was honored at a special luncheon in Washington, D.C.

According to Tom, mail carriers are frequently a GPS for summer visitors. He fondly recalls being flagged down many times by motorists for directions. One summer, people’s devices were misdirecting them to the north end of LBI for a Beach Haven wedding. “After the tenth request for help, I started waiving to anyone in a suit or party dress,” said Tom. “I asked if they were looking for the wedding.” Even smartphone apps aren’t that user-friendly.

Introducing James Harkness. James’ maternal grandparents were year-round Island residents since the 1950s. They ran Mr. T’s Mini Golf – Mehner’s Arcade. “When the mosquitoes woke-up, everyone called it The Blood Bank,” recalled James. His paternal grandparents bought a summer cottage here just before the March 1962 storm. “Growing up, I spent my summers on LBI,” said James.

Before becoming a mail carrier thirty years ago, while in his teens James was a lifeguard. During that time, he learned to surf, often catching waves when off duty. One Saturday, James noticed the four terrified children in the surf – holding hands and crying. Realizing they were trapped in a rip current James quickly grabbed his surf board and paddled the children to safety and back to their grateful father.

During a blizzard two winters ago, dangerous snowdrifts were everywhere. James noticed a woman, in a low-clearance vehicle, struggling unsuccessfully to get into the driveway of her Barnegat Avenue home. Using his mail truck, James pushed her vehicle into the driveway.

James, like Tom Logue, acts as a human GPS in the summertime. He helps visitors reach their destinations – if he can. “Frequently, people ask for directions to the gazebo,” he said with a widening smile. “There are several of them on the Island, from Barnegat Light to Beach Haven.”

James believes that small acts of kindness, a smile, a friendly wave, and a cheerful greeting are just as important as delivering the mail – especially for senior citizens living alone. Over the years, after work, James has been known to use some of his time-off to visit briefly with elderly residents on his route – like Mrs. Purvis of Surf City.

Last but not least, James notices things while making deliveries. Over the years, he’s notified authorities of open doors, broken windows, boats adrift, burst pipes and other emergencies; and he’s also contacted them when something seems not quite right. Naturally, the Surf City and Ship Bottom police departments are on James’ cell phone speed-dial.

So, the next time you see your mail carrier, remember all they do for everyone on their route –take a moment to say hello and thank them for their service.