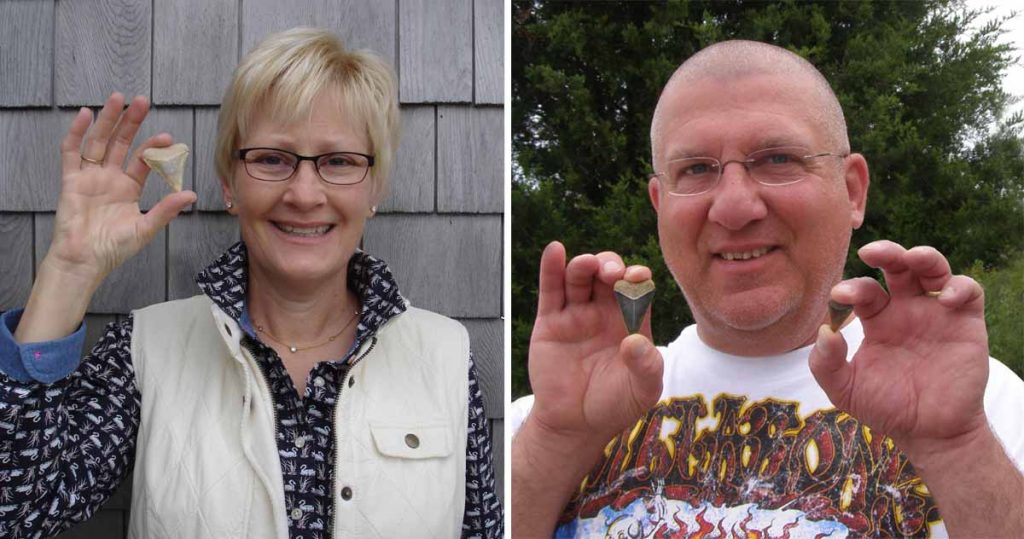 Keep your eyes peeled for prehistoric shark teeth. They may not be as common and easy to find as your favorite local shell, but they are out there to find if you know what you are looking for.

Scientists believe that sharks evolved about 390 million years ago. In that time, sharks have not changed too much. Sharks evolved cartilaginous skeletons, so they do not leave as much evidence of their long history on this earth. Shark teeth, however, fossilize very well because of hard enamel. Like modern sharks, prehistoric sharks were constantly replacing their teeth. Young sharks replace each tooth almost once a week, so over the millions of years, you can imagine the amount of prehistoric shark teeth are out there just waiting to be found.

A fossil shark tooth can be millions of years old, but it takes at least 10,000 years for a tooth to become an actual fossil. One way to tell it’s a fossil and not from a modern shark is the color. Fossil teeth can be black, dark gray, red, brown and even a mix of shades. A misconception is that all fossil shark teeth have to be black. The color may vary depending on the sediment the tooth was buried in for those many years. Modern teeth are bright white.

After the replenishment from Superstorm Sandy, many beachcombers began to find large fossil shark teeth along LBI’s beaches. The ones found in New Jersey are usually from prehistoric great whites, makes, bull sharks, porbeagles and goblin sharks. Teeth are often found in our rivers as well.

On of the most infamous prehistoric sharks was Megalodon (Carcharodon megalodon), the largest shark to have ever lived. It is believed to have been similar in appearance to a great white shark. Scientists learned how to calculate the length of an individual Megalodon by the size of it’s teeth. Most Megalodon teeth range between one to seven inches in length. They estimate the teeth on the larger end of the scale grew to up to sixty feet long. Their teeth were like arrow heads, perfectly designed to cut a chunk of meet out of a whale. Folklore once called the teeth “tongue stones” because they were believed to be the arrow tipped tongues of dragons. You are more likely to find a Megalodon tooth are found in the southern United States.

While you won’t find a fossilized shark’s tooth with every step on the beaches of LBI, they have been found in our area, and knowing what to look for will help in your treasure hunt. Next time you on the beach, take a closer look, you never know what you’ll find after the last tide.