By Carol Freas. Photography from the Kris Anderson Collection, courtesy of Karl Anderson

“Daddy! Daddy, can I come? I won’t get in the way!” pleaded five year old Kris Anderson. Before his father, Charlie, could say no, the largest man in the crew, John Christiansen, nicknamed Big Stiff, hoisted the boy into the 35-foot skiff and ordered, “Now you stay in that corner!”

With a nod from his stunned mother, Marge, the crew — all partners in the Crest Fishery in Beach Haven Terrace — pushed the wooden boat through the waves and clamored over the gunnels. John was the bowman, while Charlie, Henry Bordwick, brothers Tonnes and Ben Bohn manned the twelve-foot oars and rowed swiftly a half mile east toward the horizon to check their pounds — traps made of heavy rope designed to catch masses of fish. 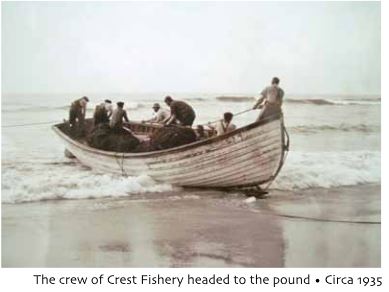 From the mid-19th through the mid-20th century a method of commercial fishing known as pound fishing, emulating traditional fishing methods of the Lenni Lenape on a much larger scale, was used off the shores of Long Beach Island. Besides the Crest Fishery, there was Barnegat City which used the north inlet to reach a dock on the bay.

When train service ended in the late 1930s, they opened the business on the circle in Ship Bottom. Surf City Fishery, on the Boulevard at 9th Street in Ship Bottom is still there. At the south end of the Island were Sun Fishery in the Holgate area and Beach Haven Fishery.

The pound fishermen drove hickory posts, delivered from North Carolina ranging in length from sixty to ninety feet into the ocean floor at intervals of thirty feet. Ropes were then strung horizontally above the waterline from pole to pole.

From those lines, more ropes were fastened to heavy chains resting on the bottom sand. Known as the weir, it would steer the huge schools of fish toward an enclosure of more poles and nets. This was the forebay which guided the fish into a net funnel and finally into to a forty-foot square net enclosure called the pound.

Each morning at daybreak, the fishermen arrived to pull up the full pound net. A man positioned fore and aft hauled the heavy net over the gunnel. Other men, using long handled dip nets, scooped the slippery catch into the hold. The empty net went back into the ocean. The skiff then headed to shore, oftentimes with as much as 15,000 pounds of fish. While returning to shore, the catch was loaded into tarred, flat woven baskets that held fifty pounds each. On the east side of the breakers, the men in the skiff waited for a set of six to eight waves to pass — known as picking a slat — using the power of the following wave to shoot across the sand bar. 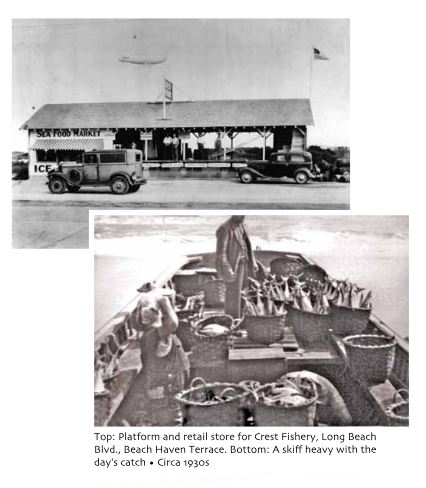 On shore, Clydesdale horses hitched to block and tackle pulled the boat ashore over heavy wood rollers beyond the high tideline. Next the fish were sorted, repacked with layers of ice in wood boxes and 200-pound barrels and sent by train to markets in Philadelphia and New York. Jovial workers would toss a fish to a kid on the beach who happily ran home with it for dinner. Depending on the season, the principal catch was whiting, mackerel, shad, flounder, weakfish, blue fish, kingfish, and large butterfish. The squid, moss bunker, and small butterfish were frozen and sold locally for bait, nothing went to waste. A good day could bring in two boat loads. A 1930 report lists 128 licensed fish pounds along the New Jersey coast, harvesting thirty-four million pounds of fish, and employing nearly six hundred men.

It was arduous work for these self-sufficient, sturdy Scandinavian men who established fisheries on LBI in 1916. The fishermen worked the pounds from late March to November with Sundays off. They lived in a bunkhouse near the beach and were paid $60 a month with room and board which included high calorie, hearty meals. The cook rattled pots and pans at 4:30 am, serving eggs, potatoes, meat, and bread with strong coffee. A huge dinner of fish, piles of chops, bread, and seasonal vegetables awaited at mid- day. There would be cold food for sandwiches left for the evening meal.

Ashore, the fishermen’s chores continued in the afternoon: resetting poles damaged by storms; cleaning and mending nets clogged with seaweed or torn by sharks; tarring baskets and new nets spread on the dune grass to dry. In the off hours, the men played as hard as they worked. They would meet their wives and locals to dance a shodish at Kubel’s or Han’s Bar with a ten-cent Schmidt’s beer in hand. Or sing their traditional drinking songs over a lager at the Hudson House, the Acme Bar or another favorite local watering hole. 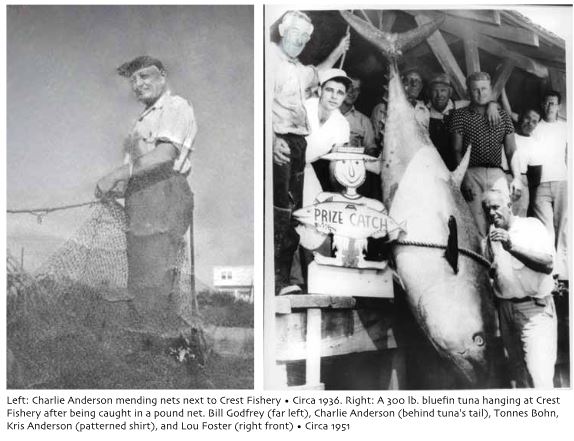 By the 1940s the monthly salary of a pound fisherman had grown to $200. Methods had also changed: Boats now used gasoline engines, the Clydesdales — replaced by tractors — went to pasture on the mainland, and the catch was transported to market by truck. A severe nor’easter in November 1935 destroyed the trestle bridge across Manahawkin Bay ending all train service. In 1914, a low, wooden trestle bridge for autos had opened.

The bridge was replaced with much fanfare in 1957 and again in 2016. After World War II, the huge schools of fish had dwindled. Many old timers contend bigger drag net boats damaged the ecosystem and hurt the industry. By 1950, only the Crest Fishery remained. Replacing worn equipment was scarce and expensive, so in 1956 the crew traded their nets for other tools. Kris’s dad, Charlie, continued to operate the Crest Fishery as a retail seafood store until the mid-1960s. Kris Anderson worked with his Dad’s crew through college, even during breaks in his job as a charter boat mate. He went on to teach in the special education department at Southern Regional High School, where he met and married Marge McKay, a home-economics teacher who had moved here from Maine. Before and after retirement, he traveled and fished many other waters but has always been deeply anchored here on LBI. His story is a unique part of the Island’s history. It is a story of people working as a team in harsh elements, building strength and trust to make our community a wonderful place to live.