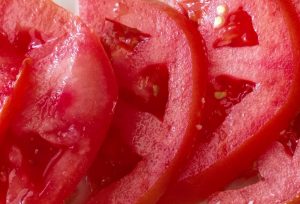 I would say there are few things greater, than a big fat juicy Jersey tomater.
You could search the kitchen for a better treat, but you’ll find nothing there that you’d rather eat.
Slices go nicely with lettuce and bacon, and don’t let the mayonnaise be forsaken,
Or drizzled with olive oil on fresh mozzarella. A sure fired way to make a happy fella.

They really are not so very hard to grow, Just break up some dirt with a shovel and hoe.
Stick in some plants that you bought from the store, but not ‘til Memorial Day, to be sure.
Fertilize often, no matter the cost, and cover at night if it threatens to frost.
As they grow taller, make sure they don’t break, by tying each one to an old wooden stake.

After they’ve grown for six hundred and seventy two hours, they’ll start to produce small yellow flowers.
And when they dry up and fall to the ground, you get little ‘maters tiny and round.
Soon they will grow, getting fatter and bigger. A miracle for sure, near as I can figger.
It’s now they’re discovered by wild critters, who, would eat your tomatoes, ‘cause they love ‘em too.

Deer like to nibble, and squirrels do as well, and giant green worms, I swear come from hell.
So, out come the sprayers of poisons and such, this way the marauders won’t like them so much.
Then in July, or August at least, If they’ve survived the caterpillars and beasts,
They’ll start to turn color before they ripen, until they get red, cause that’s how we like ‘em.

Be sure that the ripe ones are never forgotten. Pick ‘em before they get mushy and rotten.
But soon you will find, as you start to collect ‘em, Tomatoes will be stacked from your feet to your rectum.
Then up to your ears and over your head, you can’t eat ‘em all, it is sad to be said.
So it’s off to the neighbors with boxes and sacks, full of tomatoes you’ve been growing out back.

But now you are stuck, and don’t know what to do, for all of your neighbors’ been growin’ ‘em too.
So you get on the phone and start making some calls, in hopes you can give them away before fall.
Alas all your cousins and daughters and sons, also have ‘maters stacked up to their buns.
So in order not to take a huge loss, you gather them up and start making sauce.

Then by October, you’ve had quite your fill, but you’ve got some left over on the old window sill.
That’s when you start making up weird creations like tomatoes stuffed with zucchini and raisins.
And then, Saints be praised, when the last one is gone, the vines all collapsed and splayed on the lawn,
I take a deep breath, for I’ve had quite enough. I think I shall try to eat some other stuff.

Then when November’s cold zephyr blows, getting ready for this season’s white winter snows,
I smile to myself, for it is quite clear; I can’t wait for Jersey tomatoes next year.