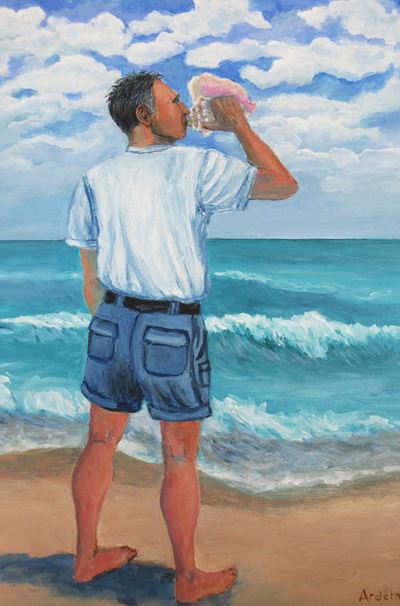 Artwork and story by Ardeth Schuyler

When I was in school to become an art teacher, one of my instructors told the class something that stayed with me for years: “Remember that you are teachers, not artists.” Teachers were practical people who wanted a career. Artists were people who needed to create, regardless of the obstacles.

I spent the next few years studying drawing, painting, sculpture, and printmaking, but did not consider myself to be an artist. After completing a bachelor’s degree in art education from Buffalo State College, I earned a master’s degree from New York University, got married, and had two children.

Originally, I planned to return to work after my children were born. However, since the age of fifteen, I had been living with rheumatoid arthritis, a disease that makes joints — especially those in the hands and feet — swollen and painful. My joint damage progressed to the point that I could not go back to standing in front of a classroom of students all day. I missed teaching, so I began teaching private art classes and after-school workshops.

My artwork also required adjustments. In college, I had been able to carve figures in wood and limestone. Because of the pain in my hands, I switched to carving blocks of clay. As for painting, I moved from large canvasses to smaller ones.

When my husband and I bought our summer house in Loveladies more than 20 years ago, I began to attend figure drawing classes at the Long Beach Island Foundation of the Arts and Sciences. Many of my classmates were professional artists who showed their work in galleries. One day, a fellow student looked at my drawings and asked if I had any shows coming up. When I explained that I did not show my work — after all, I was not really an artist — she looked confused. “What do you mean, you’re not an artist?” she asked. “Of course, you are!” She put me in touch with the director of a library gallery and soon I had my first solo show. That is when I began to see myself as an artist.

Since then, I have had eight more solo shows at various library galleries near my home in Westchester County, New  York. Each of my shows had a theme inspired by my interest in wildlife and conservation. Let Nature Sing featured paintings of endangered animals in the United States. Spirits of Freedom showed the wild mustangs that are being  slaughtered in the American Southwest. Wild Africa depicted elephants, rhinos, giraffes, and other vulnerable animals. In addition, five of my paintings have received blue ribbons in shows at the Long Beach Island Foundation.

I continued painting despite my health challenges, which included five surgeries to replace failing joints. But in 2018, my health worsened dramatically. I had severe back pain, numbness in my hands and feet, and weakness that led to several falls. I visited more than a dozen doctors, made several trips to emergency departments, and spent three days in the hospital where the numbness and weakness worsened. The hospital discharged me to a rehab facility to regain my strength, but instead I lost the ability to walk and stand. I even lost the use my hands.

After two weeks at the rehab facility, my husband took me to a doctor’s appointment that had been scheduled more than a month earlier. This doctor quickly realized what the others had missed: I was experiencing a rare complication of rheumatoid arthritis that caused weakness and paralysis. The good news was that the condition could be halted. The bad news was that much of the damage that had occurred would be permanent. I would likely never use my hands again.

That was two years ago. Since then, with physical therapy, I have made slow but steady progress. I learned to stand for a few seconds, then walk with an elevated walker, and then take steps without a walker. My hands are still largely paralyzed. But with a brush strapped to my hand, I was able to start doing watercolors and acrylic paintings again. My physical therapy continues to this day.

Currently, I am preparing new works for my next art show, Fantasy and Abstract which features whimsical mythological creatures and unreal landscapes. Painting is more important to me than ever, it is my escape from my physical limitations. I am glad to be an artist.