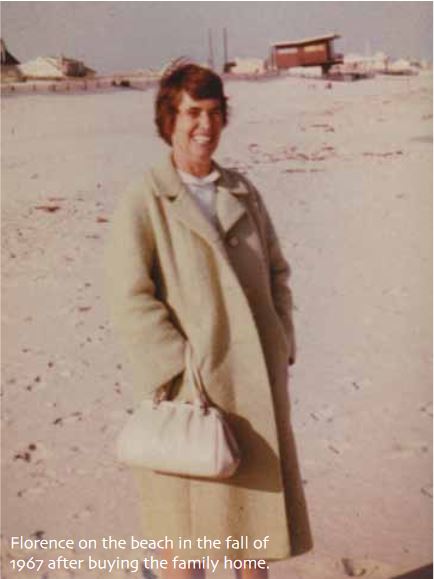 Florence Eves never imagined she’d spend more than a week at the shore. “We came across the old wooden bridge and couldn’t go to the beach because it was being patrolled by soldiers on horseback,” said Florence about one of her first memories of LBI in 1943 during WWII.

During the 1960s, Florence, her husband Herb and their three daughters, Barbara, Linda and Sue, rented homes in Brant Beach. The rent was $165 for the entire month and was raised after the second year by $10.

In 1962, Herb’s father had been given a free week at the shore from his boss who had inherited an old Victorian in North Beach Haven. The family spent the week and endured two bad thunderstorms, a leaky roof and rattling shutters. The two older daughters nicknamed the house as the “ghost house.” While driving back to Pennsylvania, Florence said, “The shore was a nice place to vacation but, “Who could spend more than a week at the shore?”

In 1967, the family decided to look for a home on LBI to call their own. Herb had many fond memories of summers spent here and wanted his three daughters to make LBI memories of their own. They purchased their home in Beach Haven Park in 1967 for $25,000. They’d come down almost every weekend in the winter. When school was out, Florence would pack up the car and she and the girls would spend the entire summer here, not returning until the start of school.

Florence remembers the winters down here being extremely quiet. You could cross the Boulevard without even looking. The speed limit was 50 mph and there weren’t any traffic lights working during the winter. Hands Department Store, Koseff’s Hardware, The Colonial Movie Theater, Morrison’s Restaurant and Wida’s Restaurant were pretty much the only places open. She also recalls the Boy Scout Camp on the beach, horseback riding on the beach, their neighbor who was the iceman selling ice for the iceboxes. The iceman was Al Eckert the Featherweight Boxing Champion who worked for the Brant Beach Ice Co. (see story about Al Eckert on page 54 in the 2013 Holiday issue of Echoes of LBI). The Causeway ended on Bay Ave. and there was a Drive-In movie in Manahawkin where Kohl’s and The Home Depot stand today. 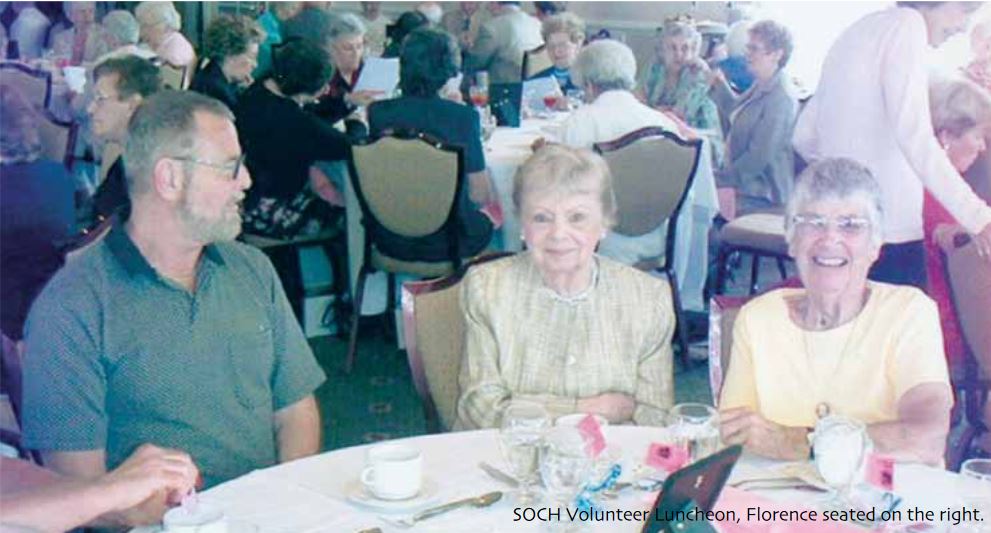 Until 1972 the nearest hospital was in Toms River. When Southern Ocean Medical Center opened it was a welcomed addition to the shore community. Florence, Herb and youngest daughter Sue Eves moved to Beach Haven Park full time in 1987. That’s when Florence began volunteering at the hospital in the Gift Shop and the Transportation Department, and continued to do so until May of 2014. At the age of 92 and after 27 years of service, her daughters threw a party in her honor at their home in Beach Haven Park in her honor.

Since Florence’s first trip to LBI during WWII, she has seen so many changes to LBI throughout the years. The charm of the small beach cottages is steadily disappearing. There are many more people and Manahawkin has grown into a thriving community. She still loves the slow pace of the Island, especially off-season.