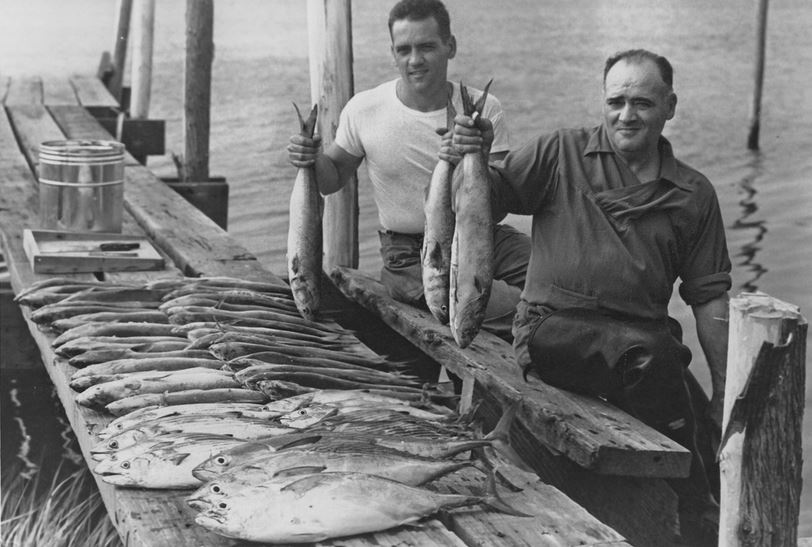 Frederic A. Priff with his father Frederic C. Priff and their catch, 1954

“My parents beach and fishing supply store, Davy Jones’ Locker was on the corner of Long Beach Boulevard and 6th Street in Ship Bottom where The Greenhouse Café is located today,” said Nancy Priff. “My brother Dan and I lived with our parents Fred and Diana Priff in an apartment over the store.” Later the family moved, making 218 West 11th Street in Ship Bottom their home. 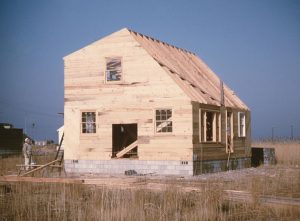 Davy Jones’ Locker was open from May thru September. “We sold a variety of things from boat parts and bloodworms to suntan lotion and little animals made out of sea shells,” explained Nancy. “We rented rafts, chairs and beach umbrellas, too.” As a teen, during the summer, Nancy worked part-time in the family’s store. She laughed as she recalled her approach to retrieving bloodworms from the coolers for customers. “I wore gloves.”

Frequently after work she enjoyed a frozen custard next-door at Gib-son’s Drive-In. Schultz, the family dachshund was also a regular at the custard stand. Over enthusiastic and forgetful of his manners, Schultz earned an unfortunate reputation. “On a hot day, he would knock the custard right out of a child’s hands…lapping it up the moment it hit the ground,” recalled Dan. Years later, when the family evacuated LBI for the storm of 1962, Schultz, and his reputation went along to stay at the home of their grandparents – where he was soon found guilty of stealing and devouring a leg of lamb from the kitchen table.

Through her teenage years in addition to working at the family store, Nancy worked at Captain John’s hot pretzel stand and the Amoco Gas Station on 18th Street and Long Beach Boulevard which was owned by Sara and Harry Holt. Nancy is proof that contrary to popular belief at least one girl from New Jersey has pumped gas. Later, she worked for the Beach Haven Times while attending college.

Dan remembers playing miniature golf next door and jumping on the trampolines at Tumble Town in Surf City. He also recalled when the entire 4th grade class at Ship Bottom Elementary School was assembled on the playground to see history in the making as a nuclear reactor was transported by barge on the bay. They watched in awe as it floated right past the school on its journey to the power plant. 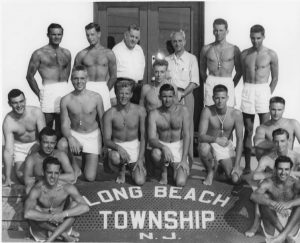 As a teenager, Dan clammed during the summer and worked for Ship Bottom checking beach badges. He also worked for both commercial and party boats out of Barnegat Light.

Nancy and Dan are third generation Islanders. In the 1930s, their grandparents Fred and Madeline Priff moved to North Beach on LBI. Fred was a machinist for American Can and Bowing. Madeline was a member of the Southern Ocean County Hospital Ladies Auxiliary. A talented seamstress and quilter, she donated many of her creations to hospital fundraisers. “Our grandmother’s bed was always covered with her sewing projects,” recalled Nancy.

Nancy and Dan’s father, Fred Priff was a member of the Seton Hall Diving Team and a lifeguard for many summers in Ship Bottom. During his career as a teacher Fred taught elementary school in Lacey Township, Bayville, Waretown, and on LBI. The elementary school in Ware-town is named Frederic A. Priff Elementary School in his honor. Their mother, Diana Priff was a secretary for the Ship Bottom Elementary School, and receptionist and assistant borough clerk for the municipality of Ship Bottom.

In the summer months Fred worked on a deep-sea fishing charter boat owned by Axel Jacobsen. Coincidentally, Axel was the husband of Ethel Jacobson for whom the Ethel Jacobson Elementary School in Surf City is named. 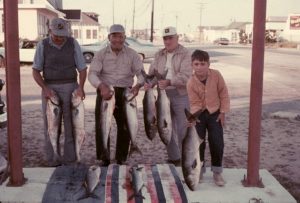 Growing up on LBI Dan and Nancy enjoyed the everyday summer routine of being on the beach and swimming in the ocean. She and Dan recall playing for hours on the wrecks of a pound boat and capsized sailboat on the Ship Bottom beach at 11th Street. “We rode our bikes everywhere,” said Nancy. There were excursions to Barnegat Light, adventures at The Point, and trips to Island Record Shop. Frequently on summer nights, the family piled into the sta-tion wagon and headed to the Manahawkin drive-in movie for the triple features where they watched horror classics like Hitchcock’s The Birds; and drive-in science fiction favorites like The Beast with Five Fingers, and The Blob starring Steve McQueen.

When Davy Jones’ Locker closed for the off-season, the store sup-plies were moved aside to make room for the pool table. Over the years, countless hours of pool were played. An avid woodworker, Fred was known to have built a camper and a kayak in the garage while waiting for summer. The off-season also brought the annual LBI Halloween Night Parade and the Christmas Tree Lighting at the Causeway circle. Each season brought something special. Though winter seemed long, in no time it would be Memorial Day, school would be out, and once again it would be summer.

For Nancy and Dan — their memories of LBI are eighteen miles long and as deep as the ocean.