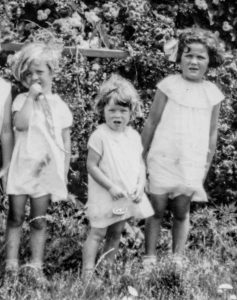 What I miss the most about my friend Anna Lisa Olsen Ray are her smiling face, the joy in her voice, and the spark of spirit in her eyes. You’d never know she was known for being shy or shuddered at the thought of speaking at the Barnegat Light Museum one year about her life growing up in Barnegat Light. I have known precious few people as confident and true to oneself as Anna Lisa. It’s said of many fine people, and it was no less true in her case, that her smile and her aura could light up a room. When she passed in April 2021 the Island community was diminished, but also remains so much richer and fortunate for having counted among its many blessed family members Anna Lisa Olsen Ray.

Though she lived an active life full of adventures and generations of family, seventeen-year-old Barnegat High School senior Anna Lisa Olsen had all those possibilities still ahead. Her young life up to that point set the stage for the lady she was becoming. In her own words, she outlined that life in progress for a school project, excerpts of which are affectionately shared here with her lasting permission.

Pure Norwegian stock! Back to the Vikings! For that’s where you would have to go if you wanted to trace my family’s ancestry. My mother’s parents immigrated from that long stretch of cold, but very beautiful, snow-covered, fjord-famous country of Norway, when they were still quite young, to live in the good old U.S.A. My father’s family remained in Norway, and he was the only one to venture forth to a distant land across the ocean. 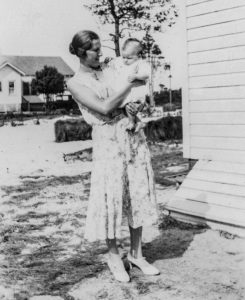 Evelyn Margrethe Iverson Hoff Olsen, my mother, was born in Brooklyn, New York, but has spent practically all of her days in Barnegat City, New Jersey. Like her daughters, she received her education in the little, one-room schoolhouse in Barnegat City and in Barnegat High School (now the grammar school). During her girlhood she used to help her mother maintain the “Signal House,” a boarding house for the Scandinavian fishermen of Barnegat City. One of the fishermen who boarded there, Otto Olsen, was destined to play an important part in her life. When she was sixteen years old and still a senior in high school, she began her business career — bookkeeper for the Independent Fish Company of Barnegat City. A year after her graduation from high school, she married Otto Olsen. She retained her position with the fish company for fourteen and a half years and then resigned, so that she could devote more time to her family. 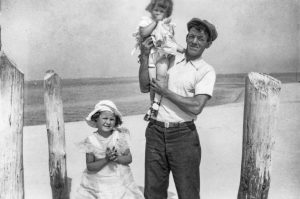 My father, Otto Olsen, was born in Norway. During his youth he worked on his father’s farm. When he was fourteen years old, he joined the Norwegian Merchant Marine, as was the custom of most Norwegian boys. He sailed the seven seas, seeing many foreign countries, until he was nineteen and then settled, first in Brooklyn, and later in Barnegat City, where he continued his sea-faring life as a commercial fisherman. As I have already mentioned, he met my mother while boarding at my grandmother’s house and married her soon after her graduation.

Two weeks after my birth in Smithtown Branch, I went on my first trip with my mother and father to Brooklyn. On March 2, 1931, I, dressed in a long white lace dress, which had been previously worn by my aunt and my mother, was christened in my great aunt’s house in Brooklyn. A Norwegian Lutheran pastor performed the ceremony. We still have the cut glass bowl, which held the water with which I was christened.

On February 15, 1932, I celebrated my first birthday. Promptly at three o’clock all the babies in the neighborhood arrived with their mothers. My grandmother had made a big birthday cake, and everyone ate cake, with, I suppose, the help of their mothers. I received many presents (some of which I still have) – a silver spoon, three real pearls, an elephant toy, five hundred pennies, a petticoat, a dress, and a red zipper suit.

Early in the spring of 1933, a few months before the birth of Sonja, we moved into the “big” house. (During my first two years we lived in a little bungalow.) Everyone liked the new house, and especially me, for now I had steps to climb! Edith Dalland’s family soon moved into our little bungalow, which is in the same yard as our big house.

During the two weeks before school opened, I could think of nothing else but my first day of school. I awoke bright and early that morning and then my mother dressed me in my new navy-blue dress with the sailor collar. I skipped merrily down the street to school with my playmates. Surely no one was more enthused or happy than I was as I entered the school for the first time. I gazed with awe at the interior of the little, one-room schoolhouse. There were five rows of desks, ranging from small desks for the tiny tots to larger desks for the fifth and sixth graders. The teacher’s desk was in the front of the room near the drinking fountain. All along the walls were big blackboards. In the back of the room was the coal stove, the piano, and two bookcases. On one side of the room was a sand box. Mrs. Gant, the teacher, used to call me her grandchild because she had also taught my mother. Mrs. Gant was kind and very helpful, but she could also be very strict, as the boys soon found out. 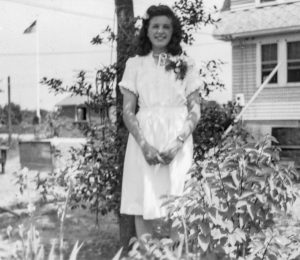 The annual Christmas party at the Beach Haven movie house was an event which was greatly anticipated by us when we were in Barnegat City school. One year two people were selected from the school to speak and sing on the radio during the party. I was chosen to saw a few lines (was I scared!) about the Christmas party and Louise Dickerson was chosen to sing a song.

Beach parties filled our social life in the summer of ’47. One day Edith, Ann, Sonja, and I decided that it would be great fun to have a beach party that night. So, we proceeded to make sandwiches and get soda. We called up the fellows and told them about our plans. They agreed whole-heartedly and promised to bring their lift raft. About 6:00 p.m. the skies began to get very dark, and the distant roar of thunder could be heard. Our good spirits began to dampen a little but, in spite of all this, we went down to the beach and gathered enough wood for a good fire. Then we went for a swim. The ocean was very calm, and we thoroughly enjoyed ourselves in the life raft. A little while later, a very weary gang of fellows and girls made their way up the beach to a blazing fire. By now the storm had blown out to sea and we were able to consume our food without the fear of rain. Even the portable radio which we had brought along began to work. What started off to be a very dismal evening turned out to be one of the most enjoyable I have ever spent. 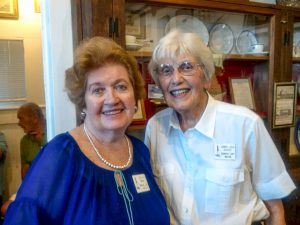 During my school years I have had quite a few subjects. I enjoyed the languages, mathematics, and the commercial subjects the most. Notebooks, term papers, and English compositions were my pet peeves. Also, during my years in school, I have met many teachers, all of whom I have liked and who have helped me very much. 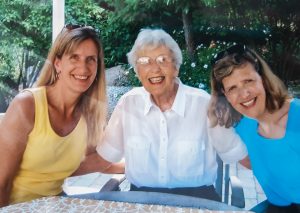 In September 1948, I am planning to go to college and take up business as a career. I am looking forward to college, but, somehow, I think that I will be sorry to leave my alma mater
– Barnegat High School.