Jayden Toledo (Jose) on his journey on a section of Stafford Road. Mariano Cayo photo

Ever since the shack succumbed to the bay waters after Superstorm Sandy, visitors to LBI have searched for another building that might welcome them to the Island and provide them with good feelings as they depart. Anyone who was lucky enough to be in the audience at the tenth annual Lighthouse International Film Festival, who saw the film short, Loser Leaves Town may well have found that new happy place.

The Lighthouse International Film Festival took place June 7-10 on LBI. Eric Johnson, Executive Director of the festival, also produced and co-wrote Loser Leaves Town one of the most entertaining, yet engaging films of the event. Because of his position, the film itself could not be considered for any awards, but anyone who saw it experienced a multitude of emotions by the time the twelve-minute film ended. Directed and co-written by Mark Nickelsburg, this short film contained everything a longer film would strive for, including characters who tugged at the heartstrings, scenery that evoked strong emotions, and imaginative yet action packed glimpses into a world of excitement and power.

Although the film itself focused on themes of isolation with each character isolated in his or her own way, the dynamic between the two young characters is the central story line of the movie. Eleven-year old Jose played by Jayden Toledo, and his nemesis, a twelve-year old girl named Jamie portrayed by Delphina Belle, who later begins the journey Jose is forced to abandon, appear to live in cultural isolation.

Set in the bay area of Manahawkin, young Jose imagines himself a luchador, and conceals his mundane identity with a glimmering silver and cobalt blue mask and cape, ignoring the young girl who sits by the entrance to Lucille’s Candies. Inside, Jose snatches bags of candy from the shop owner to take home to his father, but the young girl runs after him, and forces him to spill the coveted gummy worms into the dirt of the marshes. Jose’s father Francisco, portrayed by actor Elliot Villar, carefully washes the candies one by one back at the house. Later during a tender laundry scene, the audience realizes the colorful dress Francisco folds probably belonged to a wife and mother who abandoned them. 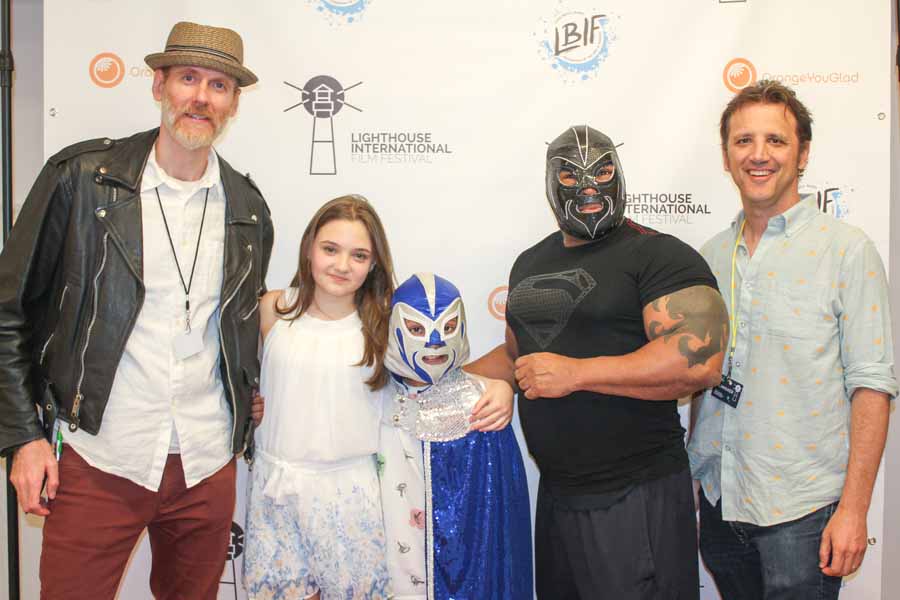 Many exciting scenes occur, as Jose imagines himself as not only any luchador, but one of the most famous professional wrestlers in the sport, El Valiente. In real life, this dynamic superstar is Bronco Internacional who has been in the business for thirty-five years and heads his own Bronx Wrestling Federation. Bronco Internacional was not only a pivotal presence in the movie, but also made a guest appearance at the Lighthouse International Film Festival itself, along with the young people, the father in the film, and writer Mike Nickelsburg. El Valiente’s superhero presence could be seen in action on the wrestling stage in Jose’s imagination, and at one point his domination of the scene was complete as it rained gummy worms to reflect his glorious victory.

In the final scenes, Jose goes back to Lucille’s to be challenged by Jamie to a commonly issued challenge in the wrestling world, “loser leaves town,” as they both take their fight to a marshy area by the dock of Barnegat Bay. The ending of the movie may surprise the audience, but the vision of those young people and the gummy worms which fell like confetti filling the arena will remain, as Lucille’s Candies offers glad tidings of island possibilities for years to come.