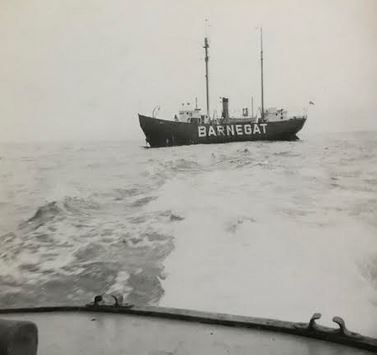 The Lightship Barnegat LV/79 was built by the New York Shipbuilding Company in Camden, New Jersey in 1904. The steel-hulled, 688-ton, steam propelled 130-foot ship was designed with two masts displaying a total of six oil-fueled lanterns, a steam-chime whistle that sounded every twenty seconds, a submarine bell, and later a radio beacon. From 1904 to 1924 the Lightship Barnegat was posted at Five Fathom Bank on the coast of New Jersey near Cape May. Destructive storms and erosion had been the death-knell of the Ol’ Barney lighthouse. In its place an offshore lightship was established in 1927. The Lightship Barnegat was assigned to the newly created Barnegat Station to warn ships of the hazards presented along the coast of New Jersey.

During World War II, LV/79 served as an examination vessel — intercepting and inspecting all ships seeking entry into the Delaware River. After the war, the Lightship Barnegat was returned to Barnegat Station. Until her decommissioning in 1967, vessels along the infamous New Jersey coast were guided by Light Vessel 79 – the Lightship Barnegat.

Lightships and their crews are the unsung heroes of the coastal sea. Tasked with warning other vessels of impending hazards, lightships rode at anchor through hurricanes and perilous conditions when all other ships sought safety. Considered the most dangerous of assignments, many lightship sailors lost their lives while protecting the lives of others.

Who were the brave men that served aboard the Lightship Barnegat?

In 1948, after graduating from Springfield Trade High School, Richard McBride enlisted in the U.S. Navy Reserves. At 17, McBride was under-age; the U.S. Navy required the permission of McBride’s mother for him to enlist. Six months later McBride transferred to the United States Coast Guard. After attending USCG boot camp in Cape May, New Jersey, he was briefly stationed aboard the Androscoggin, an ocean weather station vessel in the North Atlantic after which he was assigned to the Lightship Barnegat. While aboard the Lightship Barnegat McBride was promoted to Ensign. He served his country for four years and was honorably discharged. 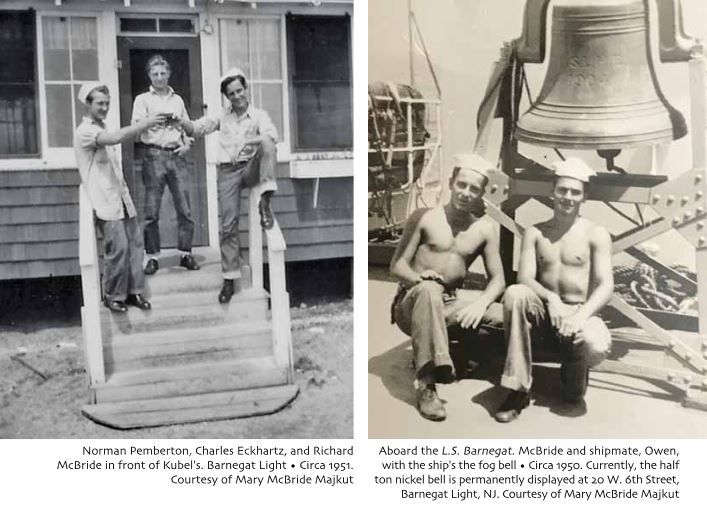 Throughout his life, McBride radiated the core values of the U.S. Coast Guard; honor, integrity, respect, compassion, devotion, and service to others. He chose a career as a lieutenant with the Springfield Fire Department, holding true to the U.S. Coast Guard’s motto, Semper Paratus, Always Ready. “During his thirty-five years with the fire department, my dad saw a lot,” said Ms. Majkut. “Making a difference in people’s lives gave him a deep sense of satisfaction.”

“He was kind and gentle,” said Ms. Majkut. “[A devoted and loving father] we could always count on my dad.”

Upon retirement, McBride studied art at the local college, won a bronze medal in the Senior Olympics for racquetball and volunteered at the Shriner’s Hospital in Springfield.

In his final months Richard McBride lived close to the sea, surrounded by loving family and salt air.

The search for those who served aboard the Lightship Barnegat continues. Please contact echoesoflbi@gmail.com