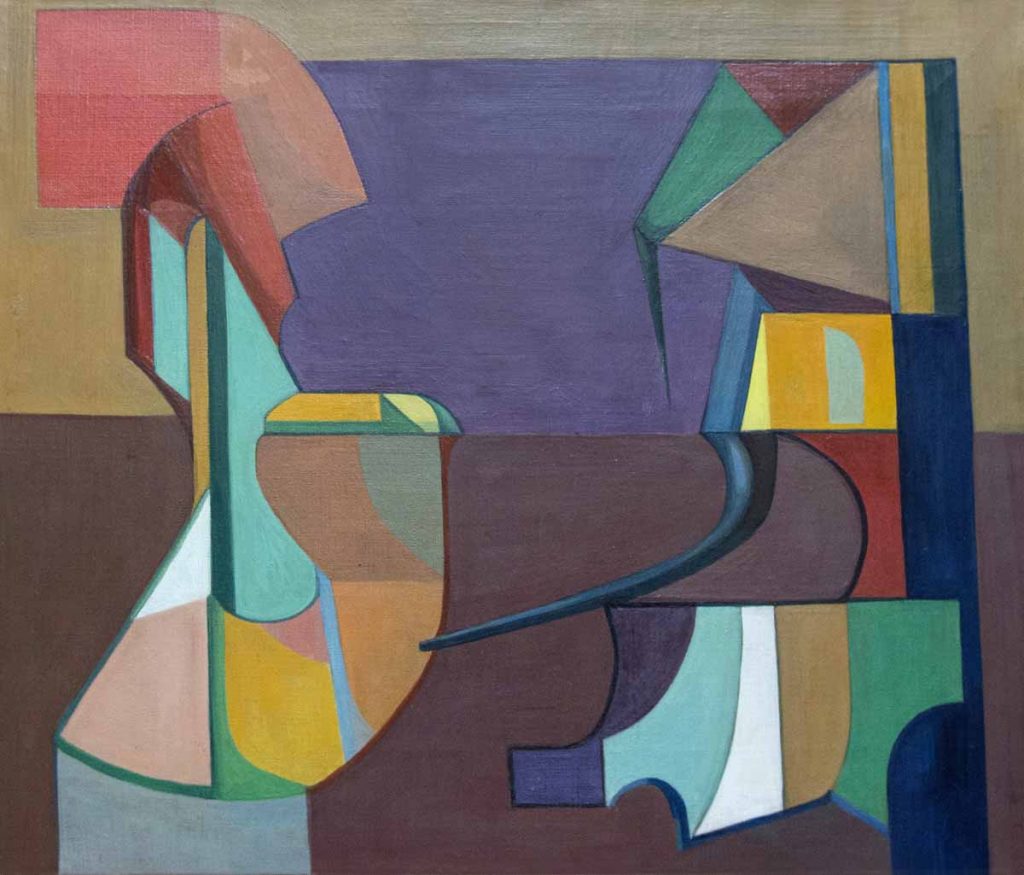 The Price Playing with the Princess, oil on canvas, 1943 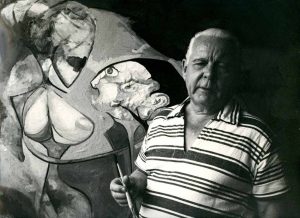 Last fall, I reconnected with a classmate after fifty-four years. We met in third grade at the Long Beach Island School in 1951. We lost contact when she later transferred to a Philadelphia boarding school. As a shy ten-year old girl and occasional dinner guest, I was unaware the father of my friend Paula Kelly, was a famous artist. My recollection was of a quiet man who spoke in gentle tones. Later I learned Leon Kelly was a renown Surrealist; an artist who deserted the main road of art to roam the enticing bypath of Surrealism.

Born in Philadelphia October 1901, Leon Kelly was not drawn to the family’s tailoring business. He preferred pencils over sewing needles. At his family’s farm in Bucks County, Pennsylvania, Kelly gravitated to drawing the natural world. It was a world that opened his eyes and in turn ignited his heart to see the spirit in all things. 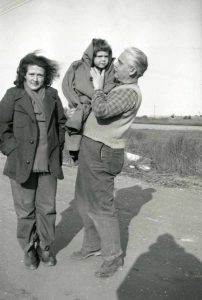 At thirteen, Kelly left public school to be tutored at home by Philadelphia artist Albert Jean Adolphe. Adolphe was a professor at the School of Industrial Art, today known as the University of the Arts. Under Adolphe, Kelly studied the old masters, and worked plein air drawing animals at the Philadelphia Zoo.

The divorce of his parents left young Leon with the responsibility of supporting his mother and grandmother. Working the night shift at Feihofer Bakery, he persevered with his art during the day. Too young to enlist in World War I, Kelly worked loading ships at the Army Quartermaster Depot on the Delaware River. Finding artistic inspiration in everything, Kelly’s notebooks from this period are filled with ideas for weaponry and innovative ways to conceal buildings.

In 1922, Kelly studied with Modernist painter, Arthur Carles at the Pennsylvania Academy of Fine Art. Always curious and driven, he furthered his understanding of human anatomy for figurative paintings by dissecting a cadaver at the College of Osteopathy. As the recipient of the Cresson Traveling Fellowship, Kelly studied in England, Italy, and France the summer of 1925. It was an exciting and revolutionary era for musicians, writers, and artists. Inspired to be a part of immerging isms in Europe, Kelly returned to Paris. There he lived on a small stipend provided by his father from 1926 to 1930. Honing his craft, Kelly spent months in the Louvre working in the styles of the old masters. There he experimented with the techniques of Picasso, Diego Rivera, and Cezanne. Eventually, the world-wide financial crash made the starving artist life increasingly difficult and Kelly returned to the states with his new wife, Henriette D’Enfurth. Finding it difficult to assimilate into life in America, after several years Henriette ended the marriage and returned to France. Determined to make a living as an artist, Kelly remained in Philadelphia.

In 1941 Kelly married Helen Lloyd, a painter and art teacher from Montclair, New Jersey. Helen’s cottage in the dunes at Harvey Cedars became their home. Their daughter Paula was born in 1943. The hurricane of 1944 brought ocean waters through the house. “My father was a non-swimmer,” said Paula speaking of their slog through flood waters to safety at the nearby fire house. “He rescued our cat as it floated by in a dresser drawer.” The storm-ravaged landscape necessitated the relocation of the damaged cottage. Placed on rollers, it was moved to its present location on Maiden Lane and 80th Street. Enough materials were salvaged from storm wreckage to build a small guest house and separate studio for Kelly. There in his small family compound, Kelly found the quiet solitude needed to develop his distinctive style of abstraction. 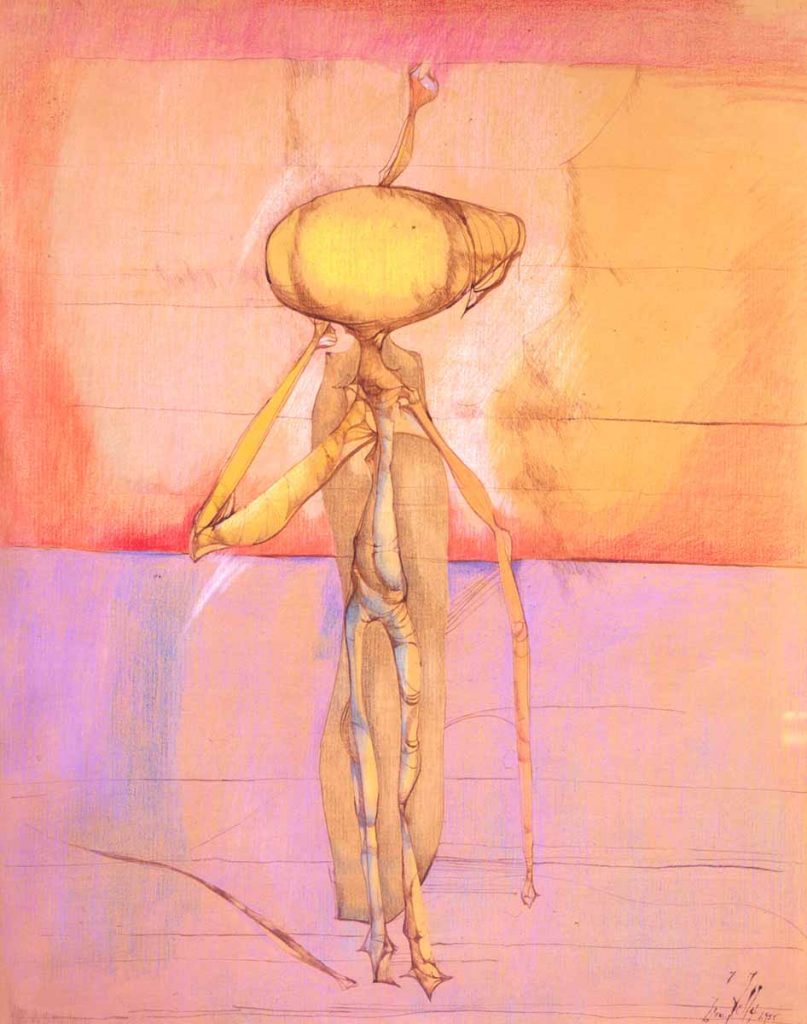 Julien Levy, an ardent supporter of Surrealism, operated a gallery in New York City from 1932 to 1949 which showcased works by major European artists such as Dali, Duchamp, Ernst, and Magritte. Leon Kelly was among American artists influenced by the trend whose works were also exhibited.

Encouraged by Levy, Kelly ventured more deeply into fantasy, manifesting elements of the natural world surrounding him on LBI into imaginary creatures of enormous scale on his canvas. A recurring theme was the mosquito, with whom Islanders of the 1940s were well acquainted. Other insects of the Harvey Cedars garden were also integrated into his compositions from this period.

Kelly’s work revealed an unparalleled level of draftsmanship. Drawing on imagery from the subconscious and dreams, juxtaposing unlikely elements into Surrealistic compositions that are startling, irrational and symbolic; Kelly’s work points to a man able to visualize and illustrate things beyond the norm.

In the late 1940s he sought to move away from European influence to find a truly American expression, one rooted in the visual traditions of the Americas. He found fertile ground in native American culture and Peruvian textiles. 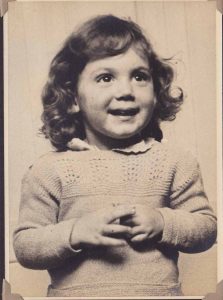 “My father’s work reflected the elements of living on the island along with attitudes toward nature gleaned from travel in New Mexico,” Paula once wrote. “The rain, sun, moon, beach, birds, insects, and wind all began to emerge in his work. The quiet, with few people around us, was soon filled to overflowing with the dramas and images of the natural world. The wind took on a persona, the grasses of the dunes, and migrating birds animated and energized the landscape. He spoke of not being able to paint a tree or mosquito until he could perceive its soul.”

In a personal letter to Levy, Kelly wrote “I believe I have a strong shot of the chemical that makes hermits and monks. But I wish that I did not, for I am torn within by a tenderness and compassion for fellow man in general. The happiness of others is a great joy to me.” During these years Kelly’s curiosity and thirst for knowledge led to travel abroad. Investigation of different cultures and current events was evident in his Surrealist compositions of alien figures. By following his muse, critics and dealers were often at a loss to describe Kelly’s work. Labeled a Surrealist, throughout the 1950s until his death in 1982, Kelly pursued his own ideas and resisted pressure from art dealers and critics to be confined to one style.

The Whitney Museum of American Art, The Metropolitan Museum of Art, and The Museum of Modern Art include works by Kelly as does the Print and Drawing Collection at the Boston Public Library. Kelly’s work has been featured in special exhibits at the Long Beach Island Foundation of the Arts and Sciences and the Sidney Rothman Gallery in Barnegat Light. Over the years, Kelly taught at the Brooklyn Museum, Philadelphia Museum of Art, University of Wyoming and continued to paint for scheduled group and solo shows.

Having the opportunity to know Leon Kelly now through his daughter, I regret having missed the opportunity to study and paint with this exceptional man. But, the energy and spirit of nature that Kelly experienced still surrounds us. Breathe it in. Let it carry your thoughts. It is here that we can find inspiration. Perhaps a Surrealist awaits release.