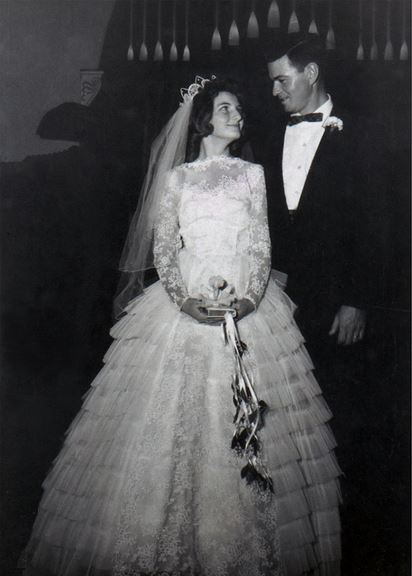 With tears and smiles she reminisced about how she met her late husband David. One night, Pat did something out of the ordinary and attended youth group with a friend at the Presbyterian Church in Barnegat. “David was the leader of the youth group,” recalls Pat. “It was love at first sight.” Recalling the unusual way The Tuckerton Beacon titled their engagement announcement Pat said, “It was big news. The heading read “Barnegat Girl to be Married to Island Guy.”

It was big news in those days because it was unusual that Pat and David ever met. David was from the Island – Ship Bottom. Pat was from the mainland – Barnegat. Like many towns in those days, Barnegat and LBI were dotted with small churches, local grocery stores, movie theaters and neighborhood schools. Generally, young people didn’t need to travel far from their own town for daily life. Teens from the Island and mainland frequently never met until they attended high school together in Barnegat. Somehow, David had decided to be involved in a church on the mainland in Barnegat. If he hadn’t, Pat and David may have never met. On December 6, 1958, Pat and David were married in the Methodist Church in Barnegat. It was a marriage that lasted fifty-four years.

Pat was born in 1940 to Winston Newman Sr. and Mary Thompson Newman. For Winston, making a living as a clammer was hard. To help pay for school clothes and other necessities, at eight years-old Pat worked in Chatsworth picking blueberries. It was a job she did for many summers. “Around 1955, my Dad began dragging for scallops in the bay,” recalled Pat. Eventually, Winston built a scallop house. “I worked long hard hours there to save for my wedding,” said Pat. A plaque in the Tuckerton Seaport and Baymen’s Museum bears the name of Pat’s dad.

David Jr. was born in 1931. David’s parents, David Sr. and Anna Vance Wark lived on 21st Street in Ship Bottom. “While David’s parents were away getting married, locals decorated their house with ribbons, bows, signs and congratulation wishes,” recalls Pat. David Jr. and his sister Darlene grew up in the house on 21st Street. David Sr. was a carpenter by trade. Anna was a tax collector for Ship Bottom. “David’s mom bought their land and the land across the street for $500.00 each,” says Pat. “David Jr. built a house on part of it in 1956.” Pat and David Jr. made their home and raised their four children, David III, Kevin, Michael, and Lisa in the house on 21st Street. All their children still live locally. The family now includes eight grandchildren and two great grandchildren. 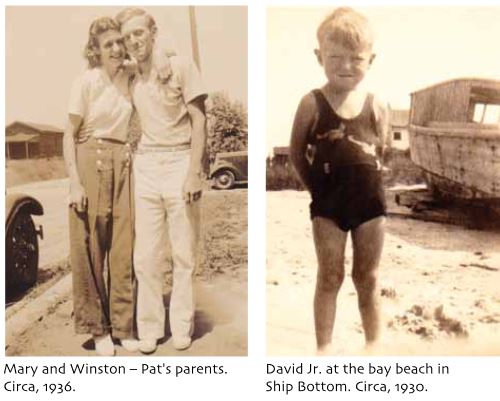 David Jr. was an avid fisherman, clammer and crabber. “When each of our sons turned twelve-years-old, David Jr. bought them a rowboat,” said Pat. His passion was passed on to Kevin and Michael. “Both of them are commercial fisherman,” Pat said proudly. Their son David III tried his hand in the sea food industry at an early age. “When he was just a boy he decided to start his own crab business. He caught crabs, brought them home, cleaned and cook them. Then he sold them for $3 a dozen,” said Pat. “He saved the money and put it toward his first car.” Pat went on to talk about their daughter Lisa. “She has a true passion for the beach and ocean. Lisa was a huge help to me when I ran our appliance business.”

For years, David Jr. was an electrician and worked for a builder in Harvey Cedars. In 1967 he started Dave’s Appliances. “He just came home one day and announced his plans,” said Pat. “I ran the business for over twenty-five years while David did all the repairs.” The store was located in Beach Haven on the corner of Bay Avenue and Amber Street. “We were proud of our customer service and we were never open on Sundays,” said Pat with a smile. Today, the building is owned by their son Kevin.

David Jr. was proud to be a member of the Ship Bottom Volunteer Fire Department, and for a while he served as Fire Chief. During the infamous March 1962 nor’easter, a house was swept into the bay with the family trapped inside. “The family was in the floating house in the only room that hadn’t taken on water,” recalls Pat. “David Jr. and his crew rescued the entire family by boat.” 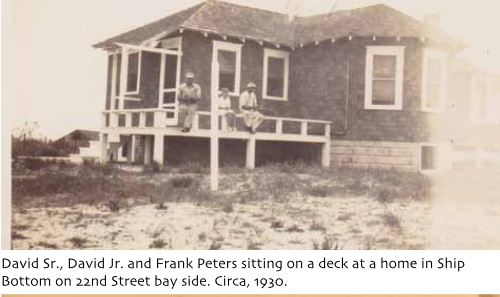 David Jr. was also a janitor for the Union Church in Ship Bottom, He helped to build the addition when the church expanded. Pat and David Jr. also helped to start their church – Anchor Christian Fellowship in West Creek. The only thing David Jr. loved more than a good story was sharing it with family and friends. Pat went on to tell one of his favorites. “Between 21st and 22st Streets in Ship Bottom there was a little sand beach where people who lived nearby kept their rowboats. Three men lived in a little shack near the rowboats. During the season, the men would rent out the rowboats for twenty-five cents even though the rowboats didn’t belong to them. The men would make a bit of money, and head over to The Port Hole for a drink. If any of their neighbors came for their own boat, while theirs was rented out, the men would tell them to just take one of the other rowboats. And they did. They’d just take someone else’s rowboat and go. No one ever complained or called the police. They didn’t mind. It was just the way it was.”

As a teenager during WWII, David and a neighbor George spent a lot of time on the beaches of LBI. One day George cut his foot badly when diving into the ocean. “They needed help right away,” said Pat. The driver of a Cox and Cox Ice Company truck gave the boys a ride to George’s house by the bay. When George’s mom couldn’t stop the bleeding, they knew he needed emergency medical attention. But without a car they had no way to get George to the first aid station in Brant Beach. At that time, the Coast Guard had set up a first aid station next door to Widas Restaurant, currently Daddy O’s. The only car in sight belonged to two women who were renting the house next to George’s house. Somehow, David and George got the car to run and they were off to the first aid station. As they drove down the street they saw the owners of the car. “The two women were walking down the street,” said Pat. “As they drove past them, the boys waved to them and the two women waved back. They didn’t realize the boys were driving their car.” Later, George’s mother explained the emergency to the owners of the car. “They were fine with everything,” mused Pat. 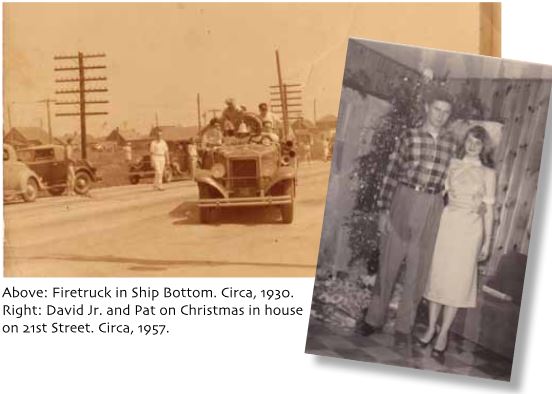 Most wedding gowns are worn once or twice, then packed away and forgotten. The beautiful wedding gown Pat had worked so hard to save enough money to purchase was worn twenty-three times. “David and I were married by Reverend Evyn Adams,” explained Pat. “He and his wife were missionaries on furlough from Japan.” Reverend Adams asked Pat if they could take her wedding gown to Japan when they returned. “He wanted to have my wedding gown for Japanese brides who were married in his church to wear for their weddings.”

“David taught me to drive in his 1957 Chevy,” Pat said smiling through tears. “Driving over the old wooden bridge for the first time was a free and easy feeling that’s still with me.” Today, driving over the bridge that connects LBI to the mainland always brings back special memories for Pat.

For Pat and David, the mainland and Island were connected then and forever by their love and the legacy of their life together.