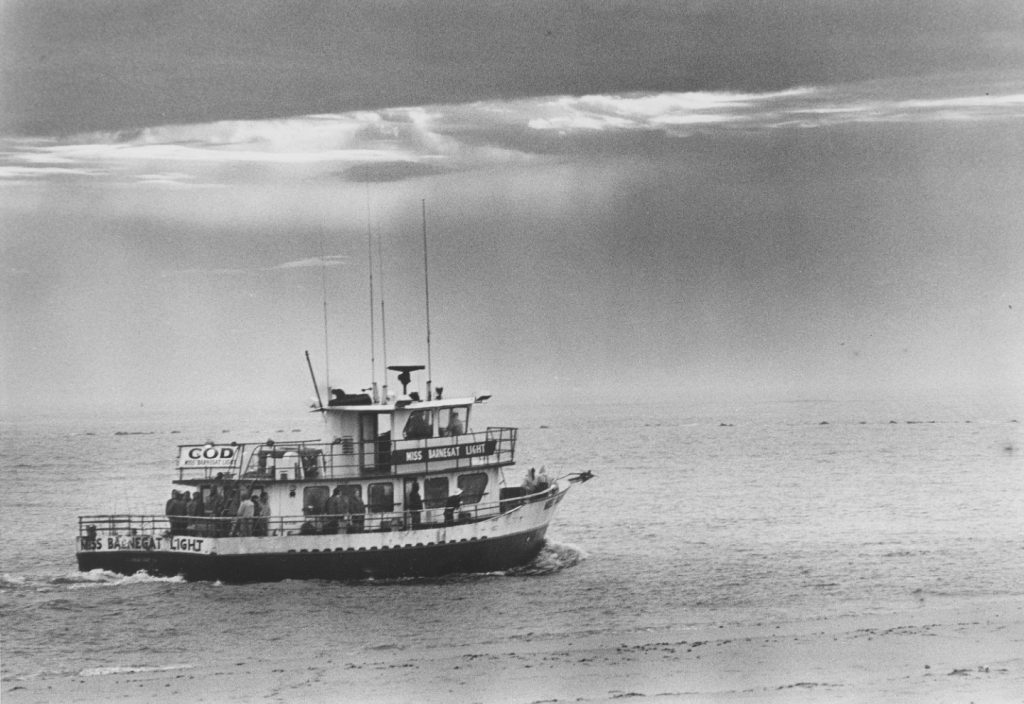 Thinking back on her life from her porch on a sunny spring day, Marion Oliver Larson can only smile and feel gratitude. “I was very lucky. I had a wonderful life.” She exudes the spirit of a life fulfilled though by no means finished. There’s a twinkle of humor and energy in those eyes. It’s the same spark that shone from the eyes of a young lady from Beach Haven who followed her gut and her heart and found adventures and a storybook romance. Looking back on those formative years, Marion laughed heartily and was still as giddy about her husband John as the first time their hearts touched when she was just a teenager head over heels for him.

The year was 1949. The setting was a high school auditorium. Tables and chairs were spread around the outside of the room. One table had cups and a punch bowl filled with a bright red, light refreshment. Colorful paper ribbons hung from here and there, while others draped from one side of the room to the other over everyone’s heads. There were dozens of young boys and girls. But aside from a few couples swaying with the music in the middle of the floor, most of the boys were huddled along one side of the room and the girls stayed on the other. Some of the wallflower boys were glued to the wall. Some were desperate to make their legs move toward the girl they’d had their eye on in class all year. Many of the girls just hoped someone, anyone, would come over and ask them to dance. The standoff dragged painfully on at the first dance for freshmen at Barnegat High School. Then one tall, dark, handsome boy strode across the floor and one girl’s heart fluttered as she jumped forward to meet him. The rest was history.

Born in 1934 in Beach Haven, Marion Oliver was the youngest of three sisters who would become well-known in Island circles as the Oliver Sisters. While her middle sister, Chloe, would be outgoing and popular from the get-go, Marion was shy. It made for a tough beginning when she started kindergarten at the Beach Haven School, which she would attend through eighth grade.

“I cried the first day of school!” Marion laughs. “I still remember sitting on the teacher’s lap and all the other kids around me staring at me crying.”

It didn’t get better at recess, either. “When out on the playground, the boys would chase the girls. And I would cry because these boys kept chasing me. They tried to kiss the girls!”

But, boy, would Marion come out of her shell. By third grade, she was already charging headlong into life and boys. “Even at that age,” she explained, “there were three boys in [her oldest sister Muriel’s] class that I was always hoping the teacher would have me take a note down to Miss Salmons’ — so I could have a look at these boys.”

Living close by in Beach Haven meant school was easy to get to. “I lived on Second Street and the school was on Eighth Street. And my sisters and I walked every day, six blocks, up to school in the morning, home for lunch, back to school after lunch,” and home again after school.

School, though, came home with her thanks to her mother, Muriel, who was a substitute teacher. That brought them together one year, a memory still funny but one that comes with a little shudder, too. “My worst year was fourth grade,” Marion teased. “Because guess who my teacher was? My mother!” Perhaps fortunately for Marion, her strict mother’s one-year tenure wouldn’t last. “Fourth grade boys get that idea they can tease the devil out of you. And she [Muriel] just couldn’t take it.”

In the way that life can be, the worlds of Marion and John Larson, Jr, a fisherman’s son from the other end of the Island, would cross for the first time the very next year. Maybe it lit a fuse in her heart she wasn’t aware of. Or maybe it was a just a chance encounter that neither were ready for just yet. Whatever the case, fate and a fire put these two children from different schools and opposite sides of the Tuckerton Railroad tracks in an auditorium together one fateful day. 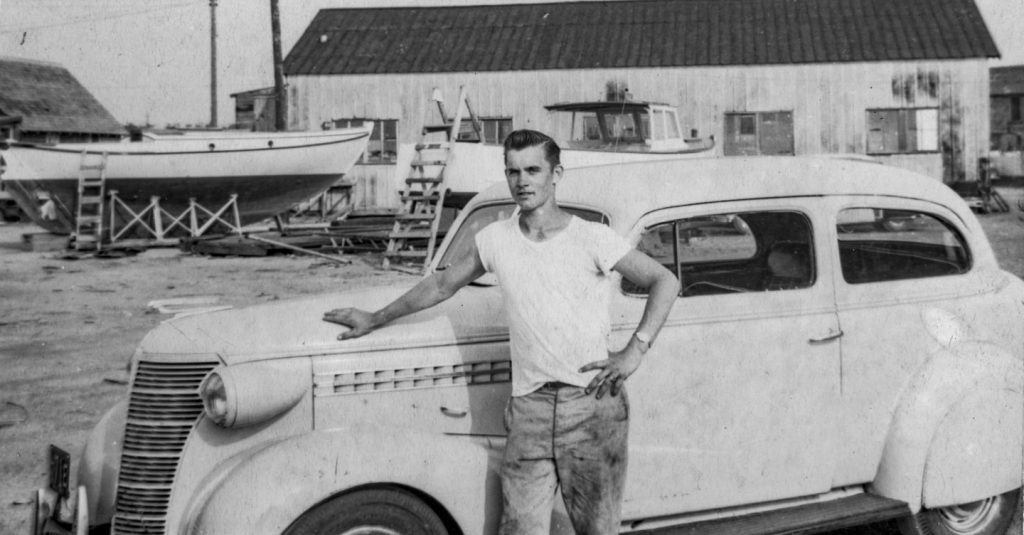 “The first time I saw my husband,” she said with a smile as the memories came flooding back, “I didn’t know he was going to be my husband; I was in fifth grade. There was this strange boy that most of us didn’t know.” At that time, little Johnny was in sixth grade at Barnegat Elementary School on the mainland. It had recently suffered a fire and was temporarily closed. With the day off, he came down to visit friends attending the Beach Haven School.

“Everybody looked, ‘Who’s that? Oh, that’s Johnny Larson, he’s from Barnegat.’” That brief glimpse of the boy she would marry was carved into her mind. “He had these dark eyebrows. He was very attractive.” A couple of years would pass before their lives crossed again and a life-long love affair would begin.

In between was a war she had thankfully little awareness of because of her parents’ protection and a hurricane that left indelible memories on her and everyone who lived in Beach Haven.

When this writer sat with Marion as she basked in the sun on the porch of her and John’s 19th century Barnegat Light cottage, the day the Great Atlantic Hurricane of 1944 blew past the Island was still fresh in her mind. “It was September 14,” she recalled exactly. The school was dismissed early that warm Thursday. By supper time, the wind was up, and the ocean was already coming down the streets.

“My mother happened to look out into the backyard,” Marion recounted, her eyes widening with amazement. “She said, ‘Oh, my goodness! A whole lot of water is in the backyard.’ So, we [kids] went and looked out the front and there goes some boardwalk, right by us. And beach chairs and everything just going right down the road. Cars being moved right down the street. That was scary.”

Just before midnight, the skies cleared, and the stars came out under a crescent moon. “A beautiful night!” she remembered. Instead of the end, it was the western eye wall of the category 2 hurricane passing north-northeast. Soon after the calm, winds gusting over 100 mph roared from the west across the bay. On the bayside, boats took the full force of this side of the storm. Slapping her couch cushion, Marion described the damage. “Slammed them up [slap!]. Pilings, wind, [slap!], right to the bottom.”

Such was life by the sea. Storms and all the trials, tribulations, and bounties that the Atlantic had to offer were a part of life. A life she lived when she and John were married just out of high school. There would be a few years away from the Island while he went to college and got a job working at the old mill in Roebling, New Jersey. Then his father put the first Miss Barnegat Light up for sale and John dove into the family business. What would follow were lean years as the old fisheries struggled before he and fellow fisherman Lou Puskas made previously unappealing tile fisheries marketable. For John, it meant a lot of hard work and time at the docks and out on the fishing grounds. This forced Marion to be industrious, which came naturally to her as a hard worker with a can-do attitude.

Taking care of a growing family that would number enough to field a Larson family baseball team in the end would be her greatest challenge and accomplishment. So much so, she was recruited to do it professionally. “I taught Sunday school [at Zion Lutheran Church in Barnegat Light],” she said. Head of the Sunday school, Ethel Jacobsen, one day “suggested that I take over her job.” Marion had a hearty laugh, then shared Ethel’s reasoning. “Any woman who can get six kids dressed and to Sunday school on Sunday morning is able to manage things.”

And manage things, Marion did. In addition to her work at the Sunday school, Mrs. John Larson also took on the bookkeeping of what became a fleet of fishing vessels split between Larson and Puskas that would grow the port of Barnegat Light into the tenth most profitable in the entire country. She would keep the Larson boat finances in order for years to come.

That keen eye would come in handy many times, even on the water. When a schooner towing another boat was blown ashore in a nor’easter in February 1963, it was Marion’s ears that perked up at the brief mention on news radio of ships ashore at Barnegat Light, all while making breakfast for five children and a husband still getting dressed upstairs!

“I ran up the stairs and looked out the bathroom window,” she energetically remembered. “I yelled ‘John, there’s two wrecks right out here on the beach!’” One of those wrecks became the famous mast still visible today off 11th Street.

This family and all of Marion’s experiences were set in motion on that storybook night at the freshmen dance back in 1949. “My girlfriend and I are standing there waiting for somebody to get the nerve to come ask us to dance.” Then Marion saw that handsome boy with the eyebrows she remembered from that day in fifth grade come across the dance floor at her. Marion couldn’t wait to take the first step toward the rest of her life. So, she didn’t wait! 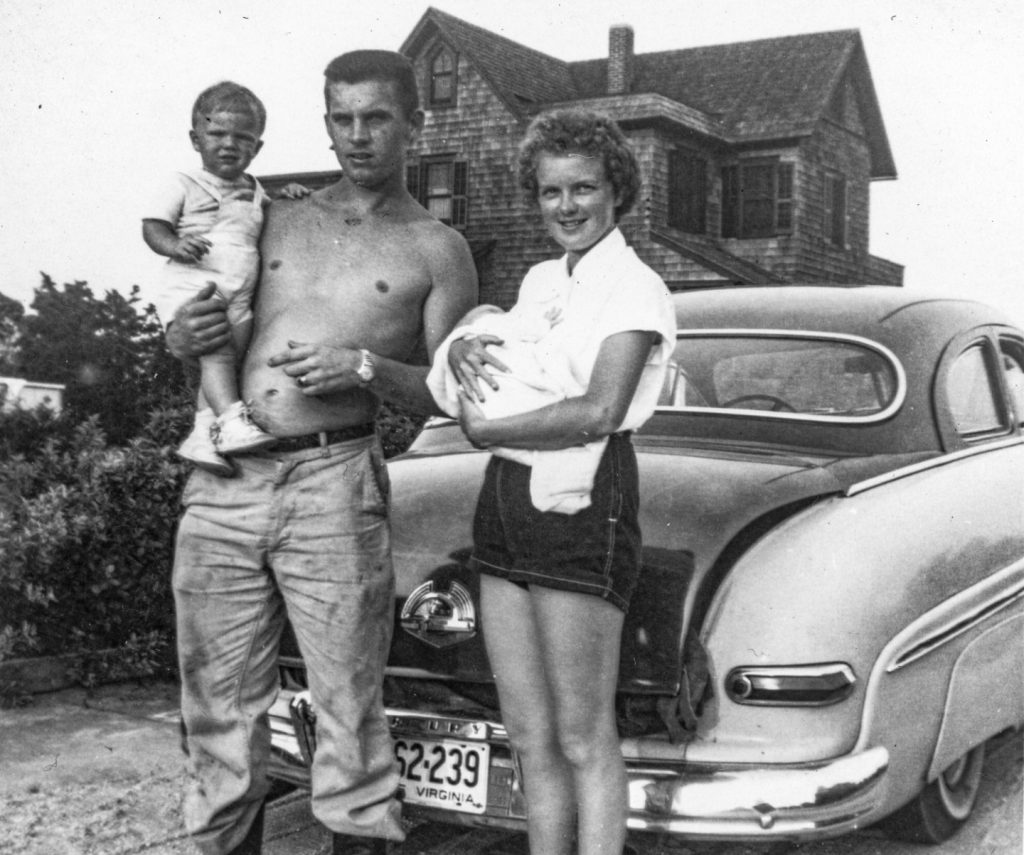 “I stepped forward. He hadn’t even opened his mouth yet,” she laughed. “I said, ‘Yeah, I’ll dance!’ I didn’t realize I had such nerve.”

Marion also thanks God she stepped forward because things could have gone differently. “When he was about 70 years old,” she explained, barely containing her laughter. “He said to me, ‘Babe, remember that night we met at the school dance? I wasn’t coming to ask you to dance. I was coming to ask your girlfriend!’ I didn’t know whether to laugh or cry! He kept that secret all those years!”

But Marion did step forward, and after a lifetime together Marion has no regrets, only joy and the count of her blessings. “We had a wonderful marriage. He was a wonderful man.” As an example of how wonderful he was, she described one benefit of having a husband with a dock where he was needed so often. “Anytime I would want to argue with him about something he’d say, ‘Okay, Babe, I’ll see ya later. I’m going down to the dock.’ Every woman needs to have a husband who owns a dock. He wouldn’t argue with me. It was so nice!”

Though Marion lost John in 2009, his presence is still felt in their house and in her heart. “He was part of my life for 61 years,” she said with joy and gratitude. Though she counts herself lucky, it is also true that Marion Oliver from Beach Haven made her own luck, through spunk, spirit, and an open heart. She said the song “The First Time Ever I Saw Your Face” always reminds her of John and those first moments when they were young. Marion, too, has given so much to so many that there are countless who hold her in their hearts just like the song says.

“The first time ever I saw your face
I thought the sun rose in your eyes
And the moon and stars were the gift you gave
To the dark and the empty skies, my love…”