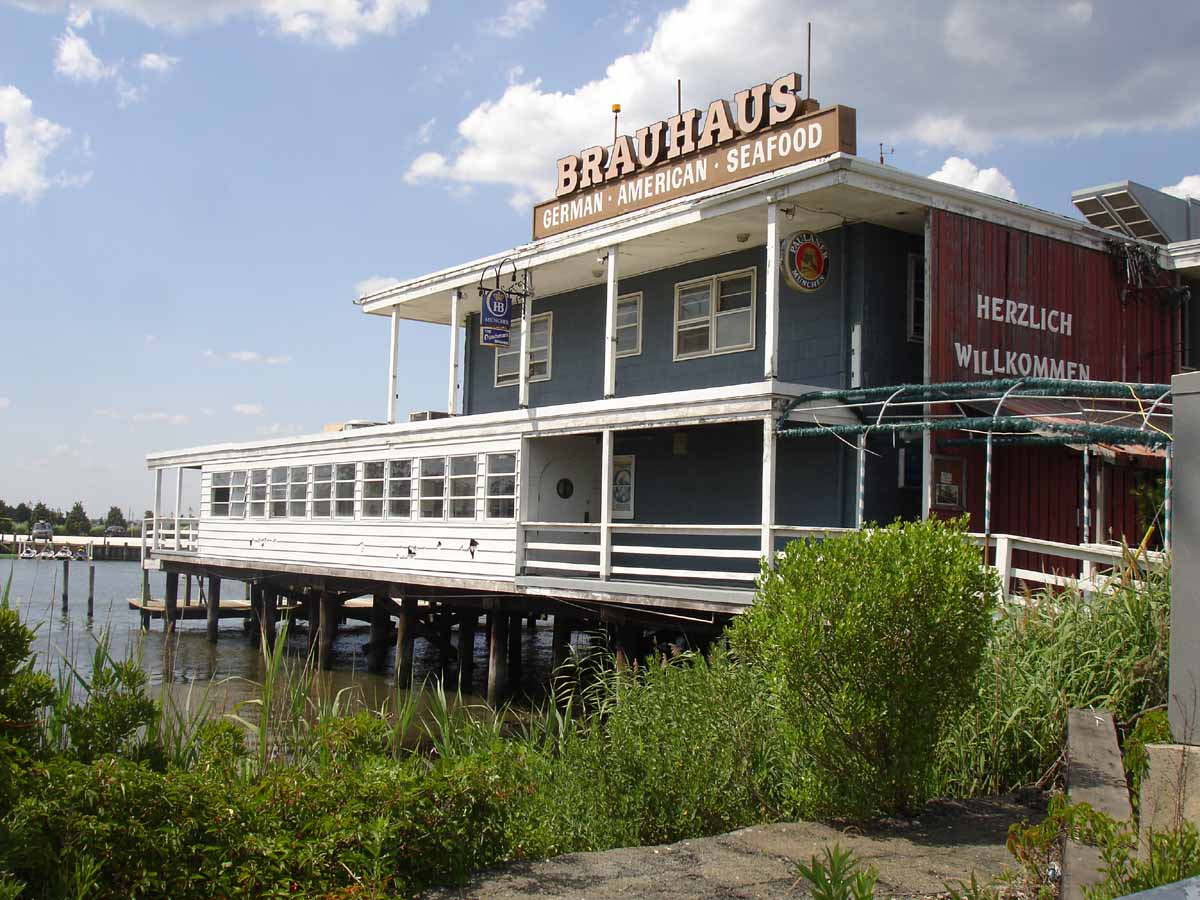 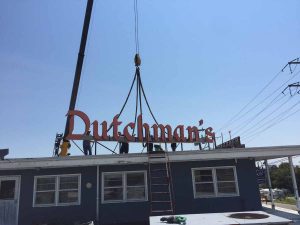 UPDATE (AUGUST 26, 2017) – With the approach of autumn, extensive renovations at the Dutchman’s Brauhaus Restaurant continue apace. “At this point the contractors have prepared the building for lifting,” said Richard Otto Schmid. Specially designed structures, set in place in the water around the perimeter of the building by Atlantic Structures Movers, will then be used to lift the entire structure off its foundation. Once lifted, the Dutchman’s building will be moved to the on-site temporary holding area. Formerly the parking lot, the temporary holding area has been prepared to house the building while it undergoes total renovation. “In our next phase, the existing 1912 pilings under the building, docking structures, and bulkheads will be removed by Butterick Bulkhead from Manahawkin, and Marwood Contracting of Harvey Cedars,” explains Schmid. “We’re using as many local contractors as possible.”

“This is a renovation project – not a demolition,” reminds Schmid. “The goal is to upgrade the Dutchman’s charm to last another sixty-five years.” To that end, the iconic Dutchman’s Brauhaus Restaurant sign will be repurposed in the remodeled restaurant. When reopened in 2018, the sign will once again shine as a beacon lighting the way to LBI.

UPDATE (JULY 7, 2017) – Exciting renovations at the Dutchman Restaurant on Cedar Bonnet Island continue as planned with the excavation of the existing parking lot in preparation of the construction of temporary footings. Once completed, the footings will temporarily hold the Dutchman building on dry land during extensive remodeling. During this phase, the original 1912 piling system will be extracted and replaced.

The extensive remodeling of the Dutchman’s Restaurant on Cedar Bonnet Island is continuing in late June through early July 2017. The next phase of the plan is designed to lift the building off its existing piling foundation so that the original pilings, dating back to 1912, can be extracted and replaced along with the bulkhead. “We are remodeling the building from the inside out once it’s on land”, said Rick Schmid. “This is a renovation project and not a demolition. The goal is to upgrade the Dutchman’s charm to last another 65 years.”

The Dutchman’s existing one hundred and five-year old wood piling foundation was recycled from the original wooden causeway bridge when it’s pilings were extracted in 1959. Making the iconic Dutchman’s Restaurant truly part of the very fiber of Barnegat Bay. 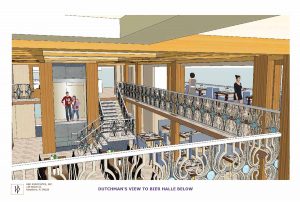 Since starting in 1952, by Otto and Thekla Schmid, the Dutchman’s Restaurant has remained family owned and operated to this day. Originally established as a small bar and dining room called the Bayshore Bar was located in what is currently the Dutchman’s customer parking lot. In 1958 Otto and Thekla’s son Robert and wife Joan took over. Then, the infamous nor’easter of March 1962 took its toll and the structure we know today was built and opened in February 1963 as the Dutchman’s Brauhaus. Since then the Dutchman’s has undergone several modifications, including the enclosure of an open porch in 1969 and the upstairs porch in 1976. Further expansion to the back section of the kitchen in 1981 and to the upstairs in 1983 enabled the Dutchman’s to begin hosting large private parties and banquets for groups up to one hundred and twenty-five. 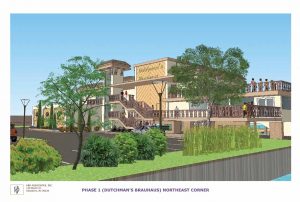 “The welfare of Barnegat Bay and construction time tables are our top priorities. Our project has been scheduled to take place within a certain time frame as to not interfere with any marine life, whether it’s north, south, east or west of us and this takes time.,” advised Rick. “We have an open window until November 2017 for the lift and splitting of the building and replacement of the existing piling foundation. We insist that this entire project be environmentally sustainable for Barnegat Bay”, Rick continued.

“We are going to be raising the whole facility by almost nine feet. We need to go up five and a half feet for the new flood maps,” says Rick. Surge levels are also being taken into consideration. According to Rick, all the pilings used under the building will have a one-hundred-year rating and will be all natural. “The Dutchman’s will either be on Epay Brazilian hardwood pilings or green wood pilings; both are natural woods. It takes time to acquire these pilings, because they all have to be origin certified and not poached.” 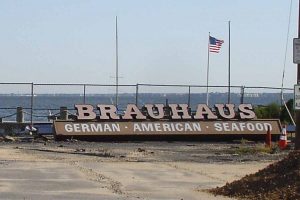 Finally, this next phase of the plan is not just like moving a house, where you detach the pilings and move the building. The Schmid’s and their team of contractors will have to set a full new system down into the water, around the perimeter of the existing building. Once this system is in place, it is designed to lift the building, which will then be split into two or three sections – determined by designated stress points. The restaurant will go off into the parking lot to be remodeled and the existing 1912 pilings under the building and the bulkheads can be extracted. The projected reopening of the Dutchman’s is slated for some time in 2018. Coming editions of Echoes of LBI will continue exclusive coverage of this exciting project.

While renovations at the Dutchman’s continue, please visit Robert Schmid at the Octopuses Garden, located on Route 9 in Stafford Township; (609) 597-8828 or visit: www.theoctopusgardenfishhouse.com. And for all your catering needs, from formal dinners to outside barbecues, please contact David Schmid of Spice Catering at davidschmid.dutchmans@gmail.com or call (609) 494-8197.

Authors note: When we pressed Rick about any future endeavors, we learned something is definitely brewing…Coming Soon: Mickey’s Port of Call Pub with the Future Beer Exchange.