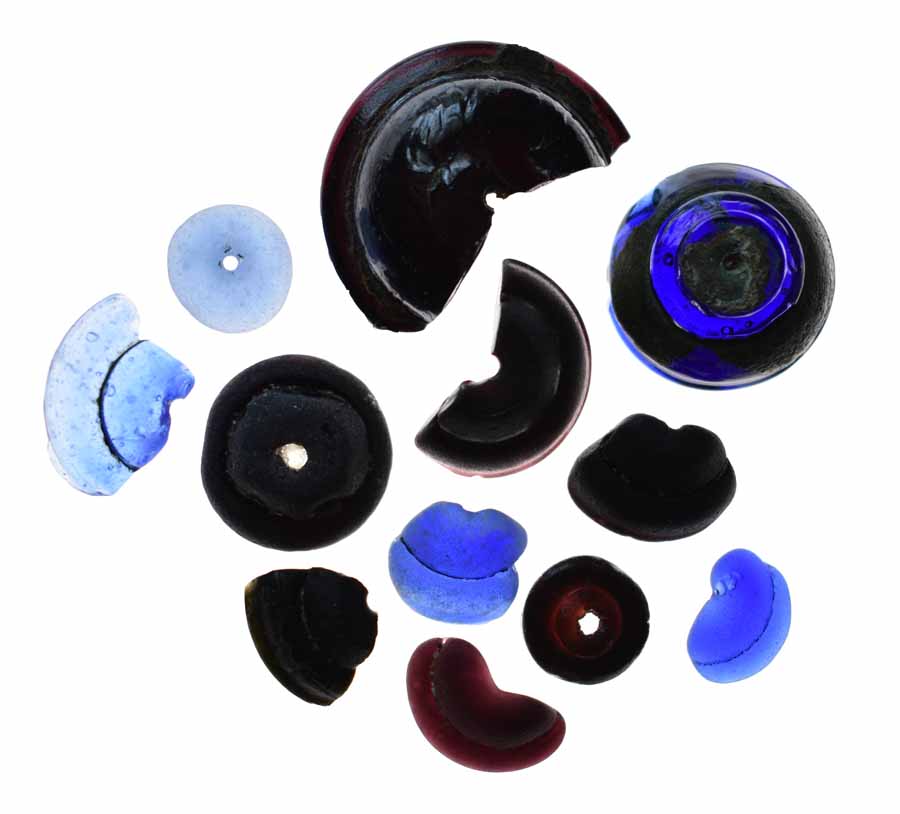 Sea glass collectors are always on the hunt for the rarest finds. To most, a sea glass stopper, marble, or whole bottle would be the find of a lifetime. However, one of the rarest finds out there often goes ignored by beachcombers or is mistaken for a button. Light bulb Vitrites are the tiny insulator found on the bottom of standard incandescent light bulbs. These colorful glass caps have found a home in the jars of many sea glass hunters’ collections, but most do not know the history of their finds.

In the late 1800s, there was a need for a dielectric material that could hold a light bulb’s electrical brass contacts in place and work as a sufficient insulator. By the 1880s, early light bulb insulators were made of wood and secured in place with plaster of Paris. In 1881, the wooden insulator cap was eliminated in favor of the less costly option of using just the plaster. Unfortunately, plaster took too long to dry and had a tendency to re-absorb moisture in humid conditions. In 1900, molded porcelain insulator caps took the place of the plaster. However, this method was expensive and labor intensive because the contacts had to be added after the clay was fired. In 1901, a solution was found by Alfred Swan, brother of Sir Joseph Swan – the inventor of an early version of the incandescent light bulb. Swan created Vitrite, which acted as the perfect insulator for the bulbs because it could easily be molded around the contacts. Although referred to as glass, Vitrite is a type of enamel that contains a high concentration of lead monoxide and manganoc (manganese oxide) which gives it a deep purple color. From this point onward, light bulbs featured the Vitrite insulator cap on the bottom of the bulb.

As time went on, and more people expanded west, the need for electricity and light bulbs caused a surge in the production of Vitrite. One of the largest areas to produce the glass was the Great Lakes. They produced so much of it that the large balls of purple slag can still be found today along the shorelines. It is said these large chunks were used as erosion control in the 1950s. As with any mass-produced item, companies began to compete and patent the color used for their batch of Vitrite. This is why light bulb Vitrite caps can be found in the colors fuchsia, red, cobalt, ice blue, deep green, and deep amber in addition to the more often found deep purple. Every time they made a batch of Vitrite, the glass manufacturer had to test the color to make sure they stayed within their patent. A tiny stamped seal of glass, similar to a wax seal, was made at the same thickness as the Vitrite cap and held up to the light to determine the color, then discarded. Compared to the caps, these stamped seals of glass are incredibly rare and mostly unheard of. In my thirty years of sea glass collecting I have only seen one.

Light bulb Vitrite caps are almost always found broken because the pin that held them in place tended to be pressed in so hard during manufacturing it caused the cap to crack. Many sea glass collectors who find one mistake it for a button or bead. On modern incandescent light bulbs, the cap is only a few millimeters thick, where in the past it would fill the entire end of the light bulb’s metal ring. Vitrite is still in use today in some bulbs, but many have been replaced with acrylic. They are most often found in locations of historical significance, but you’ll have to look very closely as most are the size of a nickel. Vitrites are easily missed because they look like black shells, so look closely on your next visit to the beach.