Artists often look to the natural world for inspiration. It is then, no surprise they are often humbled by the greatest artist of all: Mother Nature. The way a leaf unfolds or a wave crashes against the shore can spellbind and transform us just as it does the world. One of the most mesmerizing, which has captivated humanity since our beginning, is lightning. This powerful arch of electricity not only creates intense heat and light but can produce an amazing work of art: Fulgurite, lightning’s sculpture of fused glass. This delicate, natural work of art is created as hot plasma touches the earth, instantly fusing sand into the shape of the bolt as it travels through the ground. Hunting for this rare, captured lightning has grown into a popular beachcombing pastime. 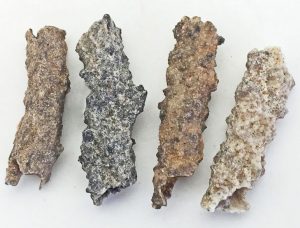 Fulgurite is an irregular glassy tube produced when sand or siliceous soil is fused by a direct lightning strike. The resulting glass structure is usually hollow with the thickest portions being near the surface of the sand, with consecutive thinner branches spreading down and outward. A tremendous amount of energy is needed to create fulgurite. It seems to form best in sand with uniform mineral composition and electrical resistance. The minerals must be fusible at the temperatures reached by a bolt of lightning. It is believed the tube-like structure is caused by the rapid cooling of the glass; or by the proportions of the sand to mineral mixture in the ground, in which the glass was drawn to in a viscous state creating the mold. 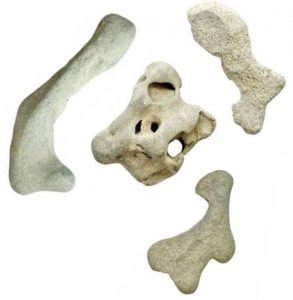 Fulgurite is very fragile, unlike manufactured glass to which other elements that increase strength and temper are added in a controlled setting. Many beachcombers come upon smooth gray stones in lightning-like shaped and believe they have found fossilized fulgurite. These “fulgurongs”, which often feature weird, sometimes symmetrical formations, are in-fact concretions. Concretions are a sedimentary rock formation that makes up the coastal bedrock of the eastern United States. Concretions sometimes form in successive layers around a nucleus, such as a shell or pebble. As the minerals within a sediment precipitate, they harden, often into strange shapes.

These unusual stones can be further shaped by boring clams such as piddocks, or angel wings. The holes they bore continue to wear down after the animal dies and leave a Swiss cheese effect, sometimes resulting in a lightning bolt shape. Hunting for fulgurite can at times feel like the proverbial wild goose chase as not all lightning storms guarantee a strike. Not to mention the fragile nature of the glassy tubes means there may be a limited time to find the treasure as fulgurite’s composition does not allow it to survive the harsh tumbling of the sea. Like lightning, sometimes we must find the best places to touch down when searching for these fragile memories left behind by a storm.