THE STORY OF THE BARNEGAT LIGHT MAST 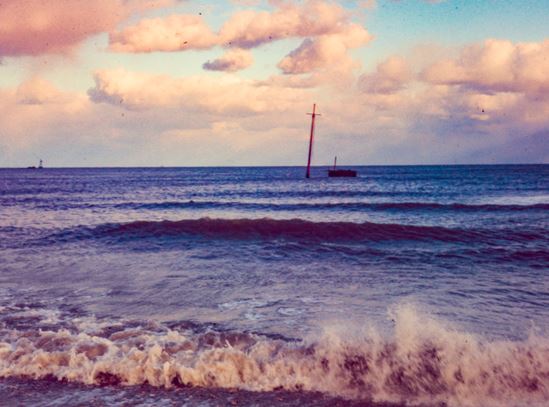 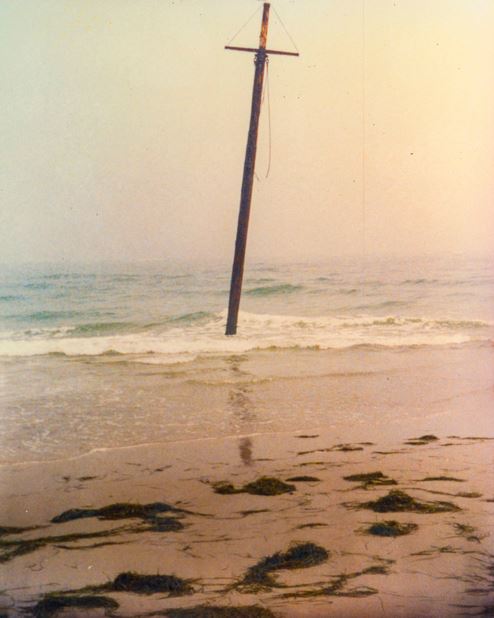 On a cold and stormy morning in February 1963, Marion Larson was in the kitchen of her 12th Street cottage in Barnegat Light making breakfast for her five children before they went off to school. Captain John Larson was still upstairs getting ready for the day. The radio was on, filling the room with news from New York to go with the aromas emanating from the stovetop. The routine of a normal morning was upended when local news came over the radio. “Two ships aground off Barnegat Light,” the announcer said.

“I ran up the stairs and looked out the bathroom window,” Marion recounted as vividly fifty-five years later as the day it happened. “All those houses [toward the beach] weren’t built then. I yelled to John, he was still in the bedroom, ‘John, there’re two wrecks right out here on the beach!’ He jumped up and ran up to the attic to get a better view.”

Seven-year-old Karen Larson and the rest of the kids in the kitchen wouldn’t miss out on the excitement. “All the kids ran after Dad,” recalled Karen. “We were all trying to peer out these two little windows on the third floor. And as we finally got our eyes close to the window, Dad ran back down the steps.” Captain Larson was already heading out the door to the Independent Docks on 18th Street and his excursion boat, the 58-foot original Miss Barnegat Light.

Earlier on the morning of February 12, 1963, the 95-foot Sea King, a scalloper out of Atlantic City, was towing the 136-foot PCS-1423 Prescott, a decommissioned Navy minesweeper, from the Brooklyn Navy Yard to Atlantic City for conversion into a scalloper. Passing the Barnegat shoals on the way, the Sea King was battered by a nor’easter and found herself at the mercy of the furious sea. The next day the Asbury Park Press reported, “Trouble developed at about 1 a.m. yesterday when the Sea King apparently ran aground and the towline slacked, fouling in the fishing boat’s screw.” The Coast Guard stationed at Barnegat Light responded, but even they encountered trouble when an engine failed. Captain Larson aboard the Miss Barnegat Light with his mate, James Thomas, arrived on scene to support the rescue efforts.

Captain Walter Jaggard, Ener Gunderson, and Arthur Fjereide were aboard the sinking Sea King, floundering in ten feet of water just off 11th Street about 100 yards from shore, while Martin Ferkingstad was riding the Prescott up onto the beach, rocking back and forth in the waves. “It had no fuel in its tanks, which helped it get so far up the beach,” explained Marion. Captain Larson brought his boat as close as he could and urged the men to abandon ship. 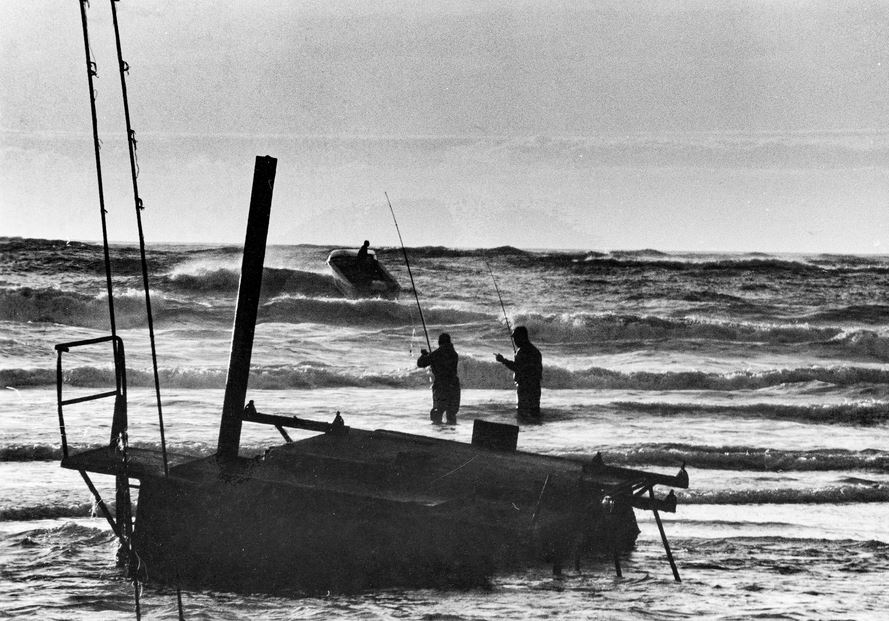 “It was…really sinking bad,” Marion told of her late-husband’s efforts. “John said, ‘Come on! Hurry up! Get in the boat, get in the boat!’ They were trying to save their wine or something. He said, ‘Get in the boat, quick!’ So, they got in a little dingy or something to try to get closer to John and…banged into [the Miss Barnegat Light]…, and they all fell back in their little boat. They finally got on board and John brought them in.”

The question now had become how to refloat the two beached boats. The owner of both, Captain William McConnell of Pleasantville, arrived in town and worked closely with Captain Larson over the next month to salvage his property.

“I never made so much coffee in my life,” Marion remembered. “They were always in the kitchen planning what they were going to do,” recalled Karen.

Several attempts to pump out and raise the Sea King failed. Holes in the hull below the waterline made efforts difficult. Weather forced delays. As part of the effort, Captain Harry Livingston of the Albatross III brought in pumps. February 21st saw the Sea King rise off the bottom for the first time, but the Asbury Park Press reported it nearly ended in calamity. “The listing trawler heeled over as a line between her and the Albatross [sic] pulled the two boats together. Capt. Livingston’s boat was threatened by damage as the vessels bobbed side by side in rough water, so pumping was halted, and the Sea King sank again.”

McConnell abandoned salvaging the scalloper for the time being. Larson and McConnell had already removed valuable equipment from the boat and the owner was looking at costs approaching $20,000 to save the uninsured Sea King. McConnell had bought the Prescott to help secure his financial future. Now, he faced possible ruin if both ships were lost.

The Coast Guard, Navy, and Captain Larson worked together to dig out the intact Prescott from its beached position. The sight had quickly become the newest tourist attraction in Barnegat Light. Weekly stories in local and national newspapers tracked the efforts to free her. Karen remembers “coming home from school…just hordes of people…crowds and crowds of people coming to 12th Street.” Even locals got into the fun. Captain Larson would take his four-wheel drive truck up on the beach with Karen and the kids. “Dad would put us all in the truck and at low tide you could drive around the minesweeper.”

After clearing away sand from under the Prescott and tugging at her for weeks, on the night of March 9 they finally got the 136-foot vessel off the beach. In the end, the efforts were heroic. “It was a full moon; high tide,” explained Karen. “I know my father. When he was determined to do something, he did it.” 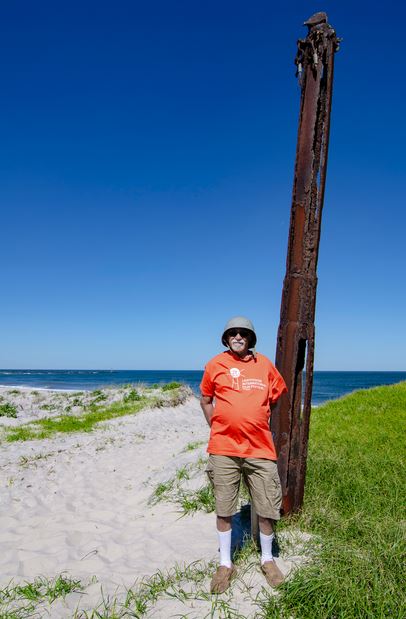 Anchors in the sand and winches on the stern would right the boat, but time was of the essence. The Asbury Park Press recounted the dramatic final efforts. “John Larson…saw the ship bobbing in the water at high tide Saturday morning. He climbed aboard and began tightening the cable extending from the winch to the anchors. Mr. Larson “winched” the ship about 30 feet before the tide went out. That night at high tide he and three other men worked at the winch for two hours while the Coast Guard boat stood by. The ship was afloat by 8 p.m.”

The Prescott went on to a long life as a scalloper out of Cape Charles, Virginia. The Sea King though, remained in the shallows in the shadow of the old 8th Street inlet jetty. Children walked out to climb on the substantial wreck in the early days, which drew some complaints from parents to Mayor Otto Olsen. Because of its location near the jetty, the Coast Guard stated that it was not a danger to marine traffic.

McConnell made additional attempts to raise it in 1963, but costs and the futility of it caused him to give up. His last words to a reporter from the Asbury Park Press on the matter were, “I’ve had a bad enough time already. Just forget about the boat.”

Over the years, people swam and windsurfed around the decaying wreck of the Sea King. Fisherman cast near her in the surf and children climbed aboard at low tide. The beach slowly advanced on the wreck. After the inlet jetty was extended from the lighthouse in the late 1980s, the sand built up quickly, putting the wreck on the beach and, now, far in the dunes of 11th Street. What was once in the water 100 yards east of shore…is now in the sand nearly 100 yards west of shore.

The Barnegat Light Museum features the story of the wrecks of the Sea King and Prescott, including artifacts such as helmets taken from the old minesweeper. For more information about the history and people of Barnegat Light please see www.facebook.com/groups/barnegatlightmuseum