Written and photographed by Diane Stulga

I have always felt that if we believe and work hard enough our dreams can come true. My husband, Vic, and I lived in central New Jersey for more than twenty-years. We dreamed of having a home on LBI. Its sparkling water and beautiful star lit skies have always been like a million lighthouse beacons calling us home.Our dream came true in 2007 when we purchased a house on a lagoon leading out to Barnegat Bay. And in September 2010, we settled into life at the New Jersey shore, full-time.

That October was our first Halloween in our new home. It is one of our favorite holidays and we looked forward to the arrival of Trick or Treaters even though some of our new neighbors had cautioned us not to expect any. We had never heard of such a thing and found it impossible to believe. And yet, as the day wound down our doorbell never rang. 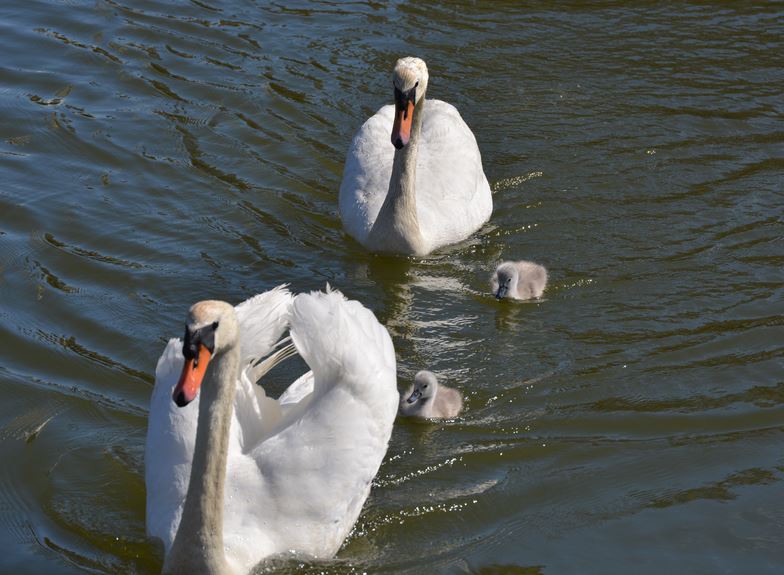 As the sun set, I walked along our dock feeling certain that Trick or Treaters were headed our way. I looked up to see a pair of beautiful white swans swimming toward me. Ah ha…I do have Trick or Treaters! Delighted, I dashed into the house for something to feed them. Standing on our dock, so close to those beautiful creatures watching as they ate, I could hardly believe my eyes. When the food was gone, the swans lingered with me at our dock for a while. Later, when they slowly swam away, I was filled with a sense of happiness.

Weeks later, on Thanksgiving, as our family prepared to sit down to dinner, the swans returned. Our grandchildren were so excited, we dashed out to the dock to feed them. To my amazement, just as they had done the first time, the swans did not rush off after they ate. Again, weeks went by with no sign of the swans. But on Christmas Day, as our family returned from a walk, the swans were at our dock to greet us. To every one’s delight, the swans ate and stayed with us for a little while. We watched in quiet amazement as they swam away. Later, we laughed about how our special swans only visited on holidays.

The swans returned a few days later — on New Year’s Day — and again, on January 18th, my late father’s birthday. Over the next two years they continued to visit us on various birthdays, anniversaries, and special occasions. Each time, long after the food was gone, the swans remained at our dock with us for a while. Each visit was magical and filled us with a sense of awe.

On October 29, 2012, we left our dream home at the New Jersey shore to seek safety from hurricane Sandy. When we returned to LBI on October 31st, Halloween, the roads were closed to prevent anyone from driving into our community. We parked our truck two miles away and walked home. As we made our way back to our house it was cold, gray, windy, and eerily quiet; none of our neighbors had returned yet.

All around us the devastation was indescribable. Our once beautiful neighborhood now looked like a war zone; debris, belongings, cars, and boats were everywhere. Some houses had been completely destroyed. Everything was coated with black muck, and the stench was overwhelming! Through our tears, Vic and I started cleaning up. Even though we did not know where to start, we knew there was no other place we wanted to be that day or any day. We had worked hard to make this dream come true. And now, despite the devastation we were facing, this was still our home.

Later that afternoon, we took a break from our cleanup. Exhausted and cold, we walked out to the tangled remains of our dock and boat. Standing there, surrounded by destruction, we watched in tearful disbelief as the swans, now covered with muck and mud, swam toward us. By some miracle, they had survived! As we fed them and talked to them, I turned to my husband and said, “Our special swans now have names, Hope and Faith.”

It has been years since hurricane Sandy. Yet, we still wonder how Hope and Faith managed to survive the storm. For us, as it has been for so many others, recovery has been long and hard. Faith, family, and friends carried us through an incredible transition. We thank God that we are here — still living our dream — in our home on LBI.