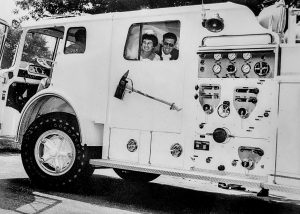 When we came to Ship Bottom early in 2002, Herb Born was one of our neighbors. He was friendly and always willing to share his vast knowledge and interesting stories about LBI. His oral history of LBI enriched the lives of many and sometimes made its way into the pages of Echoes of LBI. Herb was someone who made the world a better place just for being in it. We were fortunate to have known him. He will be greatly missed.

Herb lived in Ship Bottom his entire life. The only time he did not was when he was drafted and served in the U.S. Army. Herb and his wife, Pat, would frequent yard sales on their bikes, where he usually looked for books or anything having to do with local history. He really didn’t need these books since he already lived so much of the Island’s history and was a part of it. He was always willing to share his knowledge with everyone. 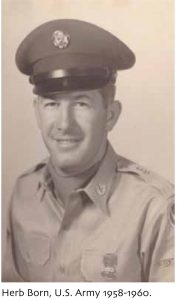 Herb was one of four children: Fredrick, Lewis, Herb, and sister Patricia. He was born at home on 8th Street, delivered by Dr. Willis to Fred and Jane Born. Herb’s middle name was Willis after the doctor that delivered him. His family came to LBI by way of Philadelphia in the 1920s. His maternal grandfather, Buck Ewing, was Ship Bottom’s chief of police. In the early years Fred worked in security at the air force base in Lakehurst, New Jersey. Buck was instrumental in Fred getting a job working as a motorcycle policeman in Ship Bottom and introduced him to his daughter, Jane.

Herb’s family was always very civic minded and generous. There was one time a man knocked on his mother Jane’s door]. He looked hungry so she gave him some fish head soup, a dollar — she only had $5 — and sent him on his way. When Herb’s father, Fred, came home, he asked if she had seen anyone and she told him about the man that stopped by, only to find out that he had escaped from prison.

Herb’s father was young when he had a stroke — there was no Social Security Disability Insurance in those days — so his mother had to find odd jobs to support the family. There wasn’t much money and Pat shared a story about Herb’s mother and the children hitchhiking to Camden to buy shoes.

Herb went to Beach Haven School and graduated from Barnegat High School in 1954. Like many young men that served in the military, Herb received his draft notice when he was still in high school. He obtained a deferment to finish school. His next notice came two years later. The only time Herb ever left LBI, or Ship Bottom was between 1956-58 when he served in the U.S. Army in White Sands, New Mexico.

Volunteering has always been like blood through Herb’s veins. It was important to give back to his community. He was a volunteer with the rescue squad and then became a member of the Ship Bottom Fire Company Station #1 in 1954. He was president of the fire company in early 1960s and was selected as Fireman of the Year in the mid-1960s.

Herb worked at the Sunoco gas station that was located at the circle in Ship Bottom. He also worked for NJ Natural Gas and the water company. 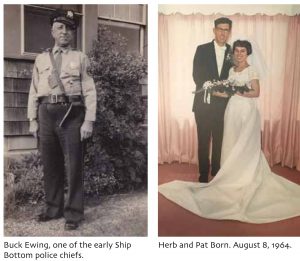 Pat grew up in Richland, New Jersey right outside of Vineland. She graduated from Glassboro State, now Rowan, and in 1962 applied and was offered a job as a kindergarten teacher at Long Beach Island School. One of the community service programs was to have firemen come to the school and speak to the students about fire safety. That was when Pat met Herb. A while later she discovered that her tire was flat. Knowing that Herb worked at the Sunoco station Pat asked for him to come help her. As a thank you, Pat wanted to make dinner for him but, chickened out and cancelled. Herb apparently had also taken a liking to Pat and decided to come for dinner anyway. They dated for five months, got engaged in April and were married in August 1964. Pat was twenty-five and Herb was twenty-nine. The wedding was in Richland and Herb arranged to have a Ship Bottom firetruck outside the church to surprise Pat when they came out.

Their first child, Maria was born in 1965, followed by Justin in 1966, followed by Tim in 1967. Herb and Pat bought a house on a double lot on Barnegat Avenue in Ship Bottom where they lived until that house was too small for their growing family. The lot was subdivided in 1972 and the new house that they have lived in since then was built in 1973. They did a lot of the interior work themselves. The downstairs had been a rec room for the kids and after Sandy was renovated. Pat also shared with me that sections of the sidewalk in front of the house are over one hundred years old.

The 100-year anniversary of the Ship Bottom firehouse is coming up and Pat has been helping to gather photos and history for the celebration. 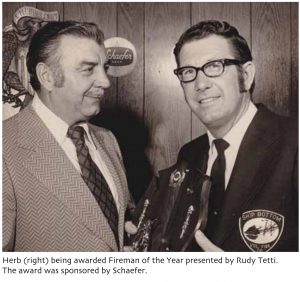 Dedication and civic mindedness were very much a part of Herb’s life yet, he never served in any elected capacity. He was outspoken at council meetings when he felt the need. Herb could often be seen riding his bike around town or walking on the beach looking for sea glass. He and Pat enjoyed going to yard sales looking for antiques and bits of LBI history. His garage contains so many pieces of local history, it’s like walking through a museum. The history attached to many of those items is priceless.

Herb looked forward to each issue of Echoes of LBI Magazine and had people that could depend on him to deliver copies. He even mailed the magazine to people as far away as Germany.

Years ago — when gas stations offered full-service — the local gas station was a place where men from the town would hang out, talk politics, and share local gossip. Herb’s own garage under his house became a hub where he became the purveyor of local history. If the door was open that was the signal that Herb was there and ready to share stories. Anyone that heard the stories firsthand from Herb is fortunate. Currently, Justin is staying with his mom, Pat, in Ship Bottom to lend a hand. According to Justin, if Herb’s garage is open the stories will still flow. The only difference is Herb’s chair will be empty. 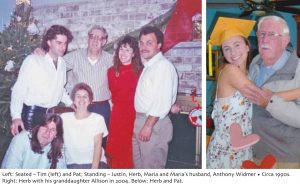 Herb lost a lot of cherished memorabilia during Superstorm Sandy. His mind was sharp, and his knowledge of the history of LBI and his willingness to share those stories of the Island were priceless. Most of this article was based on photos, stories, and history that his wife, Pat, and son, Justin, shared with me.