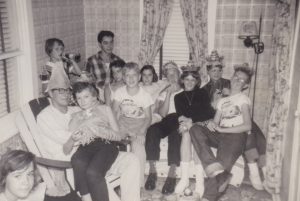 Linda Skirpan-Jurman has many
happy memories of her life in what
is now an historic home in Ship
Bottom that she is working to maintain. “My grandfather purchased the lot in 1936 for $75.” He then built a shed to store tools to build his home. But his family had other ideas and wanted to be at the seaside sooner than his timetable permitted. What resulted was an expansion of the tool shed. “My grandfather decided to provide a respite from the city for us. Following the footprint, he added a porch, built an upstairs dorm-like bedroom and an outdoor shower.”

Soon the family started traveling to the shore. Linda recalls on “Friday evenings, as little kids, mother would bathe us, dress us in pajamas, and then put us to bed. The next morning, we would wake up in Ship Bottom!”

Her father, an employee of The Philadelphia Inquirer, worked until midnight delivering a truckload of papers for early morning readers. Then he would come home, lift his sleeping children into the station wagon and drive to the shore. 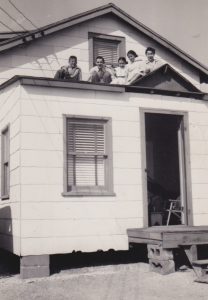 Linda recalls waking up in the Ship Bottom home, “I may have been joined by fourteen other people. I loved it,” she smiles. “Three brothers, cousins, tons of aunts and uncles and grandparents, joyfully filled our home.” Her grandmother and grandfather, cooked breakfast. “We were poor and there were a lot of people to feed, so a typical breakfast always included Spam, which I love to this day. “And, yes,” she laughs, “I know it’s not exactly considered a health food.” Sometimes the menu changed to chopped hot dogs with eggs scrambled in, “The smells in the kitchen were a delight to the hungry kids who had already been to the beach and were ready to fill their hungry bellies. “

Eventually, Linda’s mother found a summer job at the soda fountain of a five and dime store. “We lived at the shore, and my dad came down on the weekends,” explains Linda. 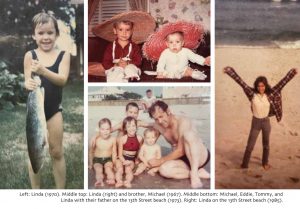 Upon graduating from high school, Linda got a job at the court in Camden County where she worked for thirty years until the illness and passing of her husband. At her husband’s request, she took over the running of his business. “I am a humble person. I didn’t think I had any talent for anything, let alone running a company.” But Linda stands on the shoulders of strong women. “My mother and grandmother always encouraged me to study business subjects, be strong, and try to do things to the best of my ability.”

Due to her husband’s illness, the company had lain idle for a few months. Bills piled up and sales slowed down. Linda wanted to reignite her husband’s company and honor its integrity. That attitude led her to get the company running again. She paid all the bills, sent invoices out to customers who owed money and expanded her horizons by advertising. Soon, the company was out of the red and into the black with new customers coming in every day. She encouraged her workers to follow up on every lead, no matter how small. At times, Linda found creative ways to overcome seemingly insurmountable problems presented by jobs, turning defeat into success. She brought the business back into full swing.

Although her husband has large shoes to fill, there’s a certain young son named Matthew who could fill them someday and that would make Linda very happy.

Now that the company is back on its feet, Linda wants to focus on the old house in Ship Bottom to preserve the happy days and memories associated with it.