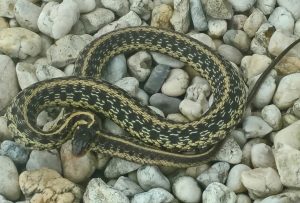 Written and photographed by Sara Caruso

When many people think of snakes, they envision venomous deceptive monsters. Unfortunately, this long held misconception has made snakes a target of humanity’s wrath throughout the ages. As a result, through fear or ignorance, snakes are often mindlessly destroyed. Despite their slithery, scaly appearance and unfounded reputation — snakes have a very important place in the ecosystem. By consuming pests that damage homes and gardens, they help to maintain the balance in nature. One local species of snake is doing its part to keep some of the worst pests at bay.

The eastern garter snake (Thamnophis
sirtalis sirtalis), a subspecies of the common garter snake, is native to the eastern United States. They are found throughout New Jersey in a wide variety of habitats which frequently include our Long Beach Island yards and gardens. Eastern garter snakes are small, generally ranging from 18 to 30 inches long. Their body color may vary from green to brown with splotchy or checkered markings along the sides, and typically has three yellowish longitudinal stripes — one down the center of the back and one on each side of the body. Like many snakes, the eastern garter snake has garnered an unfair reputation despite being an important form of natural pest control.

Destructive small rodents like mice and moles, and plant damaging pests like slugs, snails, crickets, and beetles make up the primary diet of the eastern garter snake. Some experts believe garter snakes may also dine on termites and spiders. Snakes themselves are an all important food source for owls, hawks, ospreys, and other birds of prey, as well as herons, turtles, raccoons, and otters.

In early spring, eastern garter snakes are frequently seen sunning themselves on rocks or in the street after emerging from brumation – a deep sleep induced by winter temperatures. During their spring mating season garter snakes are known to form mating balls comprised of multiple writhing snakes. These mass matings are mostly made up of males searching out a female to pair with. Garter snakes are ovoviviparous as they give birth to live young instead of laying eggs. A female snake can have a litter of three to eighty babies.

Unlike vipers, Eastern garter snakes do not have fangs. Instead they have very tiny teeth that are useful for grasping and holding onto slippery prey. Garter snakes produce a mild neurotoxin that aids in the process of swallowing live prey whole by inducing paralysis. However, it is not dangerous to humans.

Eastern garter snakes are shy and generally flee upon encountering people or predators. But like any wild creature, if handled, the garter snake may bite to escape. Though startling and somewhat abrasive to the skin, their bite is harmless.

Like all creatures, eastern garter snakes have a vital role in maintaining the balance of the ecosystem. They are beneficial to our gardens and are an important part of the wildlife of LBI. They deserve our protection and our respect.