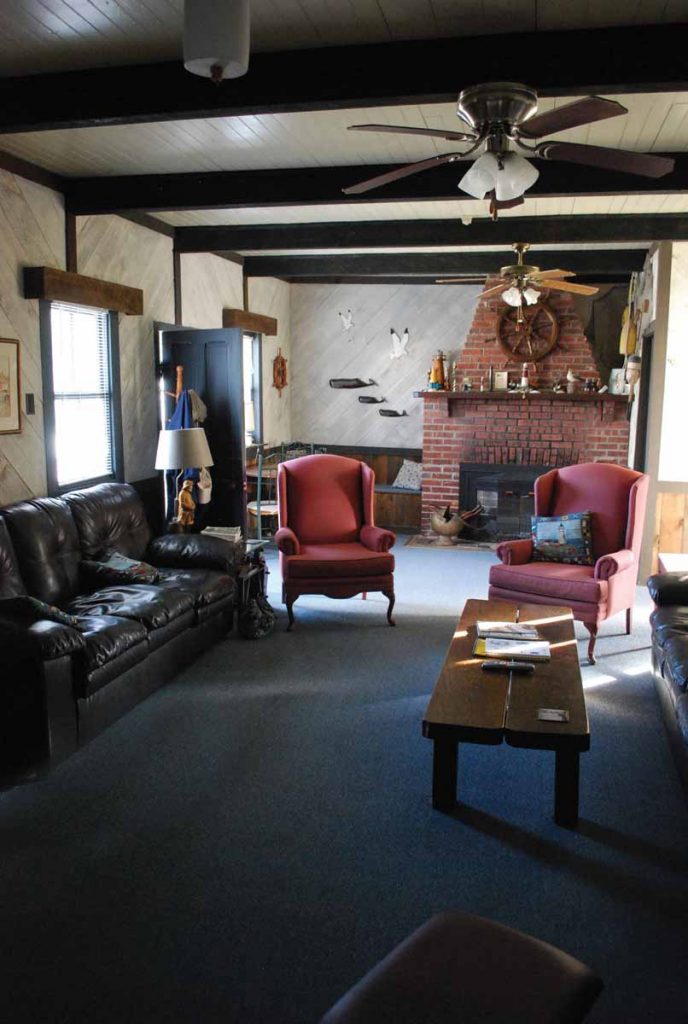 The Baldt’s living rooms complete with pulleys and hooks where equipment used to hang.

By Vickie VanDoren and Diane Stulga
Photography by Sara Caruso

Rick Baldt has been coming to LBI all of his life. His family always rented, and all of his adult life he searched LBI for the perfect summer home to buy for his family. He looked at new architecture, which wasn’t what he wanted. In January 2014, he and his childhood friend, builder Robby Maines, looked at a lot with the thought of building the family’s dream home. This didn’t work out either. His daughter, sensing her father’s frustration, sent him a picture of a house she found online in the historic district of Ship Bottom. Rick and his wife Beth drove down the next day from Moorestown, New Jersey to look at it. Their dream home had to be livable and having a history would be a bonus. This home would be a family home for Rick, Beth, their three daughters and their families. 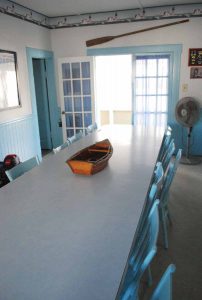 Original dining table which is bolted to the floor.

When they walked into what is now the living area and saw a lamp made from an anchor – a Baldt anchor, they felt that serendipity had brought them to this house. Rick’s great grandfather, Frederick Baldt, was the inventor of the Baldt anchor that is still used today on Navy ships.

The structure was built in 1871, yet some accounts have it dating back to 1849. The building has no insulation and during some recent remodeling revealed wood under the siding from shipwrecks. Life Saving Stations were painted red so that ships in distress could see them. Many neighbors still refer to it as the Red House. Local lore also indicates it was a “House of Refuge” because people knew there was always a can of biscuits, a cot and fresh water. 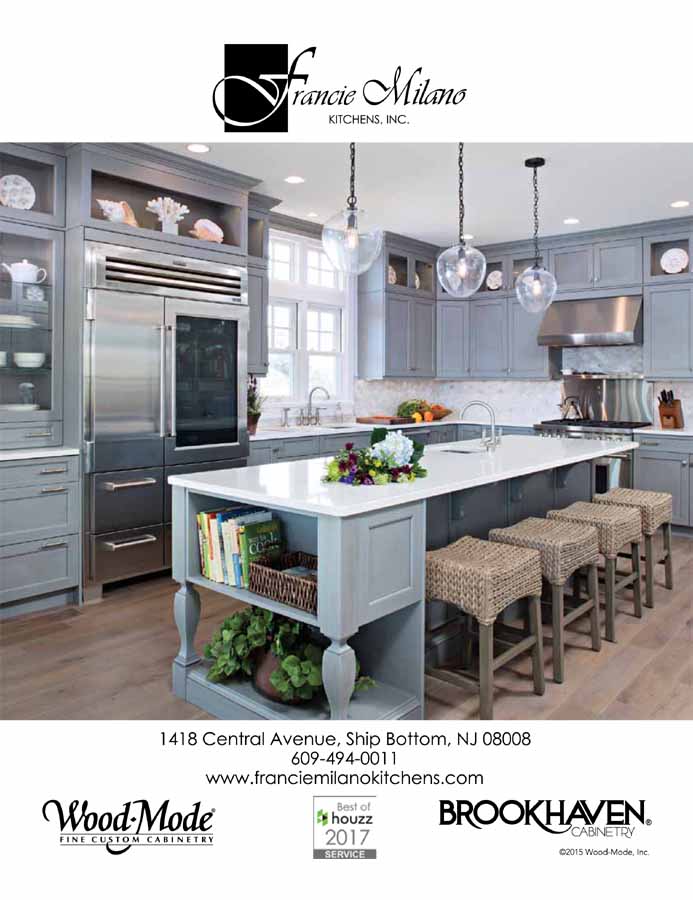 The original dining room with an old wooden table and 14 chairs is in the first room you see when entering the house from the screened-in porch. There is a storage bench along one wall that is flanked by two built-in storage cupboards. Rick showed me one of Beth’s recent finds: a place setting for four with US Lifesaving Station printed on the plate, bowl and cup. The kitchen can be seen at the end of the dining room that also has a smaller table and built-in seating with storage.

Off of the dining room, through double doors, there is a large living area that once housed the boats and equipment used in rescues. Hooks remain on the ceiling where equipment for the rescue boats used to hang. Strategically placed at the southwest end of the room is a fireplace that replaced doors where equipment could be moved in and out. Two outside lights are mounted on one wall in the living room. A nautical scene is enclosed on that same wall in what was once an old fish tank.

Behind a door in the dining room are stairs that lead to the second floor. This part of the house is still a work in progress where Rick is working to return the walls to the original beadboard. At the top of the stairs there is a large room with six beds; three bunks along each of the two long walls. Under each bed is a built in drawer. This was where the Life Saving Station crewmen bunked. Rick and Beth now refer to this room as the “grandchildren’s quarters.” They have five grandchildren. Their son-in-law, Ian can sometimes be found sleeping in the sixth bed. There are two additional bedrooms on this level, nicknamed “the fishbowl” because of the nine windows in that room and the captain’s quarters at the opposite end. Rick and Beth have their bedroom off the dining room on the first floor. 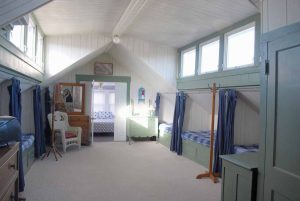 Upstairs bunks where the surf men would sleep.

As with all homes and older ones in particular, there are always fixes and improvements to be made. The Baldts have replaced windows and cedar siding and installed new heating and central air conditioning. The next project will be plumbing. Rick is retired and does many of the projects himself. He spends half of his time here working on renovation projects while Beth, who is a speech pathologist, spends as much time as she can enjoying their home on LBI.

The former owner had an unusual request: Would the Baldts be willing to allow renters who had rented for 50 years to still rent during the summer of 2014? Rick and Beth agreed to the request. Our tour ended at the same side screened-in porch where Rick pointed out an old drying rack on the shutter for a window that will remain original.

Rick says that Beth, who is the voice of reason, needed to think about purchasing this property. The anchor was certainly a sign, and there were also the built-in beds for their grandchildren. As though that wasn’t enough, she walked to the beach past the fishermen’s cottages and cried tears of joy. She discovered a yoga studio a short walk from the house. “Four shore signs” played a huge part in Rick and Beth’s future, and today more than ever, they know that this is exactly where they’re supposed to be!

Although this house is not a typical beach cottage, what is obvious is that the Baldts have found a home where they can make memories that anchor them to the legacy of the Ship Bottom Life Saving Station.