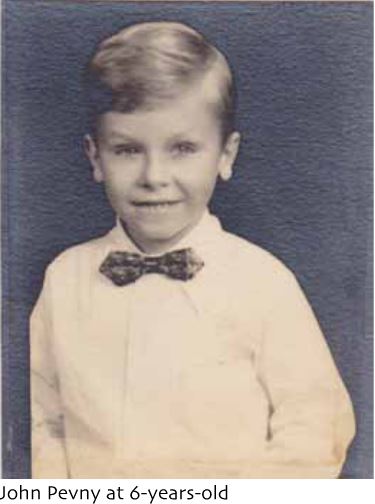 Long before the advent of local convenience stores and the big box stores on Route 72 small stores dotted Long Beach Island’s eighteen-miles, offering everything from food and beach necessities to hardware and sundries. By the 1940s, Beach Haven was already a thriving resort with large hotels, boarding houses and grand Victorian homes. Without modern conveniences, life moved at a gentler pace. Vacationing families routinely enjoyed a walk-about collecting the morning paper, mailing post cards and visiting a nearby grocery or bakery. Warm temperatures and sea shore conditions shortened the already brief shelf-life of most pantry foods, causing many to mold overnight. Food kept in an ice box cooled by just a block of ice spoiled quickly.

Koseff’s, Gerber’s, and Peterson’s in Beach Haven along with other local specialty shops, served the needs of the growing community. The Nor’easter in Beach Haven Terrace, Andy’s at the Light, and the Ships Wheel in Harvey Cedars were mid-sized emporiums. Most other LBI towns had small Mom & Pop businesses on the first floor or front room of the owner’s family home.

Childhood sweethearts, John Pevny and his wife Marie Beisig of New York City, opened John’s Beachwear on South 2nd Street in Surf City in 1947. Located in a typical cedar shake building, hand lettered signage on the front and sides of the building advertised the dizzying array of goods that could be found inside.

Centered between deep display windows, the wooden front door had a jingly brass bell to announce the arrival of customers to the owner who might be out back hanging the laundry or making a meal in the adjacent kitchen. There was a counter down the center for sunglasses and boxes of beach regalia. Racks of swim suits and sweat shirts, sneakers and beach towels overflowed shelves lining the walls. Other goods hung on nails or from the ceiling between dangling light bulbs. Some stores had large tables divided into sections by eight inch boards to form open bins. Tumbled into those bins might be yo-yos or fishing line, dish cloths or hair tonic. Open year round, Marie ordered her inventory from traveling salesmen. Her small shop, like others on the island, supplemented their modest living. John worked many trades and rarely tended the store. He always felt things were too expensive and preferred to give them away. 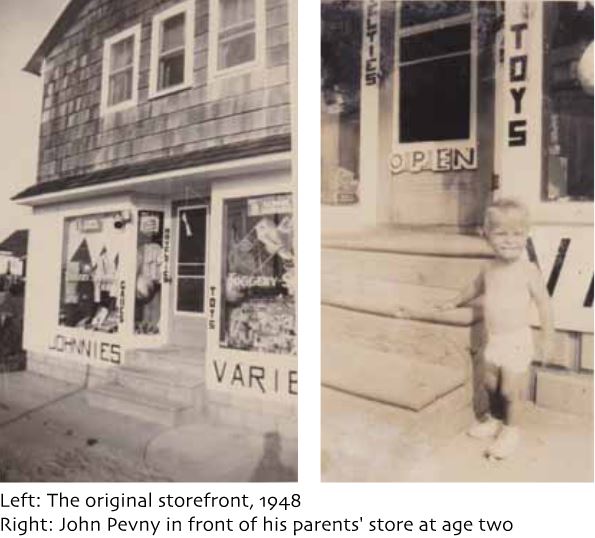 Their only child, Johnny, was born in January 1948. Along with other islanders, he attended Ship Bottom Elementary School – graduating from Southern Regional in 1966. Most children worked in their family shop, enjoying all that the island offered in summer and pursuing hobbies at home. Before battery operated and TV game systems, computers and electronics, most teenage boys were into cars. If the family car had a knocking carburetor or transmission problem, most boys were eager to try their hand at the repairs. Engines weren’t sealed and computerized like today, so maintenance was easier to figure out and gave kids another opportunity to get dirty. When not helping in the store, Johnny followed this trend. Tinkering with cars in the back yard, he learned to dismantle and reassemble motors. This early interest led John to a mechanics course with Mercruiser Outdrives, East Brunswick, New Jersey in 1969. Johnny worked at Predmore – Smith’s Marina, South 1st Street, Surf City. A career followed as a skilled boat mechanic in town until relocating to Cape May in 1986.

By the 1970s, LBI was growing by leaps and bounds. More small businesses and restaurants opened offering products for the growing summer and winter population. What became of John’s Beach Wear? Due to health issues, Marie closed the door of the shop in 1967. Oddly, all the merchandise remained on display throughout the store. As the years passed, through the windows passersby could see swim suits and shirts, towels and tin buckets – everything in the closed store was covered with dust. Eventually the property was sold in 2000, and the old cedar shake building was demolished to make way for new homes.

Over the decades many family-owned shops adjusted their wears to keep up with changing trends, need and wants of summer and year-round residents. Styrofoam boards replaced canvas rafts which in turn led to today’s boogie boards with ankle leashes. Metal sand pails and shovels that rusted by the end of summer, morphed into seemingly indestructible plastics. Armed with sunblock instead of Noxzema or zinc oxide, moms now make sunburned noses a thing of the past.

Today, the many Mom & Pop shops that dot the eighteen-miles of Long Beach Island continue to give personal service and provide unique one of a kind treasures. Visit any one of those shops and you may find the owner is a third-generation proprietor with LBI history to share.