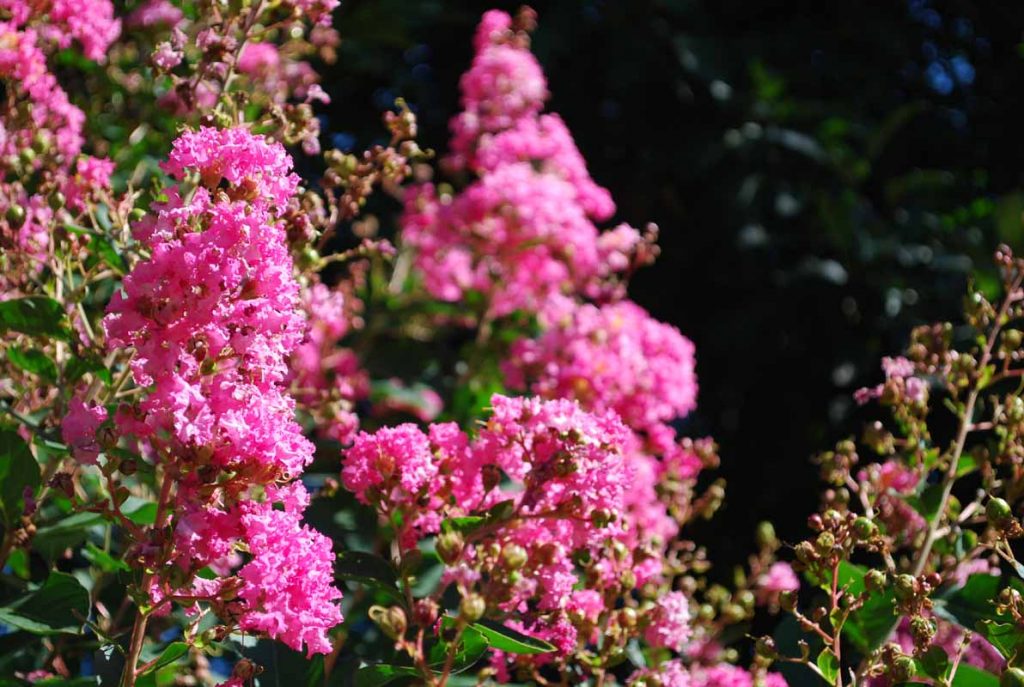 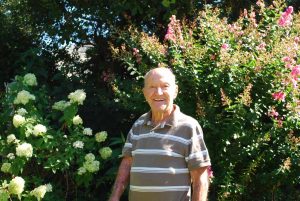 Ed Heitman is a true Renaissance man. Ed first visited Long Beach Island in 1947 and has enriched the lives of many by sharing his art talents for almost 70 years. He spent summers living in Surf City as early as 1959 and later had a contemporary round house built in Barnegat Light in 1961.

When “the love of his life,” a three-story 1886 Victorian, finally came up for sale in 1968, he purchased it. In 1970, he moved in and began to design and nurture the lush garden that surrounds the house today.

Ed’s garden continues to be a labor of love for the artist who is best known for his realistic watercolors. Growing up in Philadelphia, Ed’s father was in charge of the garden. The larkspur that grew there has yet to thrive in Ed’s garden.

Ed spent most of his adult years teaching junior high school art in the Philadelphia schools. After he retired, he volunteered for the Pennsylvania Horticulture shows and spent the following 16 years helping with the world-renowned Philadelphia Flower Show. Ed also taught preschoolers at the Long Beach Island Arts Foundation for many years. 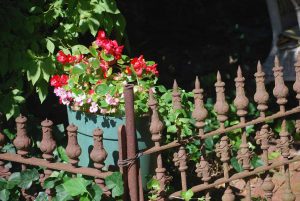 When Ed moved into the home in 1970, only a narrow dirt driveway existed. Four cedar trees and a locust tree had to be cut down to provide additional light for the rest of the property. The lone apple tree was located in the back yard as were hollies, other cedars and some wisteria native to the area.

He gradually designated different areas in the garden and added a gazebo in 1978 that was given a new life after friends were about to discard the intricately forged iron pillars. Another cozy garden section is surrounded by what looks to be rusted gates, originally grills for cellar windows found in a cesspool in Miquan, PA, and cleaned by Ed.

The entire garden area has undergone many changes over the years. Brick edging that used to surround the garden spaces has been overtaken by the plants and is barely visible now. What can be seen are the luscious plants and flowers Ed cares for from early May when he arrives on the island until mid-October when he departs for Warminster, PA.

When he pulls into the driveway in the spring, his car is filled with houseplants eager to make their home on the wrap-around porch. The foxtail fern is one plant that makes the trip annually and has a special place in the corner of the porch beside a unique statue. Many other stone fountains, statues and urns surprise visitors throughout the garden.

While the pink Crapemyrtle (Crape Myrtle, Lagerstroemia indica) is one of Ed’s favorite plants, color comes from the Limelight hydrangea, pink mallows, Phlox, Eupatorium, black-eyed susans and blue morning glories. Lacecap hydrangeas, pink, white and red azaleas, and Clematis are part of the summer and early fall garden. The Clematis provides those taking outside showers with color and a wonderful fragrance. 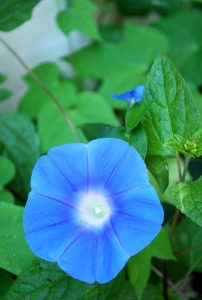 s so they won’t take over, he still nurtures one tomato plant in season. Many of these plants surround a small garage that has become his workshop and framing station over the years. The cedar trees that surround the property were not as tall as Ed when he first moved in, but now are as tall as the house.

Ed’s daily schedule is quite ambitious. He is “bottom up” out in his garden around 6a.m. greeting his flowers, pulling weeds and watering plants until he hears the sound of the boat whistles leaving Viking Village docks at 8a.m. Then he goes inside and makes himself breakfast. If company arrives later in the day, they might be surprised when Ed asks them to join him for an afternoon swim in the ocean.

Ed’s advice for novice gardeners is “Plant anything you’d like and it will grow!” His secret garden has certainly added a lot of beauty to the island over the years.